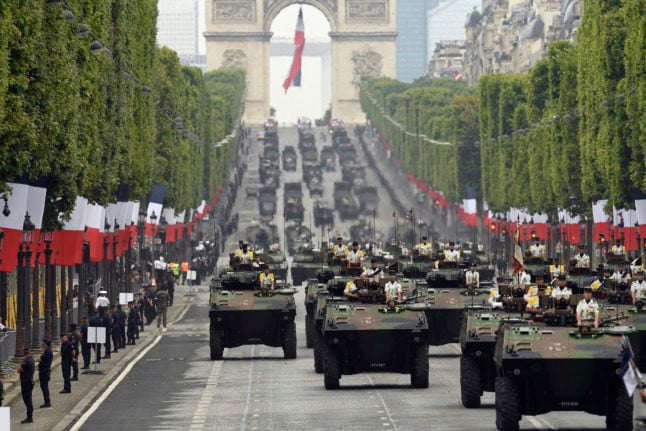 July 14th is a public holiday in France, commemorating the storming of the Bastille that was the symbolic start of the French Revolution. Here’s what’s planned for the fête nationale this year.

The Bastille Day military parade along the Champs-Élysées has been a staple of the fête nationale since 1880, and it will be making a return this year.

The parade was cancelled in 2020 – the first year it hadn’t taken place since the World War II – and was replaced by a smaller ceremony at Place de la Concorde celebrating healthcare workers and others engaged in the fight against Covid.

This time, the spectacle will include 4,300 marching soldiers, 71 planes, 25 helicopters, 221 land vehicles and 200 horses of the Republican Guard. President Emmanuel Macron will be present for the parade, which is set to begin at 10am.

The general public will be allowed to follow proceedings from the Champs-Elysées, while 25,000 people will be able to watch from the seated stands, according to AFP.

Spectators will be required to show a health pass – with proof of vaccination, a recent negative test, or proof they have recovered from Covid – and will also have to wear a mask.

Numbers will be limited, but it is not possible to register for a standing place in advance, so you may need to arrive early to be sure of a place.

As part of the security measures vehicles will be denied access to a large area around the Champs-Elysées.

A number of metro stations will also be closed to the public during the day. These are: Tuileries, Concorde, Champs-Elysées Clémenceau, Franklin D.Roosevelt, Georges V, and Charles de Gaulle Etoile.

Some of the best views of the airshow, which will paint the sky the colours of the French flag at 10.30am, are to be had from the Grande Arche de la Défense. The rooftop of the Grande Arche will be open to the public and offers stunning views over the Champs-Elysées.

The same location was also set to host DJ sets from the Doppelgänger brothers and Bob Sinclair in the evening, but these have been cancelled due to the spread of Covid in the Paris region.

For the ninth consecutive year, celebrations will continue with a classical music concert on the Champ-de-Mars at the foot of the Eiffel Tower.

The concert will feature the Orchestre national de France, the Chœur and the Maîtrise de Radio France, and will be broadcast live from 9pm on France Inter and France 2.

There is no need to register – anybody is free to turn up at the Champs-de-Mars and follow the concert, but you are invited to arrive 45 minutes early to allow time for security checks.

READ ALSO France’s biggest celebration: What you need to know about Bastille Day

Last year, the concert took place with a virtual audience only.

For the first time this year, the Fip radio station will also be organising a “before show” on the Champs de Mars – a 45-minute DJ set which will begin at 7:30pm.

Of course, no July 14th would be complete without the traditional fireworks display. Last year, crowds were banned from gathering to watch the spectacle, but this year, locals and visitors are invited to follow along from Paris’s parks.

Several towns including Lille have decided to cancel the fireworks, amid fears over the spread of the delta variant of Covid. On Sunday, local authorities in Paris confirmed the show would be going ahead, but warned that spectators will have to wear a mask while gathering on the Champ-de-Mars.

“Place du Trocadéro is the best place to witness the pyrotechnics,” the local tourism office advises.

Similar displays will illuminate the sky in towns all across France, but beware – certain local councils will require attendees to show a health pass, with an up-to-date negative Covid test or vaccination certificate, so be sure to look up the local restrictions before heading out.

One of the most cherished Bastille Day traditions is the bals de pompiers, or parties in fire stations.

These are not explicitly banned this year, but in the context of the health situation, many areas have decided not to stage them.

Cities including Paris, Nantes and Strasbourg have cancelled for the second year in a row, but other areas may still be holding scaled down social events.

Anne Hidalgo, the mayor of Paris, does not lack courage.

Fresh from her 1.7 percent score in the presidential election, she plans to destroy a Parisian icon: the 12-lane traffic jacuzzi which surrounds the Arc de Triomphe.

Mayor Hidalgo is already under fire for her other assaults on the Parisian streetscape. Personally, I have no problem with the proliferation of cycle lanes. I do object to the bizarre, new forms of street furniture which have replaced some traditional benches and street-lights.

But now the mayor has finally gone too far. The traffic free-for-all at the Etoile at the top of the Champs Elysées is as emblematic of Paris as the Eiffel Tower or the triumphal arch which stands in the centre of this maman et papa of all roundabouts.

Ms Hidalgo plans to reduce the space for traffic by one third, reducing the number of theoretical lanes from 12 to eight. The work is to begin almost immediately as part of a bigger plans to make the Champs Elysées smarter and greener before the Paris Olympics in 2024.

READ ALSO: How Paris plans to transform the Champs-Elysées

That is all very well but she is destroying a symbol of Parisian exceptionalism, a microcosm of France, an automotive wonder of the world.

How on earth do you drive around a twelve-lane roundabout where there seem to be no rules?

The answer is that there are very strict rules and that just enough people obey them to allow the rest to do as they please.  The Etoile is a mini-France: a blend of brute individualism with the Republican values of mutual respect and solidarity.

In the last 24 years I must have driven around the Etoile at least 5,000 times. Each time I approach, I feel my knuckles clench on the steering wheel, as if I were in a bomber approaching its target zone. I have never had an accident. I have only once seen an accident.

In theory, priority is always from the right. Some people, like me, charge into the centre, trusting that the other traffic will give way as it is supposed to. I then try to twist and turn my way out.

A few, like my ex-neighbour Bénedicte, wander around the outside, blocking all the exit and entrance lanes in turn. Challenged on her anti-social technique, she said: “Rules? You have to be an imbecile to obey the rules.”

Reducing the Etoile to eight lanes, when there are 12 avenues radiating from it, sounds to me like a blue-print for disaster. The strange blend of rules and rule-breaking, conventions and moods which govern the place will be catastrophically disturbed. 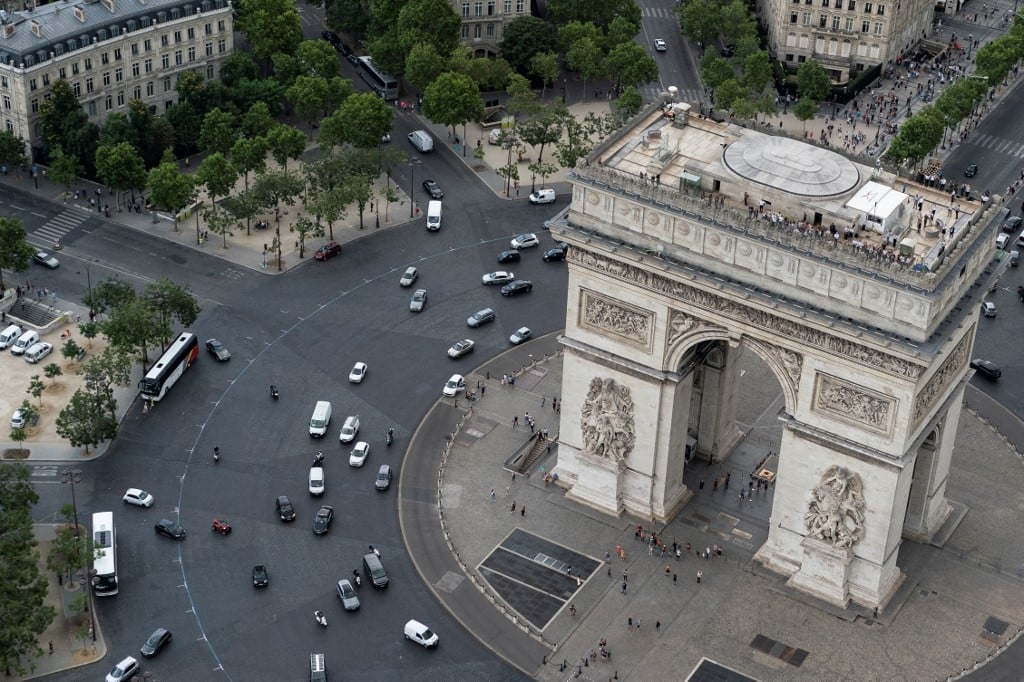 The Etoile has some claim to be the world’s first roundabout (other candidates exist).  Until 1907, the traffic, mostly horse-drawn was allowed to go around in any direction that it fancied. That must have been fun.

Eugène Hénard, the architect for the City of Paris, ordered that traffic should go around anti-clockwise and make way for vehicles entering from the right.  And so it has been ever since.

Until the 1970s, other roundabouts – “rond-points” or “carrefour giratoires” (circular cross-roads) – were rare in France. Half a century ago, it was decided that too many people were killing themselves on ordinary cross-roads because they ignored or got confused by the rule awarding priority to the right.

Since then France has undertaken a monumental programme of roundabout building. The country now has at least  30,000 roundabouts and some people insist 40,000. Even accepting the lower figure, France is reckoned to have half of all the roundabouts in the world (three times as many as the UK).

Another 500 roundabouts are built in France each year. Every small town wants at least one. They have lyrical names like Rond Point des Lilas. They are sometimes decorated with sculptures. They often have flower-beds. During the Gilets Jaunes movement  in 2018 and 2019, they became the multiple epicentre of social rebellion.

But these are not charge-on and hope-for-the-best  roundabouts like the Etoile. You have tamely to give way to the traffic already on the rond-point. They are, I fear,  polite and predictable and unFrench. They are almost British. (It was in fact Britain which invented that kind of roundabout in the 1920s.)

I would beg Anne Hidalgo to reconsider her decision to truncate the Etoile. She has charged into this decision without giving a thought to the priority that should be accorded to French or Parisian history and tradition. She might as well have decided to remove the top storey from the Eiffel Tower.

An eight-lane Etoile would no-longer be a shining star of French exceptionalism. It would be a dwarf star, even a black hole.