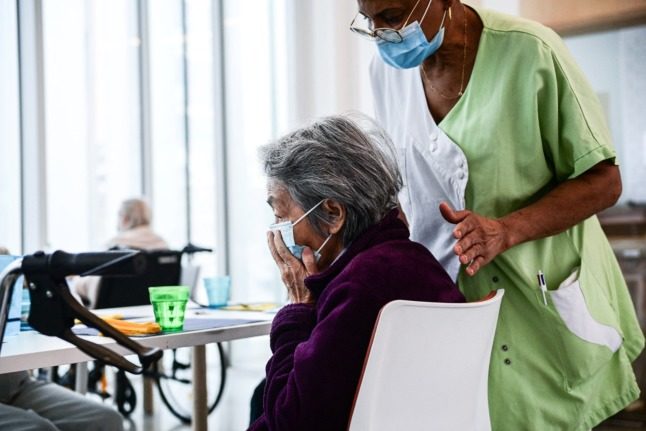 With vaccine rates among healthworkers lagging behind that of other sections of the population – and reports of a cluster of cases of the Delta variant in a care home spread by an unvaccinated care worker – calls are growing to make the injection compulsory for anyone working in healthcare.

According to French newspaper Le Parisien, a bill is being prepared and could be brought to parliament for a vote as early as July, although a September date is more likely.

Franceinfo also revealed that Prime Minister Jean Castex had sent a letter to parliamentarians, in which he expressed his wish “for a debate on obligatory vaccinations to be had”.

“You will also want to tell me if this obligation should be rolled out more widely,” Castex is reported to have written.

Earlier this week, the Prime Minister announced that he would be launching a consultation on the topic with local officials and the leaders of the different parliamentary groups, “in the coming days”.

“Regarding the vaccination of healthcare workers, particularly in care homes, but not only, I’ve changed my opinion: I was against an obligation, but it seems to me that we’ve now reached a level where we have to consider making it obligatory,” he told France Inter.

Currently only 57 percent of care home workers and 64 percent of workers in healthcare facilities have received at least one injection.

READ ALSO Why are French health workers so reluctant to get the Covid vaccine?

In June, a cluster of the delta variant of Covid developed in a care home in the Landes department of south-west France, infecting 23 residents and six healthcare workers. Health minister Olivier Véran said the virus entered the facility via an unvaccinated carer.

“Who could understand that the virus can enter a care home, where you find the most fragile people, through those whose job it is to protect them?” the Prime Minister said. “By the end of the summer, vaccination must be more or less total, otherwise, we’ll have to assume our responsibilities.”

The Hospital Federation of France on Wednesday called on the government to make the vaccine obligatory for healthcare professionals.

In a press release, they called for the measure “to be implemented through legislation with a clear time frame, allowing establishments the time to conform with this obligation right away, without waiting for September.”

“We don’t have a strict enough policy in France,” Françoise Salvadori, lecturer in immunology at the University of Burgundy, told the Local last week. “There are too many health workers who aren’t vaccinated.”

A poll published in franceinfo and Le Figaro on Thursday showed that 72 percent of French people were in favour of compulsory vaccines for health professionals, and 58 percent supported extending the measure to the entire population.

READ ALSO What lies behind the slowing of vaccination rates in France?

On Thursday, senator Bernard Jomier, head of a group responsible for evaluating the country’s Covid measures, recommended making the jab obligatory for all adults under the age of 60.

Even before France’s vaccine rollout had begun, a number of politicians, including the Green party MEP and potential presidential candidate Yannick Jadot, were calling for the government to make it obligatory, fearing the consequences of French resistance to vaccines which predates the current health crisis.

While vaccine scepticism has decreased in the last year, health authorities believe the rollout is not progressing quickly enough to avoid a fourth wave of the pandemic in the autumn.

It is believed 80 percent of the population would need to be vaccinated to bring an end to the pandemic. Currently, 34 percent of people in France are fully vaccinated, while 51 percent have received at least one dose.