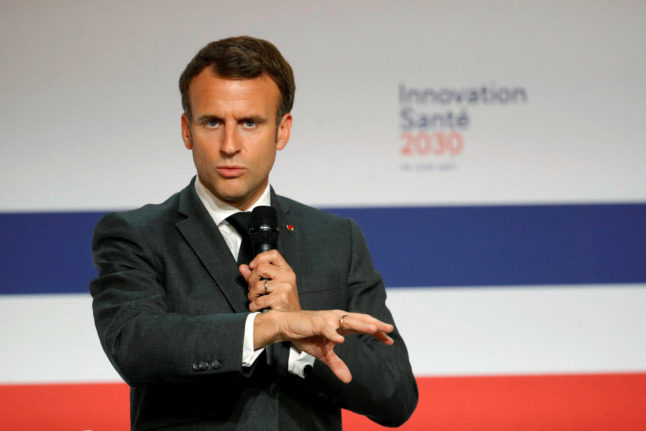 The plan is meant to address deficiencies revealed during the Covid-19 pandemic and comes alongside a nationwide consultation on more practical healthcare matters such as funding for community healthcare and pay and conditions for staff.

Here are the key takeaways of Innovation Santé 2030, which is funded with €4 billion of State investment and another €4 billion of private money.

“We are breaking a cycle of two decades of deflation in research,” Macron said. The new investment plan will include €400 million for “priority research programmes”

A further €600 million will go towards the creation of “health clusters”, where hospitals, researchers and businesses can cooperate in specific domains, with the goal of creating “a few French Bostons” – modelled after innovation hubs in the US city of Boston.

€300 million will go towards research infrastructure, including databanks.

The programme is also a response to the problem of brain drain, with many French scientists preferring to work in other countries. From the Autumn, 15 to 20 “talents”, from France or abroad, will receive between €3 million and €5 million to settle in the country and create their laboratories. “We need superstars,” Macron said.

Biotherapies made in France

A particular focus was placed on biotherapies (the use of substances made from living organisms to treat disease). The French state will invest €800 million in this area, with an extra €2 billion coming from private companies. Macron said he wants to double the number of jobs in the sector, and create five new biopharmaceuticals, within the next five years.

The investment package is in large part a response to the lessons of the past year and a half, and the government is hoping to be more prepared if similar pandemics were to strike in the future. The President admitted that the “nation of Pasteur” had lagged behind other countries in the development of a Covid vaccine.

“I don’t want to relive what I experienced,” Macron said in reference to the beginning of the health crisis. “We need to anticipate the features of the next 10 most dangerous viruses, and have, almost on the shelf… appropriate treatments and vaccines which are at least in the preclinical phase.”

The Elysée has since confirmed that €750 million will be allocated to researching infectious diseases, according to AFP.

Also featured in the programme are €600 million of public funding, and €1.5 billion of private investment, which will go towards accelerating the use of digital data in the health field.

“We have two advantages,” Macron said. “France is not behind in this area… and we are a formidable centralised state. All the people who love federal states should see how they handled Covid elsewhere.”

An agency for innovation

In addition to providing extra funding, the innovation plan is an attempt to transform the organisational structure of the French healthcare system. Macron was particularly critical of inefficiencies revealed during the pandemic. “The energy that we expended was not proportionate to the results that we obtained,” he said, blaming a lack of investment, slow processes, and poor cooperation.

To help with coordination efforts, Macron announced the creation of a new Agency for innovation in health, which will oversee many of the measures in the new programme.

There are also plans to speed up clinical trials for new treatments, with more treatments fast-tracked when they can bring about significant human benefits. In addition to doubling the number of trials which reach completion in the next three years, Macron said he wanted to create a “cultural” link between medical advances and local doctors.

READ ALSO What lies behind the slowing of vaccination rates in France?