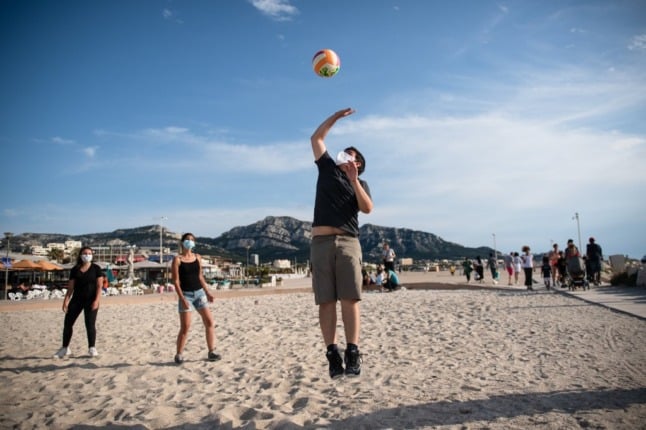 The highly contagious variant of the virus, originally identified in India, is responsible for 70 percent of new cases in the Landes départment in south west France, government spokesman Gabriel Attal confirmed after the weekly Cabinet meeting, and between 9 and 10 percent of cases on a national level.

Just one week ago, the variant accounted for 2-4 percent of cases in France.

The same variant is behind the surge in cases in the UK, where it is now the dominant variant of the virus.

“We see what is happening in the United Kingdom, where there has been a continuous increase in cases for several weeks,” Attal said.

“We can see that things can go very quickly, so you have to be very vigilant. This is why we have set up in France a progressive calendar for lifting restrictions, which we are going through step by step.”

As well as repeatedly calling for “individual and collective vigilance”, he also insisted that France has “a weapon that we did not have a year ago: vaccination”.

ALSO READ: Face masks to cafés: What Covid-19 rules are still in place in France?

“The more French people are vaccinated, the more we will be able to protect ourselves against the epidemic, including any variants.”

His comments came as the director of the European Centres for Disease Control (ECDC) warned that one dose of the vaccine is not enough to protect against the Delta variant, and that the virus was expected to circulate widely among unvaccinated people during the summer.

Landes is currently the only départment in France where the number of cases per 100,000 people is over 50, triggering an official alert. The nationwide average for cases is 24 per 100,000.

The below chart from Le Parisien’s health reporter Nicolas Berrod shows the incidence rate in France compared to Landes.

Prime Minister Jean Castex and Health Minister Olivier Véran will travel to the southwestern department on Thursday to launch France’s expansive summer Covid-19 tracing system intended to ensure the holiday period is as safe as possible.

France will also implement a mass localised vaccination strategy — already used in Brittany and Bordeaux — in areas where clusters of the Delta variant are identified, following advice from the Haute autorité de santé.

As well as Landes, the Bas-Rhin département – home of Strasbourg – is under close scrutiny, as clusters are monitored across the country. The Delta variant also accounts for 12 to 13 percent of new cases in the greater Paris Ile-de-France region.

Health authorities are calling for people in France to be fully vaccinated to avoid a new wave of the virus in September, when schools reopen.

At a press conference on Tuesday, Véran said: “We have the doses, we have the organisation, we cannot lose this opportunity.”

Nearly 32.5 million  people in France have now received a first dose, according to government figures from June 22nd, and 19.2 million people are fully vaccinated.

About four million people are being vaccinated each week, Véran said, despite a recent fall-off in the number of people making appointments.

Meanwhile, the director of the ECDC has warned that the Delta variant can affect people who have had one dose of vaccine.

In a statement, Dr Andrea Ammon said: “Variants of SARS-CoV-2 are emerging at a significant rate worldwide. ECDC is constantly analysing the characteristics of these variants to rapidly inform public health authorities in the European Union. Some variants can put our efforts to control the pandemic at risk and require immediate actions.

“Based on available scientific evidence, the Delta variant is more transmissible than other circulating variants and we estimate that by the end of August it will represent 90 percent of all SARS-CoV-2 viruses circulating in the European Union.

“Preliminary data shows that it can also infect individuals that have received only one dose of the currently available vaccines.

“It is very likely that the Delta variant will circulate extensively during the summer, particularly among younger individuals that are not targeted for vaccination. This could cause a risk for the more vulnerable individuals to be infected and experience severe illness and death if they are not fully vaccinated.

“There are still too many individuals at risk of severe Covid-19 infection whom we need to protect as soon as possible.

“Until most of the vulnerable individuals are protected, we need to keep the circulation of the Delta virus low by strictly adhering to public health measures, which worked for controlling the impact of other variants.

“It is very important to progress with the vaccine roll-out at a very high pace. At this stage it becomes crucial that the second vaccination dose is administered within the minimum authorised interval from the first dose, to speed up the rate at which vulnerable individuals become protected.

“I am aware that it requires a significant effort from public health authorities and the society at large to achieve this goal. But now is the time to walk the extra mile. We have several safe and effective vaccines available and every single infection prevented now through our compliance with public health measures, is a life that can be saved by vaccination.”