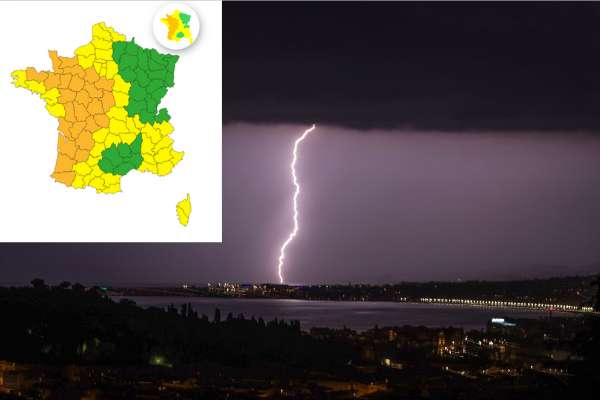 Days of sweltering temperatures across much of France will peak on Wednesday afternoon with the Mercury set to top 33C in parts.

But Météo France, the country’s weather agency, warned the public to expect violent storms to then move in.

Twenty-eight départements in the west of the country were put on “orange” alert for storms – the second highest warning level.

Downpours and strong winds are forecast and even hail showers.

Members of the public are advised to take shelter indoors, stay away from trees and river banks which may experience flash flooding.

The areas initially at risk were Brittany and parts of Normandy, which will be followed by a large part of the southwest and départements on the border with the Paris region of Île-de-France in Wednesday evening.

The Météo France forecast said “locally, the storms could result in significant downpours of up to 40 to 50 mm of rain.”

“Violent storms are expected to move north from the Basque Country and spread over Aquitaine, Poitou-Charentes, part of Limousin, the Centre region, Anjou, and then the south of Normandy. They could also cause hailstorms and intense electrical activity. Strong winds could reach 100km/h. The activity of these thunderstorms will gradually weaken during the night and will be slightly milder by the time they reach the Paris region.”