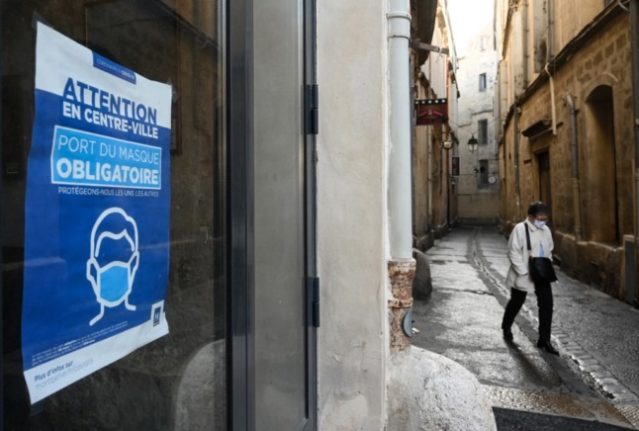 The mask requirement in the streets could be dropped. Photo: Pascal Guyot/AFP

Wearing a mask outdoor should no longer be required as soon as July 1st “if the health situation allows it”, Salomon told  RTL radio.

However, “wearing a mask indoors will remain an obligation,” he said, adding that social distancing measures will still have to be respected.

His comments echo those of several other senior French politicians who have envisaged the relaxation of outdoor mask rules over the summer, although this is the first time that a specific date has been mentioned.

In May, Minister of Health Olivier Véran said wearing masks outdoors “could end soon,” adding it depended on the vaccination rate and if the number of cases continued to fall.

Case numbers in France continue to fall sharply and the national incidence rate has fallen to below 50 cases per 100,000 people for the first time since August 2020.

Masks are compulsory in all indoor public spaces in France, including workplaces, shops and on public transport.

Mask rules in outdoor public spaces are a matter for local authorities, although almost all authorities introduced a rule in August 2020, after Prime Minister Jean Castex called on them to introduce local restrictions.

In recent weeks, several local authorities have relaxed their rules on outdoor mask-wearing.

The Alpes-Maritimes département, which includes Nice, relaxed the obligation to wear masks on the beach, along the coast and green spaces on May 4th.

Since May 20th, wearing a mask on Biarritz’s waterfront in the Basque country is no longer mandatory, but it is still required in the city centre, around schools and markets.

In the city of Bourges, in central France, the préfecture lifted the obligation in the city centre on May 27th, but people still have to wear a mask on public transports, in train stations and in markets.

In the département of Bouches-du-Rhône – which includes France’s second biggest city Marseille – local authorities ended the outdoor mask rule on beaches, in parks, gardens and forests on June 2nd.

In the département of Savoie in the French Alps, wearing a mask outdoor ended on June 10th, except in some towns and major cities such as Chambéry.

Wearing a mask is no longer mandatory in the départment of Lozère in the Occitanie region in Southern France, in the city of Arcachon on the Atlantic coast and in communes with fewer than 10,000 inhabitants in the Puy de Dôme départment.

Everywhere else masks remain compulsory outdoors, including in Paris.

Failure to comply with local or national mask rules can net you a €135 fine.