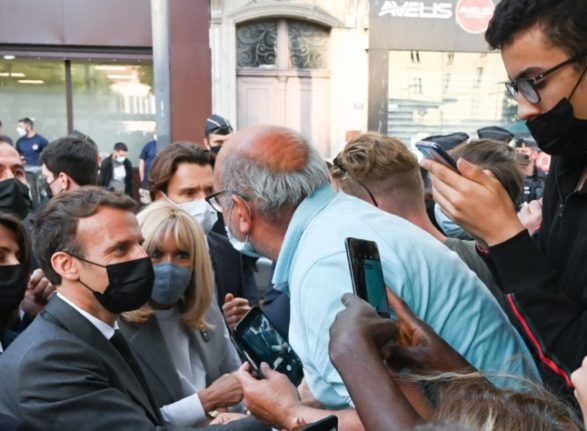 Macron shrugged off his assault on Tuesday in the village of Tain l’Hermitage, calling it an “isolated event” and “stupidity”, and he went to chat with and fistbump onlookers later in the day in the nearby town of Valence.

“Obviously his trips are going to continue: the president will remain in contact with the French public,” government spokesman Gabriel Attal said on Wednesday.

“It would be completely incomprensible for people to be deprived of contact with the president because of an isolated individual who wanted to challenge” him, Attal added.

Macron’s assailant, a 28-year-old man identified as Damien T., remained in police custody on Wednesday and is expected to be charged with assaulting a public figure, which carries a maximum three-year prison term.

He has been described as a fan of medieval martial arts and board games, while the French media raked over his social media activity looking for clues to his political sympathies.

He is a subscriber to several far-right YouTube channels.

Popular evening talkshow Le Quotidien aired footage of one of its journalists meeting Damien T. and friends earlier in the day on Tuesday.

One of the friends, who says he identifies with the anarchist movement, explains that they have come to speak to Macron about the “decline of France”.

Police sources said that Damien T. had no criminal record.

The slap has led to debate about whether it is safe for Macron to continue spontaneous meetings with members of the public.

The centrist began a nationwide tour of France last week, promising to “take the pulse” of the country a fortnight before regional elections and 10 months before a presidential vote.

He is widely expected to seek a second term in April and May next year, with polls giving him a narrow lead over far-right leader Marine Le Pen.

The 43-year-old former investment banker decided to get out of his car to greet onlookers on Tuesday who were calling his name after a visit to a school in Tain l’Hermitage.

In footage of the incident, he can be seen striding over to a barrier, with his security detail behind him, before greeting Damien T., who grabs him with his left hand and strikes with his right.

Experts highlighted on Wednesday how French security services advise French presidents on their safety, but do not have authority or powers to prevent them putting themselves in danger.

“In the United States it’s the opposite: the Secret Service decides if a trip is seen as too dangerous and no one opposes them, not the people in charge of protocol or even the president,” Jean-Pierre Diot, a former member of France’s specialist VIP police protection force, told Le Parisien.

“The Americans have a history of attacks,” he added.

Macron has been regularly booed and heckled in the street since coming to power in 2017, above all by anti-government “yellow vest” protesters, but he had never been physically assaulted before Tuesday.

The country has faced a string of Islamist attacks in recent years and Macron has been personally targeted during demonstrations in Muslim countries over his defence of French secularism and the right to blaspheme.