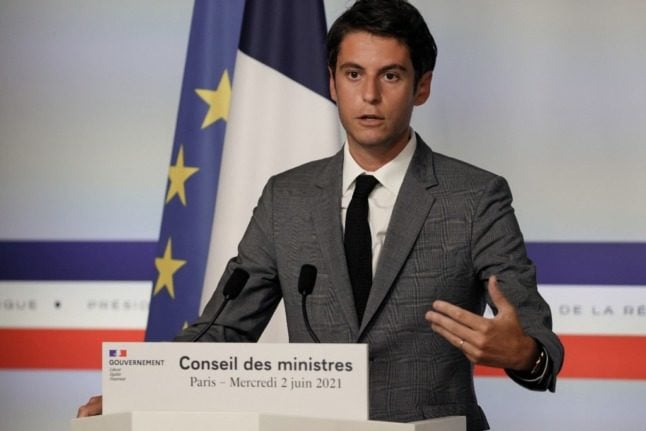 The national incidence rate of the virus has fallen below 70 per 100,000 people, government spokesman Gabriel Attal said at the press conference after the weekly cabinet meeting.

“Only four départments have an incidence rate above 100,” he said.

Attal, speaking after the first cabinet meeting that all ministers had been able to attend in person since last October, said: “On a personal level, there is a pleasure in meeting again,” he said.

But he warned: “We must not believe that improvement means the end of the epidemic.”

President Emmanuel Macron said something similar earlier in the day.

“For this recovery to be sustainable, let us continue to respect protocols and barrier gestures,” he wrote as he hailed the latest phase of reopening on Twitter.

Health Minister Olivier Véran had previously welcomed the latest news, which he said showed ‘a very favourable trend’, even in the southwest of the country – where cases were rising as recently as last week.

“Cases are falling at almost 40 percent from one day to the next, from one week to the next,” he said during a visit to Roland-Garros to see the early use of France’s pass sanitaire (health passport) which is now in force for large events.

“We are at some 6,000 diagnosed cases a day now, an incidence rate below 70 per 100,000, including in regions in which we had issued an alert last week – Nouvelle-Aquitaine and in certain départments in Occitanie.

“There, again, we have resumed a downward dynamic.”

The number of Covid-19 patients in intensive care, meanwhile, is now at a level not seen since last summer, Véran added, welcoming the latest phase of reopening, which he described as “an important day for French gastronomy and commercial activity”.

“This is good news – we owe it in particular to vaccination.”

While Véran was at Roland-Garros witnessing the start of the health pass scheme for large events, France’s tourism secretary Jean-Baptiste Lemoyne was on a Parisian rooftop, announcing the country’s reopening to overseas tourists.

Like Véran earlier, Attal praised the “mobilisation of all” French people in the latest positive health indicators. “This June 9th is no longer just a foretaste, but a taste of the life we used to live,” he said.

“The health pass is freedom, it is the ability to go to large gatherings. It’s what allows all life to resume, it’s what allows us to enjoy culture and sport in their fullness again.”

The government’s priority now, he said, was helping businesses being to reopen successfully. “We are moving from ‘whatever it costs’ to ‘whatever happens’.”