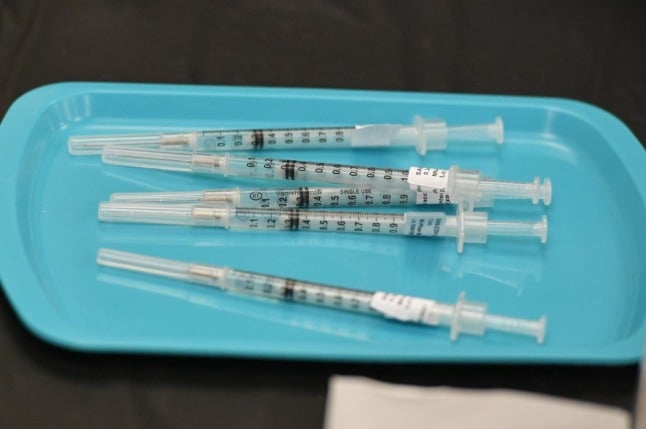 In common with most countries, France is at present only vaccinating adults, but work is already being done on a plan for the under 18s.

Here’s what we know so far:

At present, children aged 16 and 17 can receive a Covid vaccine in France if they have a serious underlying illness, such as cancer or transplant patients. Otherwise, vaccines are reserved for the over 18s.

READ ALSO Who is eligible for a Covid vaccine in France?

France, in common with most other countries, began by vaccinating the groups most at risk of developing the most severe forms of Covid, such as the elderly or those with with underlying health conditions.

Studies have shown children who catch the virus generally get either mild or no Covid symptoms – although there have been rare cases of serious illness and deaths – but they can spread it.

The European Medicines Agency has now approved the Pfizer BioNTech vaccine for use on the 12-15 age group. It was already approved for 16-18-year-olds.

The French vaccine programme is heavily dependent on Pfizer’s vaccine, so this approval was key. Both the AstraZeneca and Johnson & Johnson vaccines are only licenced for over 55s in France.

The French medical regulator is yet to publish its opinion on the use of Pfizer for under 16s and it does not automatically follow the EMA’s ruling, but in this case it is expected to approve Pfizer for the 12-15-year-old age group.

As mentioned, seriously ill 16 and 17-year-olds can already be vaccinated, but discussions are ongoing about opened this up to everyone in that age group.

France’s vaccine co-ordinator Alain Fischer said on Monday that it was “a matter of days” until an announcement is made on this subject.

He told LCI radio: “For 16-17 years-olds, we have all the authorisations, in any case for the Pfizer vaccine. So I think it’s a matter of days.

“The option is on the table for adolescents in this age group to be vaccinated at the very beginning of the summer.”

For under 16s, the consensus seems to be that it will happen, but what is less clear is the time-frame.

This may depend on the number of available doses and how the rollout of vaccines to adults goes. France’s next target is to have given at least one dose to 30 million adults – around 60 percent of the adult population – by June 30th. If the current vaccination rate continues, this target will be hit.

The next target is to have offered a vaccine to all adults who want one by August 31st.

The choice for the government is whether to wait until all the adults who want a vaccine have got one before opening up to under 16s, or whether to run the vaccinations of children in parallel with adults.

Prof Fischer seemed keen to open up the programme to children as soon as possible, saying: “Young adolescents also transmit the virus. So if they get vaccinated, we limit transmission, and they will participate in the collective immunity.”

The general consensus is that 80 percent of a country’s entire population (children and adults) need to be vaccinated to achieve collective immunity.

The French medical body Académie nationale de médecine has also recommended vaccinating children as quickly as possible to increase collective immunity, declaring: “The extension of vaccination against SARS-CoV-2 to adolescents and children should be considered as soon as the vaccine protocols are approved for these age groups.”

As well as the benefits to collective immunity, there is also the disruption of education to consider.

Although France had among the fewest school closure days in Europe over the course of the pandemic, education was still disrupted by the closure of all schools in spring 2020 and then a three-week closure around Easter in 2021. On a local level, many schools have had to close classes after outbreaks of the virus among pupils or teachers. Arnaud Fontanet, an epidemiologist at the Pasteur Institute and member of the Scientific Council, writes in French newspaper the Journal du Dimanche: “Let’s look ahead to the autumn.

“By that time, since a large proportion of adults will have been protected, secondary schools will be the main places where the virus circulates.

“If even more contagious variants were to enter the game, there would be new pressures on hospitals. It would not necessarily be a fourth wave, but the risk of having to close schools would reappear.

“A consequence that is of course damaging for schooling but also for the mental health of those concerned. Paediatricians tell us that although the majority of teenagers have minor forms of Covid and paediatric multisystemic inflammatory syndrome is rare, more and more of them are suffering from psychological disorders such as anxiety, depression or anorexia.”

The other thing the government will need to take into account is vaccine hesitancy. Although this has fallen dramatically in France since the beginning of the vaccine rollout – from 40 percent of people to 20 percent of people saying they do not intend to be vaccinated – how parents feel about having their children vaccinated is at present unclear.

The fact that children do not themselves tend to suffer from the severe forms of Covid could lead parents to be more wary of having them jabbed.

Clinical trials conducted in the USA on the 12-15 age group found that children are less likely to suffer from common side effects of the vaccine including headaches, fevers and fatigue while no severe side effects were reported in the trial group of 2,200 teenagers.

There are 11 vaccinations that are compulsory for anyone registering a child in school in France, including vaccines against measles and polio. However, there has been no suggestion that the Covid vaccine will be made compulsory for children, as it is voluntary for adults.

For international travel, France’s health passport requires either a vaccination certificate or a negative Covid test for all over 11s. Therefore until vaccines are rolled out to under 18s, children aged between 11 and 18 face a Covid test if they want to travel into France.

The final decision on both the policy and the timeframe lies with the government.

PARTNER CONTENT
Winter is coming: How to stay happy and healthy
Url copied to clipboard!