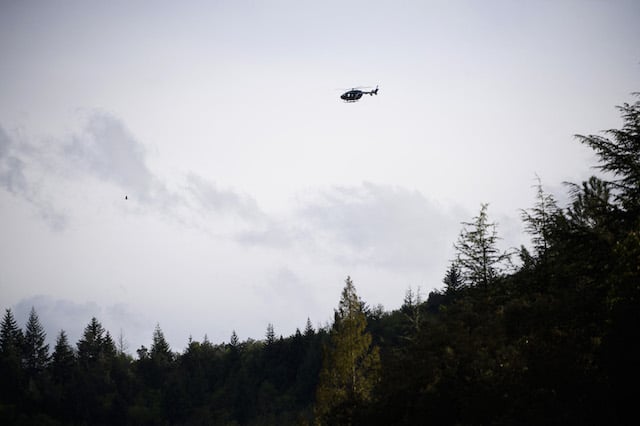 A helicopter of the French gendarmerie during the manhunt. Photo: CLEMENT MAHOUDEAU / AFP

The armed man, a former soldier, had been involved in a family row in the village of Lardin-Saint-Lazare, after which he shot at gendarmes, before fleeing the scene.

According to BFMTV the man had entered his ex-partner’s home between Saturday night and Sunday morning, and attacked her new partner. The young woman, who lived in the house, then fled the scene, but was chased by her former partner.

The suspect, aged in his 30s, wandered through the streets of the village and shot at the gendarmes who had been called to the scene.

The man was thought to be hiding out in a nearby forest. Some 210 gendarmes, including members of the Dordogne gendarmerie group as well as the GIGN and a local negotiator, were deployed, as well as four helicopters.

General André Pétillot told BFMTV: “Our objective is to get him to surrender, but it is an extreme situation. He shot at the officers numerous times, but so far no one has been wounded. He is carrying a large hunting weapon of a caliber large enough to kill”.

Mayor of Lardin-Saint-Lazare, Francine Bourra also told BFMTV: “The suspect is not at all inclined to enter into dialogue and is not ready to surrender. I believe that unfortunately, it will last a long time”.

According to BFMTV, French Interior Minister Gérald Darmanin has been following the gendarmes operations very closely.

Darmanin said “the suspect appears to be very determined” but that the gendarmerie “would deploy all necessary means” to catch the suspect.

Already known to the police for domestic violence, the suspect had been prohibited from approaching the home of his former partner.