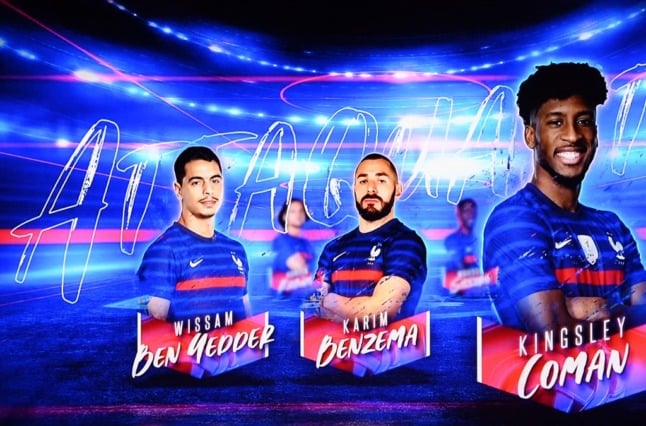 France's multi-racial football squad are among the favourites to win this summer's tournament. Photo: Franck Fife/AFP

In my excessively long career as a journalist, I have rarely been a sports reporter. I did, however, cover a handful of minor matches during the 1998 football World Cup, which was hosted by France and won deservedly by the host country.

Apart from my amateurish attempts at live football reporting that summer – Jamaica v Croatia; Iran v the United States – I wrote much political analysis on the “brown, white, black” French team which beat Brazil 3-0 in the final.

Two years earlier the far-right leader Jean-Marie Le Pen had mocked a similarly multi-racial, French team as an “artificial” bunch of foreigners “baptised France.” They ought, he said, to be “called something else”.

Would the success of Zinedine Zidane, Marcel Desailly,  Didier Deschamps and others shut up Le Pen, I and others wondered in 1998? Would they help brown and black kids in the inner suburbs to feel more French? Would they give white kids in richer suburbs or in the countryside role models from within France’s migrant communities?

It is now 23 years since the “blanc-noir-brun” triumph at the Stade de France. What do we find?

Another multi-racial squad of wonderful French footballers are joint favourites (with England) to win the European championship next month (delayed from last summer but still called Euro2020).

Another Le Pen is appealing to racial instincts and fears to stir up trouble.

Marine Le Pen is, in some respects, cleverer than her papa. She does not openly suggest that only white footballers have the right to wear the blue jersey of France. She, and her acolytes, seize on more complicated issues on which to manipulate racial fears and resentments. First issue: an African-born rapper, Youssoupha, has written the official battle hymn for the France team and their fans.

Second issue: one of the most talented French footballers of his generation, Karim Benzema, born in Lyon of Algerian parents, will return after six years of exile from Les Bleus to lead the France forward line (as we used to say in the 1960s) in Euro 2020.

Neither case is straightforward. In both cases legitimate questions can be asked about the decisions taken by the French football authorities. In both cases, the motives of Le Pen and her party are political and racist rather than legitimate or sporting.

Youssoupha wrote some rap lyrics 14 years ago which seemed to threaten sexual violence against Madame Le Pen. None of his more recent work is violent in tone or content.

His anthem for Euro2020, “Ecris mon nom en Bleu”  (write my name in blue“) is an appeal for national unity in support of a team which comes from “des campagnes et des quartiers”  (the countryside and suburban housing estates). The squad of 26 represents, the song suggests,  a “better blend” because it includes a “taste of elsewhere and a taste of France”.

Karim Benzema faces trial in October for his alleged part in an attempt by people that he knew to blackmail a France team-mate with a sex-tape in 2015. He says his actions and motives have been misinterpreted. His behaviour was, at the least, stupid and clumsy.

Why bring him back now, just before the trial? Official Answer: Benzema has been exiled for long enough. Unofficial answer: France has no other prolific goal-scorer.

Some of the Lepennist attacks on Youssoupha’s anthem – including a tweet by Marine Le Pen herself – concentrate on his verbal violence against her in 2007. Others focus on the fact that a rap song was chosen at all and the offensive – to some – words “blend” and “taste of elsewhere”.

The number two in the Rassemblement National, Jordan Bardella, said the anthem represented a “surrender to the scum part of France.” The word he used – racaille – was used by former President Nicolas Sarkozy in 2005 to describe violent, multi-racial gangs in suburban housing estates. It has become a code word for the far-right and hard-right in France for all people of African or North African origin.

The far-right attacks on the return of Benzema have been led by a Rassemblement National senator, Stéphane Ravier. He ignored the approaching trial and complained that Benzema was a “paper Frenchman” who regarded himself as an Algerian.

This accusation – common in the “fachosphère” or constellation of francophone far-right web sites – is based on a distortion of comments made by Benzema in 2006. He said that his heart was partly Algerian and partly French but he had chosen to play for France and was “proud” to do so.

There are legitimate questions about the decisions to select Youssoupha’s anthem and to bring Benzema back into the team. Personally, I think the choice of the anthem was  justified but the selection of Benzema was premature.

But the Lepennist attacks distort or ignore the legitimate questions. They are carefully slanted to raise – without seeming to do so – the same identitarian question raised by Le Pen père in 1996. Why is the France football team so full of black and brown people?

The squad in 2021, unlike the 1998 squad, is almost entirely composed of players born in France. One was born in Congo, another in Italy (while his father was playing for Juventus of Turin). Two were born in overseas parts of France. Twenty two were born in Metropolitan France.

Nine are white; fifteen are at least partly of African or French-Caribbean origin; two have North African roots.

It is a miserable truth – which I know from my own experience – that many French people feel uncomfortable with what they regard as an unbalanced racial composition of the squad and the team. By no means all of those people vote for Le Pen.

Equally, many young people in the multi-racial suburbs have a schizophrenic attitude to the French national football team. They celebrate its successes; they like the fact that they can recognise themselves in the squad; but they frequently also support the national team of their country of sometimes distant origin.

The choice of Youssapha’s anthem was meant to address and calm these tensions. The reaction of Le Pen and her minions was an attempt to inflame and exploit them.

Whatever she may say, race is still a core issue and principal political platform for Marine Le Pen.