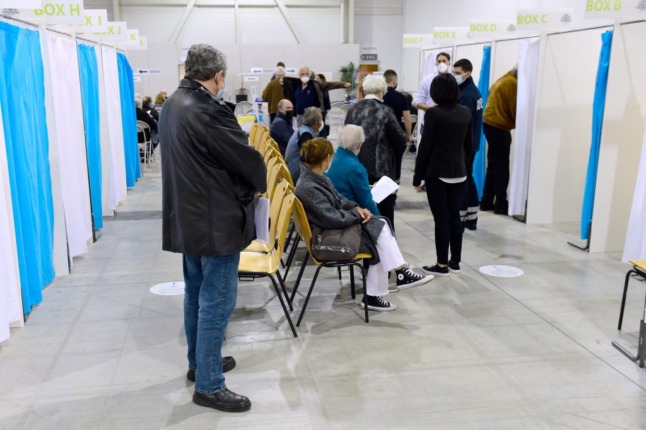 Extra vaccines have been sent to the district where the cluster occurred. Photo: Nicolas Tucat/AFP

A cluster of around 50 people in the Bacalan neighbourhood of Bordeaux in south west France have tested positive for a variant of the virus described as “very rare” by the regional health authority (ARS).

According to local health authorities the cases come from two different “chains of transmission” and affect the Bacalan neighbourhood, plus other districts of Bordeaux and several nearby communes.

It has been dubbed the ‘Bordeaux variant’ by French media.

Is this a new variant?

Not entirely. According to Professor Patrick Dehail, scientific and medical adviser to the Gironde ARS, it is the variant anglais (English variant, known in the UK as the Kent variant) with a mutation.

It has been identified before, but this is the first time it has been recorded as creating such a large cluster.

The variant has been officially designated as a ‘variant of concern’ along with the Indian variant.

Around 80 percent of all cases in France are now of the variant anglais, which is more contagious than the original strain of Covid, but which is not resistant to any of the Covid vaccines currently in use.

Is the Bordeaux variant more dangerous?

The health authorities are naturally cautious, but at present there doesn’t seem to be any evidence that it is any more of a concern than the other strains of the virus.

Many of the people who tested positive are pupils of a local school and their parents and according to Professor Dehail they presented “the usual symptoms, or no symptoms”.

None of the cluster cases have been hospitalised.

Importantly, there is no evidence that vaccines do not work on this strain.

Benoit Elleboode, director of the ARS, told France Info: “Elements indicate that this variant is not resistant to vaccination, since the older people (…) do not seem to have been infected by this variant.”

What is being done to contain it?

Mass screening is already being done in the area to quickly identify anyone who is part of the cluster, and vaccinations will also be stepped up.

An extra 19,000 vaccine doses have been sent to the Bacalan neighbourhood, and vaccines will be open to everyone, one week ahead of the May 31st date when France opens up vaccine appointments to all over 18s.

There are already two vaccine centres nearby, which will get extra doses, and a new centre will be set up in Bacalan on Wednesday. Seventeen local pharmacies will also receive extra doses of the Moderna vaccine and authorities hope to offer vaccines to all of the 8,000 people living in Bacalan.

The school that seems to be at the centre of the outbreak has been closed, but will reopen after a seven-day break.

The discovery of the cluster comes just days after France entered phase two of its reopening plan, which saw café, bar and restaurant terraces reopening for the first time in six months, to general rejoicing, and the curfew move back to 9pm.

Plenty of restrictions remain in place, however, and Bordeaux mayor Pierre Hurmic has called on people not to forget to take precautions.

“This is a warning!” he said, while on a visit to the new testing centre in Bacalan.

“There is euphoria since Wednesday [the date of reopening] and I share it, but we must not let our guard down.”