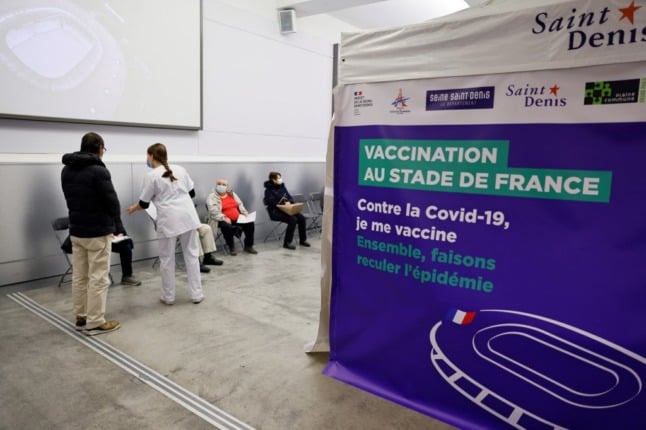 As the French vaccine rollout picks up the pace, vaccine scepticism has fallen. Photo: Thomas Samson/AFP

Polls from early January, as the Covid vaccination drive began, reported just 40 percent of French people saying they intended to get the vaccine, causing a huge headache for politicians since a minimum of 60 percent of the population needs to be vaccinated to gain herd immunity.

But as the vaccine drive picks up the pace – and following an advertising campaign from the government – new polls show the French much more enthusiastic about getting their jab.

I'm not crying at this French vaccination ad, you're crying https://t.co/PVvjas3Y3D

The poll conducted by the centre for political research at Sciences Po university by polling firm Opinion Way, reported 65 percent of people saying they had either been vaccinated or intended to be vaccinated.

❤ this rugby-themed one in the French government's 'please get vaccinated' ad campaign, I too am dreaming of being back in a stadium (watching, with 🍻) https://t.co/LAFo9E5RSq

This broadly correlates with the predictions of France’s health minister Olivier Véran, who on Wednesday said he believed that 80 percent of the population would get the vaccine in the end.

He told radio station LCI: “A few months ago, at best 40 percent of French people wanted to be vaccinated.

“We had counted on 60 percent of the French population by age group. We wanted to go up to 70 percent, we’re going to get 80 percent.

“The French don’t believe without having seen, they have doubts – that’s our collective strength. But they do what they need to do to be protected.”

The below graphics from French journalist Nicolas Berrod show the percentages vaccines in each age group (blue for one dose only, red for fully vaccinated) with the highest percentage in the 75 plus age group, who have been eligible for the vaccine since January.

Even the earliest polls showed France to be more vaccine-hesitant than completely anti-vaccine, with many people saying simply that they hadn’t made up their minds, or they intended to wait and see how the vaccine rollout went and whether people suffered any ill effects.

Back in January, The Local spoke to Antoine Bristielle, a public opinion researcher with the centre-left Jean-Jaurès Foundation, who warned against giving too much weight to the anti-vaxx movement in France.

“There has been a tendency to think that those expressing a reluctance towards the (Covid-19) vaccine are anti-vaxxers and conspiracy theorists who would never accept getting vaccinated,” Bristielle told The Local.

Of the 40-50 percent Covid-19 vaccine sceptics, only 20 percent have decided they will definitely not get the jab.

After a slow and creaking start, France’s vaccine rollout has moved into a high gear in recent weeks, with more than 500,000 people getting vaccinated most days, and France on Thursday recording an all-time record of 672,000 injections given.

The government’s target to have given at least one dose to 20 million people by May 15th was hit, and the next target is 30 million people (around 60 percent of the adult population) by June 15th.

The poll also showed a sharp increase in belief in the vaccine, with 73 percent of those questioned agreeing that “the collective benefit of vaccination is worth getting vaccinated”.

In fact 51 percent of respondents even believe that vaccination should be compulsory for people living in France, compared to 46 percent who are against it. The government has repeatedly said it will not make vaccines compulsory.

The planned ‘health passports’ which will be in use from June 9th will be used only for access to large events such as concerts and not everyday activities such as shopping or going to a café. They also have provision to upload a negative Covid test for those who either cannot be vaccinated or don’t want to be.

According to the survey, a large majority of French people (75 percent) want the vaccination campaign to be accelerated and for vaccines to be open to all age groups. The Prime Minister announced on Thursday that vaccination will be open to all adults from May 31st – two weeks ahead of schedule.

Overall, 55 percent of respondents said it was probable that “our leaders know important things about the Covid-19 epidemic that citizens are not informed about.”

The poll was conducted online between May 3rd and 11th with 1,832 respondents from a representative demographic sample.

The reform is the flagship domestic policy of Macron’s second and final term in office, with the president determined to implement it despite fierce opposition from the political left and unions, but also the wider public.

At the start of the parliamentary debate, Labour Minister Olivier Dussopt struggled to make himself heard above loud booing and shouting.

READ MORE: LATEST: How Paris transport will be hit by Tuesday’s pension strikes

“Our (pensions) system is structurally in deficit… Doing nothing is not an option.”

Speaker Yael Braun-Pivet urged lawmakers to keep quiet, telling them: “We’re not at a protest, we’re in the assembly”.

Macron’s ruling party lost its overall majority in elections last year, even though it remains the largest faction.

His government under Prime Minister Elisabeth Borne wants to pass the legislation with the help of allies on the political right.

The government is also trying to avoid using clause 49.3 of the constitution — an article which allows the automatic adoption of a law without a vote.

Such a move would risk stoking further protests.

Left-wing opponents of the administration filed thousands of amendments ahead of the parliamentary debate beginning.

Walkouts and marches are planned for both Tuesday and Saturday, although unions for rail operator SNCF said they would not call for a strike at the weekend, a holiday getaway date in some regions.

Trains and the Paris metro are again expected to see “severe disruptions” Tuesday according to operators, with around one in five flights at Orly airport south of the capital expected to be cancelled.

“We’re counting on there being rallies so that the country’s elected representatives take into account the opinion of citizens,” Philippe Martinez, leader of the hard-left CGT union, told the France 2 broadcaster on Monday.

Last week’s demonstrations brought out 1.3 million people nationwide, according to a police count, while unions claimed more than 2.5 million attendees.

Either way, it marked the largest protest in France since 2010.

With pressure growing, Borne on Sunday offered a key concession to win support from the conservative Republicans party in parliament.

While the reform will set a new retirement age of 64 for most workers — up from 62 — Borne said people who started work aged 20 or 21 will be allowed to leave work a year earlier.

Calling the offer a “band aid”, the head of the CFDT union Laurent Berger said that the move was not “the response to the huge, geographically and professionally diverse mobilisation” that has swept France.

But Republicans chief Eric Ciotti told newspaper Le Parisien that he would back the reform, potentially securing a majority for the government.

After an attempted 2019 pensions reform that was stymied by the coronavirus crisis, the changes mark another step by reformist Macron in aligning France with its EU neighbours — most of which already have higher retirement ages than the proposed 64 years.

He aims to lift the pensions system out of deficit by 2030 by finding around €18 billion of annual savings — mostly from pushing people to work for longer and abolishing some special retirement schemes.

But while Borne and others have insisted theirs is a fair reform, critics say that women will on average have to wait still longer for retirement than men, as many have interruptions in their careers from childbearing and care responsibilities.

Opponents also say the reform fails to adequately account for people in physically strenuous jobs like builders and doesn’t deal with companies’ reluctance to hire and retain older workers.

Borne said the government would pile pressure on companies to end the practice of letting go of older employees, which leaves many struggling to find work in their final years before pension age.