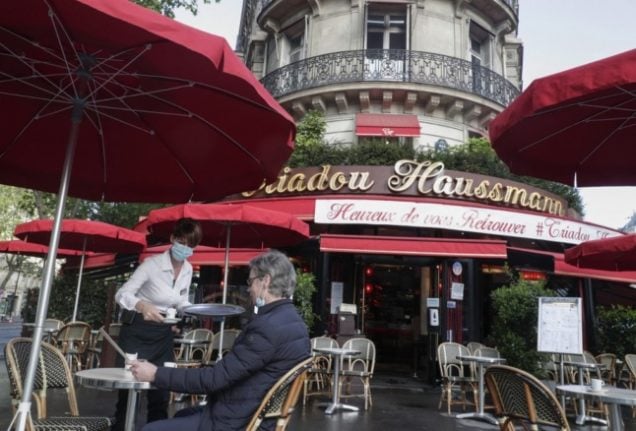 Cafés and restaurants with terraces or rooftop gardens can now offer outdoor dining, under the second phase of a lockdown-lifting plan that should culminate in a full reopening of the economy on June 30th – if the health situation permits.

Museums, cinemas and theatres are also reopening after being closed for more than six months, during which they relied chiefly on state aid to remain afloat.

IN DETAIL France’s calendar for reopening

Across Paris, cafes and restaurants had in the last days prepared for the return by setting out outdoor dining areas and the first customers were already sipping their morning expressos.

The establishments have been closed since October 30, 2020, when France entered its second lockdown to beat the coronavirus.

“I already had three customers come drink their coffees. It feels good,” said Pascal who manages the Saint Jean brasserie in the Montmartre district.

“What a change from getting take-away coffee at the bakery!” enthused one of the customers, Cyril.

Keen to show themselves as ‘men of the people’ French politicians also decamped en masse to café terraces for an early morning coffee, croissant and a photo to tweet.

Nice tweet from the French finance minister, this is totally what daily life in France is like https://t.co/t82SUBo6vV

Two french ministers making the most of reopened cafés with… six croissants. That's the way we do it here. https://t.co/dc2kEDBXZv

Paris is Paris again. Enfin!
French terrace cafes finally open after a 7-month pandemic closure.
No self-respecting politician is currently in an office.

Honestly, though, France needs it

In the western city of Rennes, Patricia Marchand, the manager of the Cafe des Feuilles, said she had reservations even for aperitifs. “It feels good.

“There is a sense of euphoria in the city centre.”

But with the weather service forecasting showers across much of the country – possibly even snow in the Alps – and most venues allowed to use only half of their outdoor seating, some of the 40 percent of French restaurants that boast a terrace are expected to take a rain check on resuming operations

The night-time curfew -albeit pushed back two hours to 9pm – could also put a damper on the revelry, with dining limited to six people per table.

Stephanie Mathey, owner of three Paris bistros, told AFP she was treating this stage of the reopening as a dress rehearsal for the summer.

“Like a diesel engine, we’ll be warming up slowly,” she told AFP.

On June 9th, restaurants will be allowed serve indoors, followed by a further easing of measures on June 30th when the curfew will be fully lifted.

Beyond having a coffee or glass of wine on a terrace, many people are also looking forward to seeing a film in a cinema or catching a play or an exhibition.

“We are glad to be able to welcome you again,” the Louvre museum, the world’s most visited, wrote on its website, where demand was brisk for tickets to a Renaissance sculpture show.

IN DETAIL When do France’s top tourist sites reopen?

In a boost for the economy, non-essential businesses from toys to clothes shops closed since early April when a partial lockdown was ordered, can now reopen with social distancing rules.

The number of coronavirus patients in intensive care had fallen to 4,250 on Monday, down from around 6,000 a month ago.

Meanwhile, the government’s vaccination drive has accelerated, with over 20 million people receiving at least one shot.

Concert halls, stadiums and other cultural venues are allowed to fill 35 percent of their seats, with a limit of 800 people inside and 1,000 outside.

Cinemas, also shut for the last six months have a huge backlog of movies to show and some film buffs were already up and about to get their fix.

“I did not want to be late for the return,” said Cyril, 24, as he headed into a morning screening of the French comedy “Mandibules” saying he planned so see three films in a single day.

Despite the closures, France over the last half year endured less severe lockdowns than its neighbours – notably avoiding major school closures – in what was seen as a major gamble by President Emmanuel Macron.

Health Minister Olivier Véran told BFM television on Monday he expected the rule on wearing masks outside to be lifted “soon”.

The accusations against Damien Abad, which he denies, are a major headache for Macron and his new Prime Minister Elisabeth Borne as they seek to keep political momentum after his April presidential poll victory and ahead of June parliamentary elections.

They also come after several politicians running for parliament stepped down in recent weeks over alleged violence against women.

The appointment of Abad as minister for solidarities and people with disabilities in a reshuffle on Friday was seen as a major coup for Macron, as the 42-year-old had defected from the right wing opposition.

But the next day, the Mediapart news site reported a politics watchdog group created by members of France’s MeToo movement had informed prosecutors as well as Macron’s LREM party of rape claims against Abad by two women in 2010 and 2011.

The government’s new spokeswoman Olivia Gregoire on Monday denied that Macron and his government were aware of the allegations when Abad had been appointed.

One of the women told Mediapart that in 2010 she blacked out after accepting a glass of champagne and woke up in her underwear in pain with Abad in a hotel room, and believes she may have been drugged.

She has not filed an official complaint, but prosecutors are looking into the case following a report filed by the Observatory of Sexist and Sexual Violence in Politics.

The report said she informed the police in 2012 but then declined to formally make a complaint, and her subsequent claim in 2017 was later dismissed by prosecutors.

“I’m relieved that it’s come out, because I knocked on quite a few doors so that someone would do something after the case was dismissed, as I thought it was unfair,” Margaux told AFP on Sunday.

“A lot of people knew but some preferred to look away rather than ask more questions,” she added.

Abad said in a statement he contested “in the strongest way” the allegations, arguing his own disability means he is incapable of sexually assaulting anyone.

The newly appointed minister has arthrogryposis, a rare condition that affects the joints, which he says means sexual relations can only occur with the help of a partner.

The allegations overshadowed the new cabinet’s first meeting on Monday, with Gregoire facing a string of questions on the case.

“The government is with those who, following an assault or harassment, have the immense courage to speak out,” Gregoire told reporters.

She added it is up to the judicial system to establish the truth and that, to her knowledge, “no other procedure against Damien Abad is in the works”.

But politicians on the left called for his immediate resignation.

“If I were prime minister, I would tell Damien Abad: ‘I have no particular reason to believe the women are lying… While we wait for a decision from the judicial system, I wish for you not to be part of the government,'” Socialist Party leader Olivier Faure told France Inter radio.

“We need to send a loud enough message to women, that their voices count,” Rousseau told RTL radio.

Borne, herself only appointed last week in the reshuffle, said on Sunday there could be no impunity for harassment and sexual assault.

“If there is new information, if a new complaint is filed, we will draw all the consequences,” Borne said.

In 2020, Macron’s decision to appoint Gérald Darmanin as interior minister – although he was accused of rape, sexual harassment and abuse of power – drew heavy criticism, even sparking demonstrations.

Darmanin, who kept his job in the reshuffle, has denied any wrongdoing and prosecutors in January asked for the case to be dropped.