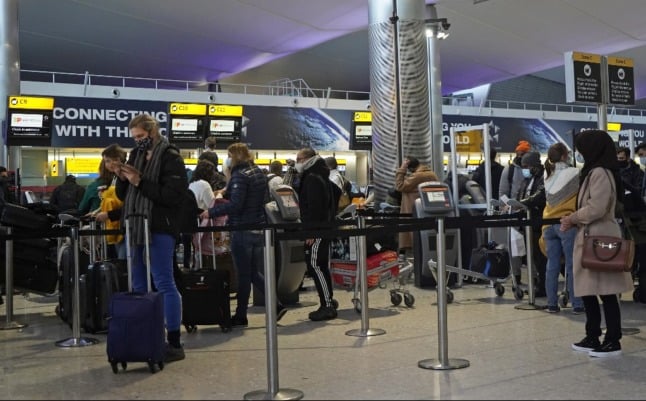 Can Britons travel to "amber" countries in Europe or not? (Photo by Niklas HALLE'N / AFP)

This covers all non-essential travel. Often couched in terms of tourists and holiday-makers, non-essential travel also includes visits by second-home owners and non-emergency visits to family and friends. People with family abroad who haven’t seen them for over a year might feel that their trip is pretty vital, but unfortunately not by the government definition.

Travel for essential reasons including work related motives, medical treatment or compassionate reasons is still allowed on the same terms as before.

The UK government’s rules concern England, so if you are travelling from or to Scotland, Wales or Northern Ireland, check out the rules in place from the devolved governments.

On May 17th, the UK government lifted its ban on all non-essential travel abroad and replaced it with the traffic light system, where countries were awarded a ranking of red, amber or green based on a number of factors including their Covid rates and vaccination coverage.

For green countries travel is now allowed for any reason, but there aren’t many countries on this list and many of them are largely inaccessible (looking at you, South Sandwich islands). Portugal is currently the only European country on the green list.

EXPLAINED: The European countries on the UK’s ‘amber list’ for travel

What about amber countries?

Most of Europe including the nine countries covered by The Local is designated as amber and arrivals into the UK from amber countries (including UK nationals/residents returning from a trip to an amber country) face a host of rules.

At present the rules around testing and quarantine are the same even for fully vaccinated people.

What about this new advice?

“However there may be unavoidable, essential reasons for people to travel to amber list countries.”

However the Environment Secretary George Eustice, then said: “We don’t want to stop travel altogether”.

He told BBC Radio 4’s Today programme: “The reason we have the amber list is there will be reasons why people feel they need to travel – either to visit family or indeed to visit friends.

“They can travel to those countries but they then have to observe quarantine when they return and have two tests after returning.”

“So people can travel to those areas, yes, but they then have to subject themselves to quarantine requirements on their return.”

Asked if this was confusing he said: “Because we want to give people that clarity we are taking things a step at a time.”

Yes, the government is not legally preventing people from travelling abroad, as was the case before May 17th and people are free to ignore the advice, which minister or government spokesman you are listening to.

In the UK travel agencies are still selling holidays to amber list countries including France, Spain and Italy.

However, there is one important consequence of this type of official advice and that relates to insurance.

The UK government’s official travel page states that the Foreign, Commonwealth & Development Office position is “you should not travel to amber list countries” and this official advice will likely invalidate most travel insurance – despite what George Eustice said – so check your policy carefully.

Invalid travel insurance means you won’t be covered for things like cancellation costs but also, potentially more seriously, for health costs in case you become ill or have an accident while you are away.

The EHIC card, or its replacement GHIC, covers only some emergency medical care while travelling and there are many things that it does not cover, including repatriation costs if this is required. People who have travelled abroad against government advice could therefore be faced with a large bill for medical costs if they fall ill or have an accident while abroad.

There are some travel insurance companies that offer policies for travel against government advice (at a hefty price).

The UK government has said it will review the designations every three weeks. If a country makes it onto the green list then travel is allowed and no quarantine is required on arrival in the UK.

Case numbers in most European countries are falling at present but the UK government has not published a definitive guide to the formula it uses to classify countries.

What about Brits living abroad?

The UK government’s advice is around travel from the UK, if you are British and live in another European country there is nothing to stop you travelling to the UK, as long as you follow the rules on testing and quarantine.

You are then free to return to your country of residence.

However, you also need to check your home country’s rules on travel from the UK. Concerns over the Indian variant of Covid currently circling within the UK could lead to countries imposing extra restrictions on arrivals from the UK and Germany has already reclassified the UK as a risk area for this reason.

Your travel insurance situation will depend on which country you bought the policy in, its policy on government travel advice, and the official position of the country that you live in on travel.

France has not been excepted from the travel mayhem, with Flightaware ranking Paris’ Charles de Gaulle third among the most disrupted airports this summer, with 42 percent of flights affected in the six weeks from June to mid July.

The good news is many travellers in France are covered by the strict regulations that the European Union has in place to protect consumers, including those buying plane tickets.

If you have faced issues with your flight, here are your rights and how to get compensation:

In the event your luggage was lost, damaged or delayed

The general advice this summer is to travel with hand baggage only if you can, as many travellers have reported long delays in bags arriving due to a shortage of baggage handling staff.

However if you have checked bags, here’s what to do;

Delayed – You should report delayed baggage (not present when you exit the plane, but delivered later free of charge), immediately to the airline that operated your last flight. You can ask the airline for a refund on any essential items you needed to buy due to the absence of your luggage. Keep the receipt that shows item details.

Lost – If your baggage has not arrived at its destination within 21 days of the date it should have arrived, it is classed as lost. In this scenario, you are entitled to a refund of the bags and contents.

The French government recommends that those travelling by plane examine their airline ticket to see whether their flight falls under the “Montreal Convention” or the “Warsaw Convention.” If your ticket does not say so, you can ask the airline.

Based on the convention your flight falls under, you either have 14 days (Montreal) to send a written request to your airline with purchase invoices for lost goods, or 21 days, as per the Warsaw Convention.

If you do not have proof of loss, you may be offered compensation by weight.

Damaged – If your baggage has been damaged or destroyed during transport, you can ask the carrier to reimburse you for the cost of your bag and the damaged goods.

To do so, you must either write to the company with as much detail as possible about the damaged goods within 3 days (Warsaw convention) of receiving your bag for the Warsaw Convention or 7 days (Montreal convention).

Unless the damage was caused by an inherent defect in the baggage itself, the airline is considered liable. You have the right to compensation up to approximately €1,300.

Finally, if your airline refuses to compensate you or does not respond within at least two months, then you can get in touch with a Tourism and Travel Mediator via this online form.

In the event your flight was delayed or cancelled

First things first: you must figure out if your is trip covered by the EU legislation, then figure out if the delay or cancellation is due to ‘extraordinary circumstances.’

EU air passenger rights apply to you if your flight is within the EU or Schengen zone, if it arrives in the EU/Schengen zone from outside the bloc and is operated by an EU-based airline, or if it departs from the EU/ Schengen zone.

Additionally, the EU rights apply only if you have not already received benefits (including compensation, re-routing, and assistance from the airline) for this journey under the law of a non-EU country.

If your flight is from the UK or US to France then it must be operated by an EU airline to be entitled to these rights.

Cancelled – In case of cancellation, you must check to see whether you have the right to choose between getting your money back, getting the next available flight, or changing the booking completely for a later date.

You are also entitled to assistance free of charge, including refreshments, food, accommodation (if you are rebooked to travel the next day), transport, and communication (two telephone calls, for example). This is regardless of the reasons for cancellation.

Delayed – If your flight was delayed, your rights will depend on the duration of the delay and distance of the flight.

If an airline expects that your flight will be delayed beyond the scheduled departure time, you are entitled to meals and refreshments in proportion to the waiting time. It starts at two hours for shorter flights (distance of 1,500 km or less), three hours or more for longer flights and a delay of four hours for all other flights.

If you arrived at your final destination with a delay of more than three hours, you are entitled to compensation unless the delay was due to extraordinary circumstances.

For a full explanation of the EU rights and how to make a claim, click HERE.