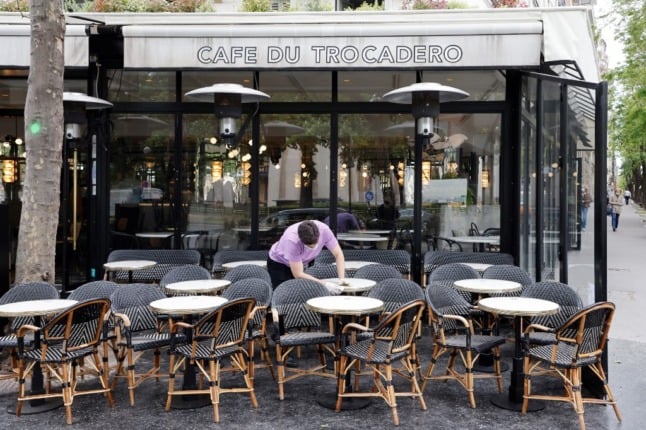 After the end of domestic travel restrictions and the scrapping of the attestation for daytime trips on May 3rd, Wednesday, May 19th marks the second phase of France’s déconfinement (reopening). Here’s what changes

Bars, cafés and restaurants are allowed to reopen their outdoor areas only. This is probably the most exciting change for many people following the complete closure of all eating and drinking establishments (apart from takeout) since October. There will still be rules in place, however, including a maximum of six people per table. Also, unfortunately the weather forecast is pretty bad.

Curfew moves back two hours to 9pm. Anyone out between 9pm and 6am will still need both an essential reason and an attestation.

READ ALSO How France’s curfew will work this summer

All shops can reopen. Shops classed as non-essential have been closed across the country since April 3rd but these can now all reopen, albeit with strict limits on the number of customers allowed per square metre, so expect queues outside popular small stores.

Museums, cinemas, theatres and other cultural spaces are also allowed to reopen, again with strict limits on the number of people allowed per square metre. Most museums and tourist sites are operating on a pre-booked ticket only basis, so check what the rule is before you visit.

Outdoor sporting activities will again be allowed (also on the condition that they respect specific health rules). Sports stadiums can reopen with a limit of 800 spectators in indoor spaces and 1,000 in outdoor venues.

Gatherings of up to 10 people will be allowed in public spaces (up from six currently). There is no actual rule on gatherings in indoor private spaces such as homes, but the guidance is to keep groups limited to six adults.

Spas can also reopen for cures thermales – spa treatments prescribed by a doctor (yes, that is a thing in France and sometimes the State will even pay for it) but not for the general public.

IN DETAIL France’s calendar for reopening after lockdown

And what stays the same:

Indoor gyms remain closed unless you have been prescribed exercise by a doctor.

Working from home continues to be the rule.

Tourists from most non-EU countries (with the exception of the UK, Australia, New Zealand, South Korea, Israel, Japan and Singapore) remain barred.

Mask rules remain in place, making masks compulsory for all indoor public spaces and in the streets in many of France’s larger towns and cities. Failure to wear a mask – covering your nose and mouth – in a designated space can net you a €135 fine.

The ‘health passport‘ allowing vaccinated people to prove their status for travel is not expected to be in use until June, so for the moment even fully-vaccinated travellers have to follow the rules on testing and quarantine.

Question: How many public holidays does France have per year and how does this compare to other countries?

The most commonly-given answer to this question is that France has 11 public holidays per year, ranging from the religious (Ascension and Assumption) to the secular (May Day and commemorations for World War I and II).

There are, however, some caveats to that.

The first is regional – if you live in the three départements that make up the historic region of Alsace-Lorraine you get 13 – the extra ones being St Stephen’s Day (December 26th) and Good Friday (the Friday before Easter).

The reason for this is that the region had been part of Germany and became French again after the end of World War I – but the inhabitants had become used to having the extra holidays when they were part of Germany and showed no interest in giving them up. A compromise was reached.

The second is the year – some holidays (like Easter) change date each year, but others (such as November 11th which marks the end of World War I) stay on the same date each year, and sometimes that date will fall on a weekend.

Some countries change the day of holidays – for example in the UK the Remembrance Day holiday is always on the Monday closest to November 11th – but in France holidays happen when they fall. So if it falls on a weekend the holiday is ‘lost’ in terms of time off – it’s still a public holiday, but workers don’t get any extra days off.

For this reason there are ‘good’ and ‘bad’ holiday years in France – 2023 is a very good year. It also gives rise to the practice of ‘faire le pont‘ – where workers use a single day of their annual leave allowance to ‘bridge’ a holiday – for example if Tuesday is a public holiday they take Monday as a day’s holiday and create a nice four-day weekend.

The Christian festival has a curious history in France, in that it used to be a public holiday and then the government scrapped it and introduced instead ‘solidarity day’, in which workers donated a day’s salary to charity.

Pentecost: The ‘holiday’ where some people work for free

And how does France compare to the rest of Europe?

It’s mid-table – French workers do better than those in Sweden, Norway, Denmark and the UK but worse than those in Spain or Italy. For Germany and Switzerland it depends which region/canton you are in as there are lots of local holidays.

Here’s those French holidays in full, with the days they fall in 2023. French rail services typically offer sales in advance of holiday periods, as well – you can learn more HERE.