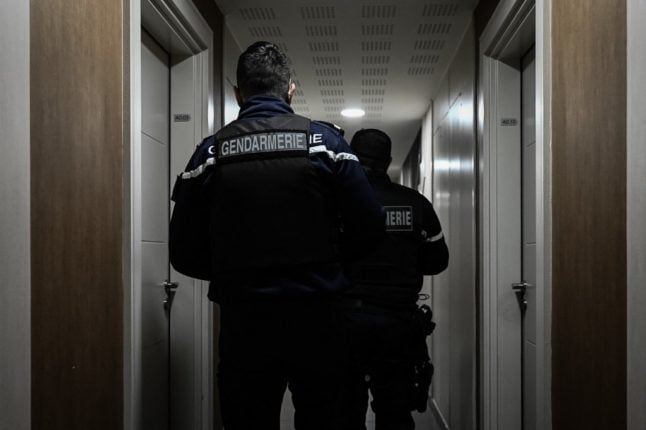 Gendarmes will be knocking on the doors of people subject to France's toughest quarantine measures. Photo: Philippe LOPEZ / AFP

Of the total 2,479 checks conducted across France as per May 6th, 141 people received fines, according to the interior ministry, which confirmed the numbers to French daily Le Parisien.

Some 4,000 people were so far concerned by the quarantine checks, having arrived in France from one of the countries on the ‘red’ list with strict Covid-19 rules.

“The police come to check on me from the other side of the street,” Marcel, 60, told Le Parisien.

“I say hi from the window.”

Marcel had arrived from India, one of the countries on the ‘red’ list. France and several other countries have tightened travel rules on arrivals from India following its flare-up in Covid cases and the new B.1.617 – so-called “Indian” – variant.

At present, travel from the countries on the ‘red’ list is allowed for essential reasons only. This is the general rule for non-EU travel, except for seven countries including the UK, Australia and New Zealand, from which travellers can come for any reason.

Arrivals from countries within the EU do not need to quarantine in France.

Marcel tested positive for the virus at Charles-de-Gaulle airport north of Paris, though, six days later, he remained symptom-free. All international travellers are required to get tested for Covid before departure, but several of the people Le Parisien spoke to took another rapid antigen nasal swab test upon their arrival in France.

EXPLAINED These are France’s rules on quarantine

The government is restructuring its travel rules, preparing a ‘traffic light’ system with red, orange and green lists determining travel restrictions on countries depending on their epidemic status.

During the obligatory 10-day quarantine period, arrivals from red list countries have to stay home at all times, except between 10am and 12 noon when they are allowed to run essential errands.

When announcing the new rules, the government warned that they would be tightly enforced. Anyone found out of the house outside the given two-hour window faces a fine between €1,000 and €1,500.

Another traveller who arrived from India and tested positive upon his arrival said he counted five checks since the beginning of his quarantine.

Two of these happened through intercom only, but most times police seem to request an in-person meet, though from a distance to avoid risking getting infected.

Some police complained that the checks were a waste of resources.

“It would be more effective to isolate these poor people in hotels, rather than letting them infect each other, and less time-consuming for police,” one policeman in the Val-d’Oise département, north of Paris, told Le Parisien.

For the full rules on non-EU travel, click HERE.