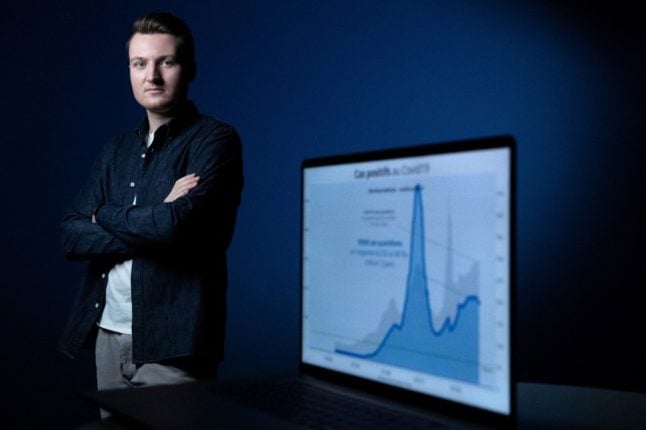 “I would never have imagined all the innovations, the creativity, that have their source in this data,” Rozier told AFP.

When The Local first interviewed Rozier in January, he was fast becoming the go-to source for simple, easy-to-understand graphics explaining the latest on the Covid situation in France.

His Covidtracker.fr site and its siblings, now maintained with the help of an army of volunteers, have become essential reading, earning the praise of President Emmanuel Macron.

But it’s a more recent innovation that has earned him the undying gratitude of thousands – his vaccine appointment-finder site Vite Ma Dose (Quickly, my dose!).

Although the vaccine programme is opening up to more and more groups in France, finding an appointment near you is not always easy.

READ ALSO How to book a Covid vaccine in France

Vite Ma Dose scans all the various platforms offering appointments and presents users with a list of those nearest to them, based on their postcode.

And the site’s Twitter account is an endless stream of satisfied users with one message – Merci Guillaume !

Rozier is also credited with influencing the French government’s decision to open up any unbooked next-day slots to people from all age groups, from Wednesday.

With a hat tip to the brilliant work of @GuillaumeRozier who really should get a Légion d'honneur or a pot of money or something for helping so many people get a vaccine appointment https://t.co/RMLgQ2HPcX

Rozier got the idea to start putting France’s Covid numbers in context in March 2020, while finishing his engineering studies at the Telecom Nancy university in eastern France.

He was focusing in particular on artificial intelligence and the exploitation of Big Data, just as French officials were anxiously watching as coronavirus cases began to overwhelm neighbouring Italy.

To see if French cases were poised to soar as well, Rozier sought out mortality rates and Covid infection numbers compiled by Johns Hopkins university in the United States.

A graph comparing the two rates was unequivocal – despite a lag of a few weeks, France was going to face the same struggle as Italy.

Rozier shared his discoveries with friends and relatives, who began clamouring for daily updates as the pandemic worsened and France went into its first lockdown on March 17th.

So he created a website with charts that updated automatically and posted the link on Twitter, where demand for the virus data went viral.

Baptised Covidtracker, it quickly became a go-to source for the grim tolls on deaths and hospitalisations.

When France began its inoculation drive in January, he added Vaccinetracker, which soon made it clear that the campaign was getting off to a slow start compared with some European neighbours.

But securing official health ministry data wasn’t easy – Rozier warned he would shut down the vaccines site unless the data was made freely available, which officials eventually did.

“All data produced by an administration should be published quickly and thoroughly, and in a format that renders it easily accessible for automation,” he insisted.

As more people became eligible for getting a jab, Rozier rolled out Vite Ma Dose, which on Wednesday will be joined by his latest creation Chronodose.

Chronodose will let any adult search for unfilled vaccination appointments within the next 24 hour period, after Macron announced these would be open to any adult regardless of age or health condition in a bid to ensure no doses go to waste.

“Every day there are still several thousands of vaccination slots still available for the same day or the next,” Rozier said.

“You can imagine everything that data access could see develop, in health care but also the economy, transports, global warming or energy,” he added.

But while keeping on with Covidtracker, Rozier now has a day job – working for an IT consulting firm that is part of the US giant Accenture.