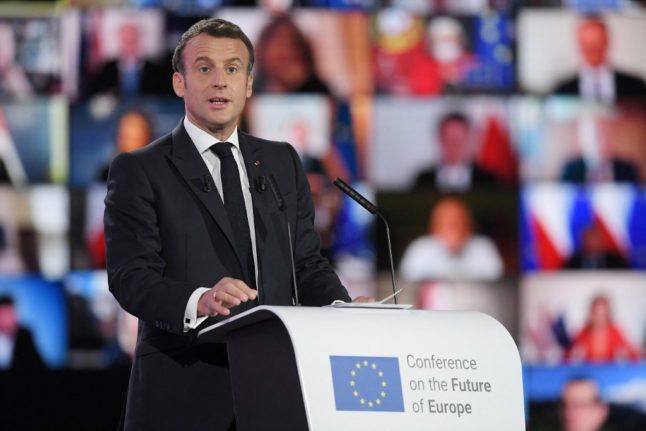 Or could the youngest French leader since Napoleon become just a one-term footnote in history, tripped up by his attempts to straddle France’s left-right divide?

Set to face far-right leader Marine Le Pen in a rematch of the 2017 election final according to polls, 43-year-old Macron already appears to be in campaign mode before formally announcing his re-election bid.

His party said last weekend that it would back the conservative Republicans candidate in southeast France in next month’s regional elections, sparking fears on the right of an attempt to poach their voters.

With the left still in tatters, “he knows that the main threat comes from the right and is therefore doing everything to divide it,” Sliman said.

The ploy was rewarded this week when the mayors of right-wing bastions Nice and Toulon said they would quit the Republicans to join forces with Macron’s Republic on the Move party against Le Pen.

“By setting up Marine Le Pen as his only opponent he is creating the conditions for a far-right victory,” Bertrand accused.

Self-described right-wingers in France rose from 33 percent in 2017 to 38 percent.

French respondents were also stronger advocates of curbs on immigration than the British, Germans or Italians, while a majority considered Islam to be a threat to the French republic.

Although he garnered support from the left against Le Pen in 2017, Macron has since been accused of tacking to the right on immigration after a spate of attacks blamed on radicalised young Muslim immigrants.

READ MORE: Macron – ‘I made mistakes on France’s green transition’

Most shocking was the October 2020 murder of a schoolteacher who showed his pupils cartoons of the Prophet Mohammed.

In the past month Macron has also adopted a tougher line on violent crime, with polls highlighting the issue’s growing importance to voters and suggesting the president is perceived as weak.

After a police officer was killed Wednesday during a drugs bust in the southern city of Avignon, Macron announced plans to boost police numbers and crack down on drug consumption in an interview with the conservative Figaro daily.

“I’m fighting for the right to live in peace,” he said.

“The more Macron tries to break up the right the greater the impression among left-wing voters that he is a right-wing president, the harder it is to ask them to vote for him if he faces off against Marine Le Pen,” Gael Sliman said.

Derided on the left as “president of the rich”, Macron could become enough of a hate figure to give anti-immigration, anti-EU Le Pen a real shot at the Elysée Palace, the left-leaning Jean Jaures think tank warned.

The Covid-19 pandemic, which derailed Macron’s reform drive, has added to the uncertainty.

An Odoxa poll this week showed 64 percent of French people judging harshly his handling of the biggest crisis since World War II — a figure unchanged in the past six months.

While critical of the state’s initially slow vaccination drive, voters approve of the billions of euros spent on supporting the salaries of workers
on furlough and keeping crisis-hit companies afloat.

A senior member of Macron’s party told AFP that “the crisis has made the good of the group the priority.

“If he wants to win next year Emmanuel Macron will have to switch from being the candidate of personal emancipation to a protective president.”