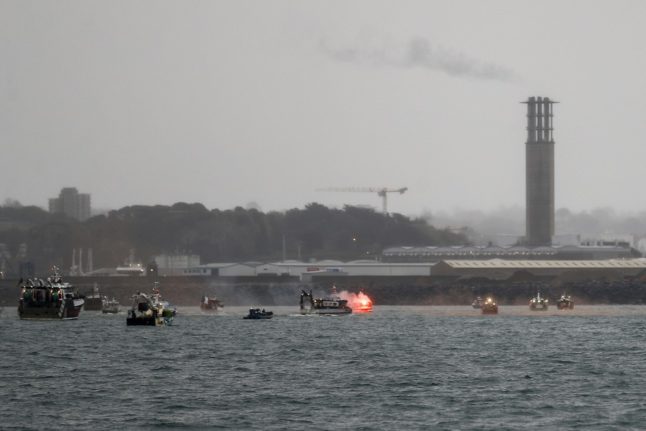 On Thursday between 50 and 70 French fishing boats staged a protest around the harbour of Saint Helier, the capital of the Channel Island of Jersey.

The boats gathered outside the island’s main harbour, in what was described as a blockade.

But Ludovic Lazaro, a French fisherman from Granville, told AFP that “we’re not really blocking. We’re all outside the port.”

But the departure of a cargo ship in Saint Helier was being held up, he said.

“The port captain in Jersey doesn’t want to let the cargo ship out if everyone is around here. He wants everyone to leave,” he said.

Camille Lecureuil, from the port of Carteret, added: “Everyone seems to have decided to stop the cargo ship from leaving. Fishing boats are moving into position at the entrance of the port.

“It’s a peaceful protest. There’s no reason for it to degenerate.”

On Wednesday evening the British government announced that it was sending two Royal Naval vessels to the area to monitor the protest, and on Thursday these were joined by two French police vessels, which had a mission “guaranteeing the safeguarding of human life” in case rescues are necessary, said the Préfet maritime de la zone Manche-Mer du Nord, the local authority which authorised the deployment.

The fishermen began departing from Jersey waters in the early afternoon of Thursday, with Lazaro saying: “Now it’s up to the ministers to work it out. We won’t be able to do much more.”

Why are the fishermen so angry?

The issue is over fishing licences post-Brexit.

Jersey is a British crown dependency, but it’s only 19km off the coast of France and around 250 French boats regularly fish the waters around the island – supporting around 900 families and another 2,000 jobs on shore.

As part of Brexit-related fishing talks it was agreed that French boats which had habitually fished around Jersey would be allowed to continue doing so – but would need new licences.

Because of Jersey’s unusual status – owned by the British Crown but not actually part of the UK – these licences come from Jersey authorities, not the British government in London.

But the fishermen say that when they received their licenses they had new requirements and limitations which were not part of the agreement – with some fishermen licensed to fish for just one or two weeks out of the year.

“These fishing authorisations are inconsistent. Without explanation, the authorisations vary from 7 to 170 fishing days per year per boat,” fishermen told local paper Ouest France on Monday. “A vessel fishing whelk and lobster found itself with a permit only for whelks.”

Jean-Claude La Vaullée has been sailing his boat Cach in Jersey waters for 40 years. “And I’ve been granted… eleven hours of fishing per year. What is that? A tip?” he demanded.

The uncertainty of future access is also a major concern.

How does Jersey respond to this?

Jersey officials have struck a conciliatory tone, talking of “misunderstandings” over the licences and saying that French fishermen can apply for extra licenses or extended fishing hours.

What do the Jersey locals think?

It depends who you ask, French fishermen say the locals are with them and agree that the new conditions are unfair.

Chris Le Masurier, the owner of the Jersey Oyster Company, described conditions placed upon the new post-Brexit fishing licences issued to Breton and Norman fishers as “insulting and discriminatory”.

But Don Thompson, president of the Jersey Fishermen’s Association, told British TV show Good Morning Britain: “The French fishermen out there want conditions removed from their licences so that they can fish with no constraints in our waters, whilst our boats are subject to all sorts of conditions.”

Are the fishermen really that angry?

There’s certainly been lots of angry rhetoric, with Jean-Claude La Vaullée saying that he and other skippers had now equipped their vessels to “re-stage the Battle of Trafalgar”.

But there are between 50 and 70 boats at the protest, which some say is just a protest rather than a blockade – by French protesting standards this is pretty mild.

There is a tradition of robust public protest in France, where strikes are common and frequently involve blockades, rolling road blocks and setting things on fire. In fact, Jersey officials should probably be thankful that no-one has been kidnapped yet.

READ ALSO Why are French workers so find of kidnapping their bosses?

Looked at in context, this protest is probably not something we should over-react to (in case anyone from the UK government is reading this).

Which politicians have stuck their oar in?

Away from the fishermen, tensions have been ratcheted up by politicians on both sides and the fact that Thursday sees local elections happening in the UK may not be a coincidence.

Although the issuing of the licenses is up to Jersey politicians, the UK is responsible for its diplomatic and international relations.

British Prime Minister Boris Johnson is, according to the UK media, personally responsible for the decision to send two gunboats to Jersey.

On the French side, Maritime Minister Annick Girardin escalated tensions on Tuesday by warning that France could cut electricity supplies to Jersey in retaliation.

Europe Minister Clément Beaune accused Britain of being to blame for failing to implement a Brexit deal that came into force on January 1st which should have guaranteed French fishermen the right to continue working in British waters.

“Our wish is not to have tensions, but to have a quick and full application of the deal,” he told AFP.

Meanwhile Jersey’s external affairs minister Ian Gorst said: “We welcome the ongoing support from the prime minister and UK government to achieve a diplomatic solution to this dispute, and we are aware that the UK are sending two offshore patrol vessels as a precautionary measure to monitor the situation in Jersey waters.

“Diplomatic efforts will continue to resolve the outstanding issues relating to fishing licences and to de-escalate the situation, and we will continue to liaise closely with UK and EU officials over the coming hours and days to achieve a pragmatic solution.”