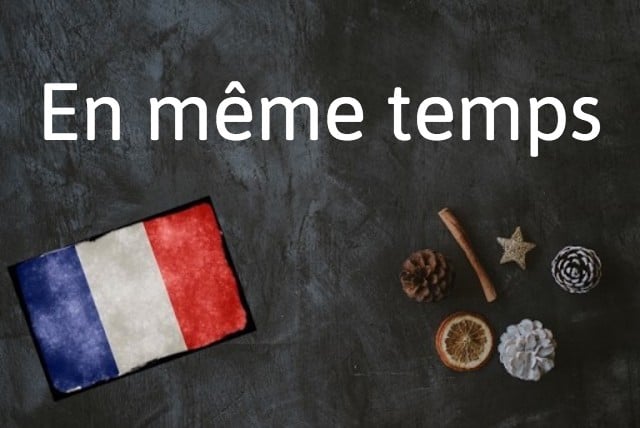 Why do I need to know en même temps?

Because it is French President Emmanuel Macron’s unofficial catchphrase, but it’s also useful for everyday conversation.

En même temps means ‘at the same time’ or ‘at once’.

But it can also be less literal, like saying ‘then again’ or ‘on the other hand’, which can be handy if you’re trying to introduce a sense of balance and even-handedness.

In France, most people associate the expression with their president, Emmanuel Macron for whom it became something of a catchphrase during his presidential campaign in 2017, as he laid out his centrist views.

Macron responded to critics claiming that his political claim to be neither left nor right was proof that he lacked clarity, saying: “I want to confirm to you tonight that I will continue to use ‘en même temps’ in my sentences, but also in my mind.”

To Macron, ‘at the same time’ was about “uniting apparent opposites . . . whose reconciliation is essential for the proper functioning of a society.”

Whether Macron’s attempts at being all things to all voters is a reality or just political fluff remains a topic of recurrent – and sometimes fierce – debate that we won’t go into here, and the linguistic aspects of the expression are luckily less controversial.

Use it to say that you’re doing several things as once, or that you’re adding another point of view: ‘but at the same time..’

Les matins je bois mon café en même temps que je lis le journal. – In the mornings I drink my coffee at the same time as I read the newspaper.

Il faut qu’on puisse faire plusieures choses en même temps. – We need to be able to do several things at the same time.