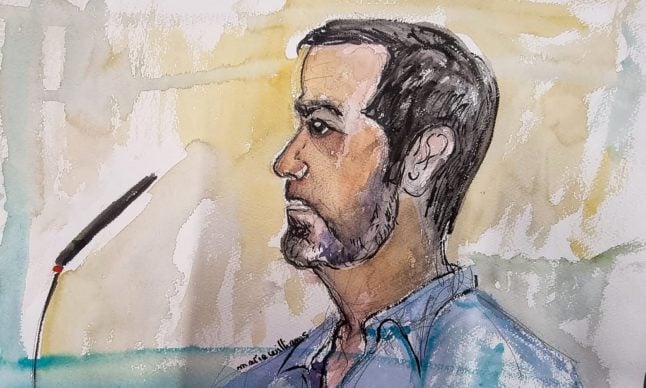 Lelandais, 38, a dog trainer and former soldier in the French army, could face a life sentence following a criminal court hearing in Isère that begins on Monday.

He is accused of kidnapping and killing an 8-year-old girl, Maëlys de Araujo, in August 2017 – a crime that shook France and to which Lelandais has already admitted. He also faces charges of sexually abusing two minors during their sleep.

“You are a dirty monster, a pedophile,” she said.

“That is all he is, a monster. He cannot even be categorised as human. She had all of her life in front of her. He decided to take her life.”

Lelandais kidnapped Maëlys from a wedding in the French Alps in 2017, telling the young girl that he would take her to see his dogs. Her body was found six months later.

The former soldier, who had attended the wedding and returned to it hours after the abduction, was quickly identified as a suspect and, after scientific analysis uncovered traces of blood in the trunk of his car, admitted in 2018: “This poor little girl, I accidentally killed her”.

David Amanou, a lawyer unrelated to the case, explained that a hearing to examine the facts will be held, even though Lelandais has already admitted guilt.

“There is always need for a hearing,” he said. “Often there can be a long delay, sometimes up to ten years, because the French justice system is overloaded.

“The more attention the case gets from the media, the longer this case can go on as there is lots of scrutiny.”

The three-week proceedings will be used by the judge to determine how long Lelandais will be sentenced for.

Lelandais was issued a 20-year sentence last year for the murder of another soldier, Arthur Noyer, in 2017.

Prosecutors suspect that Lelandais may be a serial killer and reopened 900 unsolved criminal investigations and cases of disappearance in 2018 – to no avail. Despite more than three years of inquiries and psychiatric exams that have revealed signs of Lelandais’s “pathological lying,” no evidence has emerged to link Lelandais to other cases.

When sentenced for the killing of Noyer, Lelandais admitted to prosecutors that he had a drug and alcohol problem and that he was sexually attracted to young girls.

At the hearing, Lelandais will face charges of abusing a five and six year old while on vacation in the south of France. He has already confessed to these acts – one of which was shot on his mobile phone.

He is also accused of sexually assaulting a 14-year-old cousin in the north of France. Police continue to investigate whether Lelandais was involved in other crimes.

A verdict from the hearing is expected on February 18th, more than four years on from the murder of Maëlys.