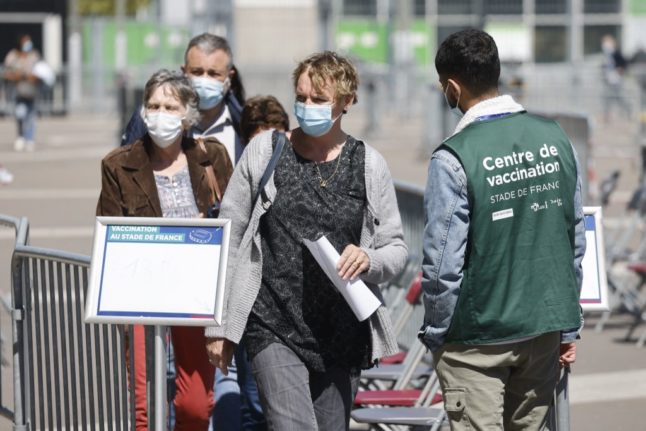 Who can get a vaccine now?

Since its vaccine programme started in late December 2020, France has had a phased rollout of priority groups, based on the risk of developing the most serious forms of Covid-19.

First were the highly vulnerable residents of the Ehpad nursing homes, and their carers, followed by over 75s and those with serious health conditions like cancer or transplant patients, before it was opened up to younger groups and healthcare workers.

Those now eligible are

READ ALSO How to book an appointment for a Covid vaccine

There are also priority appointments for anyone who fits into one of the above groups and works in a listed keyworker profession, which includes teachers, police officers and pâtissiers.

Under 55s who don’t have a medical condition or work in healthcare cannot currently book an appointment slot in most areas.

When will this change?

The current timetable is that vaccines will be opened up to over 50s on May 15th and everyone by ‘mid June’ (there is no definite date yet) but the government is coming under increasing pressure to change that.

On Thursday Emmanuel Macron announced that from May 1st, anyone who is medically obese can access the vaccine.

Reports of up to 270,000 unfilled appointment slots have prompted calls to open up the programme to anyone who wants a vaccine, although some of those ‘vacant’ slots are not quite what they appear.

“We had a first stage where the number of doses was limited, and where it was therefore logical to restrict vaccination to the populations most at risk. But now, we’re in the middle of a cumbersome administrative process that continues.

The health ministry is keen to get the priority groups vaccinated first, since it believes this will have the greatest and most immediate impact on Covid death rates and hospital occupancy, which remains at a high level although it has begun to decrease slightly in recent days.

Health minister Olivier Véran says there are still 4.3 million people who are eligible for the vaccine but have not yet been jabbed, and he is urging those people to make appointments as soon as possible.

Professor Alain Fischer, the man in charge of the vaccine programme, insisted: “Priority must be given to those who need it most, those who are most at risk of illness, hospitalisation or death.”

A ministry spokesman said: “The strategy of opening up vaccination to target groups is national, otherwise it creates massive and undesirable imbalances. There are two flexibilities: if you have serious underlying illnesses, you are eligible from 18 years old, and to fight against wasted doses. This is the exception and not the rule.”

Could there be more exceptions?

Although it seems at present that the government wants to stick to a prioritised programme, there are some exceptions for the under 55s.

Spare doses – vaccine centres which have doses at risk of going to waste have permission to contact people in non-priority groups to use up spare appointments. There is a website called Covid Liste that people can use to register for any appointments going spare in their area, while some GPs with unfilled appointments have been contacting younger patients to invite them to be vaccinated. In some areas GPs and pharmacists are reported to be offering an ‘open to all’ policy, although this is not strictly within the rules. Pharmacies allow patients to sign up for waiting lists.

Regional relaxations – the current rules are the same nationwide, but several local mayors are calling for exceptions to be made due to particular circumstances while other local officials have informally expanded the vaccination criteria.

In Cannes and Nice, vaccinations at ‘vaccinedromes’ have opened up for under 40s, although people in priority groups are always given precedence for appointments.

In Paris mayor Anne Hidalgo is calling for a relaxation of the age criteria and local officials in the Paris suburban département of Seine-Saint-Denis are also pushing hard for changes. The département has the highest Covid rates in the country and a particularly high proportion of keyworkers, but a young population demographic means that many residents are not yet eligible for the vaccine.

Contrary to some reports on social media, however, the département has not opened up vaccination for all, although on Tuesday the giant ‘vaccinedrome’ in Stade de France (in the Seine-Saint-Denis département) opened up appointments to over 45s who live in nearby communes and work in public administration, in order to use up leftover doses.

City mayors say that the national criteria is unfair since cities tend to have a younger demographic than rural areas, leaving a higher proportion of people unvaccinated.

How is take-up in eligible groups?

Polling in December before the vaccine rollout began reported that 60 percent of French people were not definitely planning to get the vaccine, although that figure has fallen in subsequent polls.

In the first groups to become eligible – residents of Ehpad nursing homes – 100 percent of people have now received at least one dose, according to the health minister.

Moving down the age groups, 67 percent of over 70s have had at least one dose.

In the 60-69 age group, who have been eligible since mid April – 41 percent of people have had at least one dose.

Among healthcare workers, who have been eligible since February, 70 percent have had at least one dose, rising to 80 percent in healthworkers over 55.