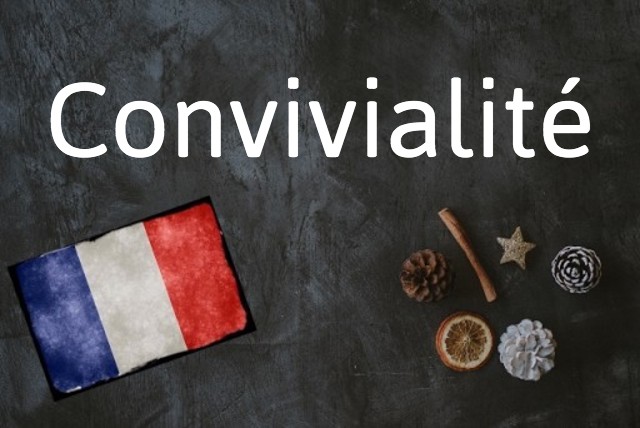 Why do I need to know convivialité?

The notion of convivialité, in addition to playing an important role in French culture, is driving recent conversations surrounding Covid and easing lockdown.

Convivialité, from the Latin convivium (shared meal), is the notion of gathering together in a social way, whether it’s around the coffee machine at work or around the charcuterie board in a bar.

While the concept of conviviality exists in English, it tends to mean light-hearted moments of happiness, while in French you can use to describe any kind of group or social gathering. A recent decree relating to workplace-related health rules has a section on ‘des moments de convivialité‘, by which it meant workers gathering together for coffee breaks or canteen lunches.

The notion of convivialité has a special place in French food culture. When UNESCO inscribed the gastronomic meal of the French onto its Intangible Cultural Heritage of Humanity list in 2010, it wasn’t just simply protecting escargot or boeuf bourguignon. It characterises convivialité as one of the defining points of the French gastronomic meal, emphasising the importance of gathering together and sharing dinner as a cultural practice.

More recently, the notion of convivialité has become prominent in the context of Covid-19, when lockdown measures and regulations have been designed specifically to block people from gathering together. In a recent dispatch on BFM TV, Minister of Labor Élisabeth Borne recognised the solitude that many workers are facing months into télétravail (working from home), emphasising that “we’re missing these moments of convivialité.”

Ce que je déteste le plus pendant le confinement, c’est le manque de convivialité – The thing I hate the most about confinement is the lack of social contact.

Je me suis beaucoup amusé à la soirée, il y avait un véritable esprit de convivialité – I had a lot of fun at the party, there was a really lively atmosphere