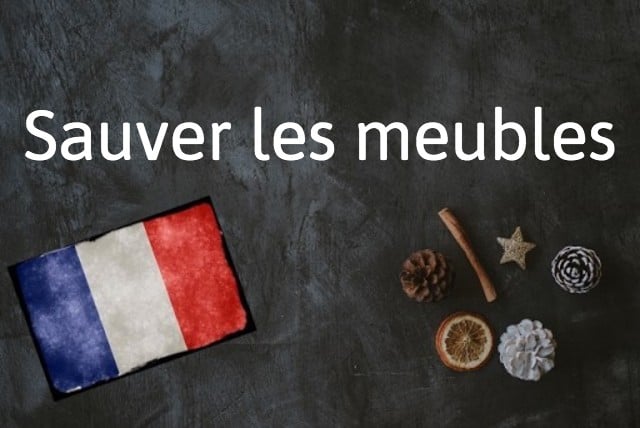 Why to I need to know sauver les meubles?

Because it is a common, figurative expression that is good for times that require a bit of damage control.

Sauver les maubles, which translates as ‘rescue the furniture’ or ‘save the furniture, sounds like something to shout in the event of a house fire (although of course the official advice is to get out as quickly as possible without wasting time on trying to salvage material goods that can be replaced).

However the expression is a metaphor for exactly that. It means ‘limiting the losses in the event of a disaster’, like trying to get your furniture out of a burning house, or during a flood.

It means “preserving the essential” or “limiting the losses,” according to French online dictionary l’Internaute.

The closest English equivalents are probably ‘to save what can be saved’, ‘do damage control’ or ‘salvage what you can’.

Back in the 12th Century, meuble had a wider meaning than just ‘furniture’, defined by l’Internaute as “goods that can be replaced”. So saving the meubles meant trying to salvage anything possible in the event of a crisis.

Today, it is mostly used to say ‘limiting the losses’ of something – anything – that is not going the way hoped.

Ils n’ont plus aucune chance de devenir champions, ils doivent juste sauver les meubles. – It’s clear that they have lost their chance of becoming champions, now they just have to limit their losses.

Après la chute de la bourse on a tenté de sauver les meubles, mais il y avait quand même beaucoup de dégats économiques. – After the fall of the stock market we did damage control, but there was still a lot of economic damage.