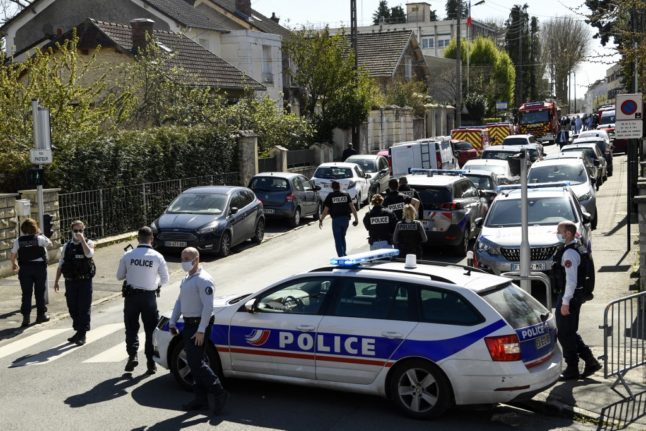 Police at the scene in Rambouillet, Yvelines. Photo: Bertrand Guay/AFP

President Emmanuel Macron said France would never give in to “Islamist terrorism” after the attack in Rambouillet, a tranquil commuter town about 60 kilometres from Paris, which revived the trauma of a spate of deadly attacks last year.

A source close to the inquiry told AFP the attacker shouted “Allahu Akbar” (God is Greatest) during the attack.

Chief anti-terror prosecutor Jean-Francois Ricard, who spoke outside the station along with Prime Minister Jean Castex, confirmed that “comments made by the assailant” indicated a terror motive, without further details.

The attack happened at around 2.30pm in the entrance to the police station in the town of Rambouillet in the Yvelines département.

A man armed with a knife attacked the woman, described as an administrative employee of the police, who later died from her injuries.

The victim, a mother of two, had reportedly gone out into the street to change the parking disc on her car when she was confronted by the attacker.

The attacker, a 36-year-old Tunisian national, also died at the scene after being shot twice by police. He was not known to intelligence services.

“The Rambouillet police station has been hit very hard by these events, and I would like to pay tribute to the police officers who immediately neutralised the perpetrator.

“I want to reiterate to the French people our determination to fight against terrorism in all its forms. “

Castex said that the French republic had lost one of its “everyday heroines”, describing the attack as a “barbaric action of infinite cowardice”.

Local MP Philippe Benassaya described the town as a “peaceful place” and told BFM TV that the community was devastated.

“The employees at this small police station, known for its tranquillity, are devastated,” said a local police source.