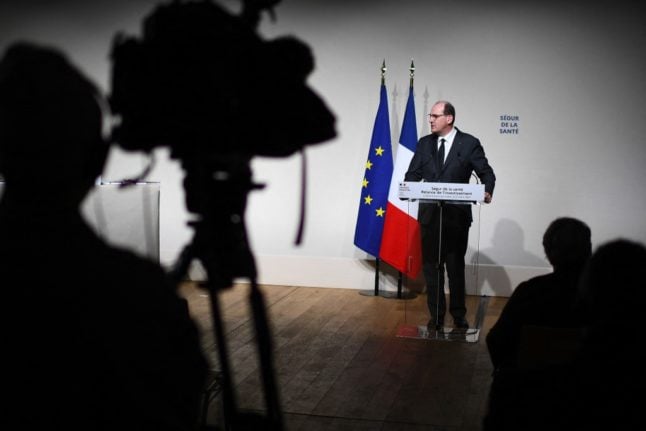 The prime minister was set to be accompanied by Interior Minister Gérald Darmanin, Health Minister Olivier Véran and Education Minister Jean-Michel Blanquer for a live broadcast at 6pm, which we will follow HERE.

President Emmanuel Macron was intending to stick to a goal of allowing restaurants to serve patrons outdoors from mid-May, while reopening cinemas, theatres and museums with reduced capacity, a government source told AFP.

While the president was expected to announce the full plan himself in another live speech to the nation before the end of April, the government ministers were going to present some details, notably on the return to school that begin next week.

France also plans to lift restrictions on trips of more than 10km from May 3rd, the government spokesman confirmed on Wednesday, amid reports that the 7pm curfew will also be relaxed on this date.

Non-essential shops will also reopen in mid-May, it is reported, while sources said that the 7pm curfew would be relaxed – although not necessarily scrapped altogether – from May 3rd.

France has been on ‘partial lockdown’ since April 3rd to contain a third wave of coronavirus infections that have again pushed hospitals to the brink.

Non-essentials shops were closed and travel was limit to within 10km of home, with essential reasons and an attestation permission form required for longer trips.

Schools also closed for three weeks – two weeks of which were rescheduled Easter holidays – with primary schools returning as planned on April 26th and secondary and high schools having a second week of distance learning before returning ti in-person classes on May 3rd.

The staggered plan to exit a four-week clampdown, sketched out by Macron in his televised address last month, “remains the working basis,” government spokesman Gabriel Attal said during a press conference on Wednesday after a meeting of the Defence Council, which decides on health restrictions.

Attal confirmed that attestations justifying journeys of more than 10km would no longer be necessary from May 2nd.

Case numbers appear to have peaked in recent days and reached a plateau, although pressure on hospitals remains high.

The prospect of reopening reflects the government’s conviction that the number of daily Covid cases will fall to around 20,000 within a month, the source said.

Macron is also betting that France will meet its target of vaccinating 20 million people with at least one dose by mid-May, up from 13 million currently.

“It appears that we could be at the peak, or close to it,” Attal said, while cautioning that progress in reducing pressure on hospitals “remains insufficient.”

Macron drew fire from political opponents as well as health experts early this year when he decided against a new lockdown, bucking a European trend.

He defended the move by saying France and its economy had gained “precious weeks of liberty,” but surging cases forced his hand in April, though he stopped short of ordering people to stay home or avoid socialising completely.