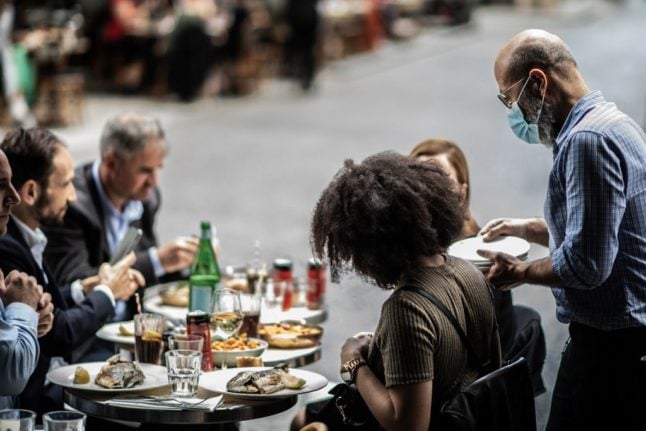 Last summer, Parisians could enjoy meals outside on the capital's many terraces as the government eased lockdown. Photo: Martin BUREAU / AFP

“If all goes well,” said Health Minister Olivier Véran on April 1st, “the epidemic peak should arrive in around seven to 10 days.” Add another two weeks, he continued, and the number of patients in hospital intensive care wards should begin to decrease too.

So has his prediction come true as France approaches the two-week mark for the nationwide ‘partial lockdown’?

France last week reported around 40,000 new Covid-cases each day on a weekly average, down by 5.6 percent from one Friday to the next, according to French data scientist Guillaume Rozier, founder of the CovidTracker website.

The latest weekly average, 32,900 cases per day, was muddied by the holiday on Monday, which meant fewer people got tested.

But even when correcting for the holiday drop by replacing it with an average Monday tally (45,000), the curve of new Covid cases turned out to be flattening out, according to Rozier.

The map below, also created by Rozier’s website CovidTracker, shows how the general drop in cases is reflected in a local decline in spread, with the exception of a few areas where cases keep rising (the ones coloured red).

“The curve of exponential growth has been broken across the French mainland,” epidemiologist Antoine Flahault, who heads the Geneva Institute for Global Health, told The Local.

“It’s difficult to talk about a peak,” Flahault said, explaining that “peak” implied a rapid decline rather than a gradual descent as seen in France currently.

“Right now we are at a plateau,” he said. “Hopefully the descent will be steeper next week.”

Looking at the areas that imposed restrictions on March 20th, the descent seems to be picking up its pace, as shown in the graphics below.

This first one shows the weekly average of daily new Covid cases in the greater Paris region Île-de-France from July 1st until April 11th. This one shows the same, but for Hauts-de-France. Back in autumn, Macron outlined 5,000 daily Covid-cases as the threshold below which restaurants, bars, cafés and other closed sectors could reopen. He has avoided bringing that number back up again, but he hasn’t revoked it either.

Flahault said France’s Covid case numbers late next week would be a “good indicator” for when the country could reach that goal if it kept the current measures (school closures, ban on most domestic travel and closures of most sectors).

France’s hospitals have seen their situation go from bad to worse over the past months, struggling to cope with a high number of Covid patients that has strained intensive care wards to above 100 percent capacity on a national level, forcing them to postpone many non-Covid treatments.

In the greater Paris region Île-de-France, hospital chiefs said back in March that they would soon have to do patient triage, deciding who to treat, although since then extra beds have been added.

Since then, the number of patients admitted into the Paris region’s intensive care wards has continued to rise, reaching a level of 1,784 patients on Monday – 57 percent more than at the peak of the second wave, according to French journalist Nicolas Berrod, who daily crunches Covid numbers on his Twitter account.

“The peak is not behind us,” Maxime Gignon, epidemiologist at a hospital in Amiens, northern France, told France 3 on Wednesday.

Amiens is in Hauts-de-France, which alongside the Paris region has been among the hardest hit areas during the third wave of the virus.

“We are not in a resting mode at all,” Gignon said, explaining that the hospital struggled to treat the rising number of patients and that they had to transfer patients to the city of Beauvais, some 60 kilometres further south.

The map below, created by French daily Le Parisien, shows which areas have had to increase their intensive care ward capacity the most in 2021 compared to last year, due to the rising number of Covid patients.

But on Wednesday the number of intensive care patients in France dropped for the first time since January.

However, when looking closely at the graphics showing the intensive care patient numbers in Île-de-France, the growth rate seems to be slowing down: What does that mean?

“The measures are working, but the third wave isn’t behind us,” said government spokesman Gabriel Attal on Wednesday.

Speaking to journalists following a government meeting, Attal said the “signs are encouraging,” but cautioned against celebrating prematurely.

“It is still too early to see the full effectiveness of the measures at a national level,” he said.”

In a recent twist, France now also increasingly worries about the spread of the Covid variant first discovered in Brazil across its territory, which lead to the French government suspending all flights between France and Brazil earlier this week.

What about the vaccine?

The government hopes the vaccination campaign, which has sped up in the past weeks, can help to quickly curb the spread, allowing to reopen as planned in spring.

READ ALSO: Shops, bars, cinemas: What will be France’s timetable for reopening?

France now injects around 350,000 doses per day, which means that the set goal of 20 million total doses by mid-May is feasible, if the current rate continues and there are no further problems or suspensions.

But a lot can still go wrong between now and then.

And the United States’ pausing of the Johnson & Johnson vaccination following the discovery of blood clots has worried France too, where the AstraZeneca injection saw a fall in popularity since several countries, including France, temporarily suspended it back in March following similar findings.

While cleared for use by the European Medicines Agency (EMA), French media have reported a mounting scepticism towards AstraZeneca among the population, with some declaring they want the Pfizer BioNTech dose “or nothing”.

“We are confronted with reiterated refusals,” Etienne Moulin, a doctor in Tarn, southern France, told France 3. “Saying that there’s aren’t any [sceptics] is burying your head into the sand.”

However, currently the demand for the vaccines far outweighs any scepticism, and more than half a million people have signed up to get alerted for leftover doses in their area, according to the Covidliste initiative created to counter vaccine dose waste.