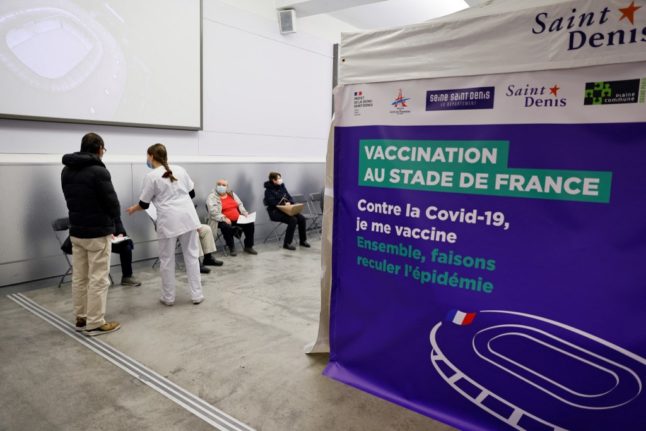 The opening of giant 'vaccinedromes' including at the Stade de France has helped France speed up its vaccine rollout. Photo: Thomas Samson/AFP

Previously those aged between 55 and 74 were only entitled to a vaccine if they had a health conditions such as diabetes or hypertension, or a BMI of 30 or above.

However Health Minister Olivier Véran announced on Sunday in the Journal du Dimanche that from Monday, April 12th all over 55s could book their vaccine appointment, an acceleration of the original schedule.

He told the newspaper: “From Monday, everyone in France who is over 55, without health conditions, can receive the vaccine. We are enlarging the vaccine programme!”

He added that he was not worried about reports of resistance to the AstraZeneca vaccine in France, pointing out that on Friday 157,000 people in France had received an AstraZeneca jab and overall polling now shows that 70 percent of French people are planning to be vaccinated, up from just 40 percent in polls conducted in January.

Monday also marks the first deliveries to France of the Johnson & Johnson vaccine, which only requires one dose to be effective. The first delivery of 200,000 doses, arriving one week earlier than planned, will be distributed to pharmacies and GPs to administer.

If you are in an eligible group you can book your appointment directly, there is no need to wait to receive an invitation from your GP or local health authority. Vaccine appointments can be booked online or through apps, by phone or directly via local pharmacies.

There are also two new online online platforms dedicated to helping people secure appointments – Vite Ma Dose ! (Quickly My Dose!) which is for people who are eligible to get the jab but are struggling to find appointment slots near them and Covid Liste which allows people who are not yet eligible to sign up for alerts for any unfilled appointments or spare doses in their area.

The vaccine programme in France, after getting off to a sluggish start, has accelerated markedly in recent weeks with the arrival of extra doses and the opening of ‘vaccinedromes’ including at the Stade de France in Paris.

Last week France hit its 10 million target one week early and the next target is to have 20 million people vaccinated with at least one dose by mid May.

Under the current schedule, vaccines will be opened up to under 55s who have no underlying medical conditions in mid June.

In the interview, Véran also announced that from Monday the first home-testing kits will be available to buy from pharmacies.