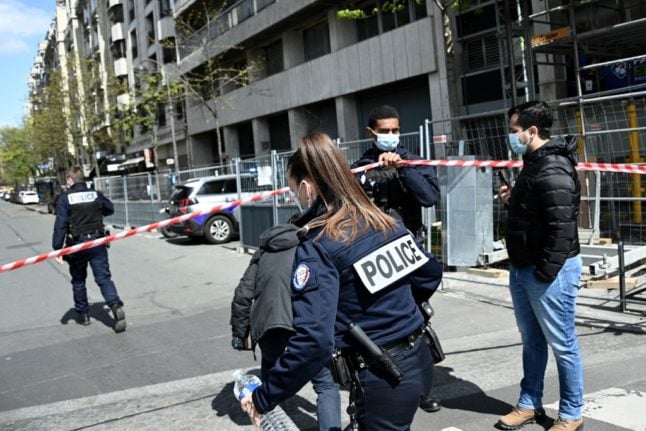 Police have sealed off the area around the Henry Dunant hospital in Paris. Photo: Anne-Christine Poujoulat/AFP

The incident happened at around 1.40pm on Monday at the Henry Dunant private hospital owned by the Red Cross in the upmarket 16th district of the capital.

The two victims were taken into the hospital for treatment. One, a man, died of his injuries while a woman who worked as a hospital security guard is receiving care for serious injuries.

Officials have ruled out a terrorist motive, with witness statement appearing to point to a targeted attack on the man.

The perpetrator fled the scene on a scooter.

The hospital is a private facility specialising in geriatric care but is currently, like most hospitals in Paris, also running a Covid-19 vaccine centre.

Francis Szpiner, mayor of the 16th arrondiseement, told BFMTV: “We really think it was a settling of scores, it’s not an attack on the vaccination centre.

“It would seem that the security guard was hit by a stray bullet,” he said, adding that the attacker had fired several rounds at the man.

Several French media had also quoted police sources saying they were exploring a private disagreement or settling of scores as the motive for the attack.

“I heard six loud shots while I was having lunch around 1.30 pm,” the caretaker of a nearby building told AFP.

“I went out immediately, and I saw a young black man on the ground, face down, outside the hospital. He was maybe 20 or 30 years old and he was already dead,” said the caretaker, who declined to give her name.

The owner of a restaurant across the street from the hospital told the BFMTV television channel that he also heard shots ringing out.

“I turned around and I saw a guy with a hoodie firing. Then I saw him approach a guy lying on the ground and put two bullets in his head to finish him off,” he said.

“The shooter walked off with amazing calmness, as if nothing had happened,” he said.