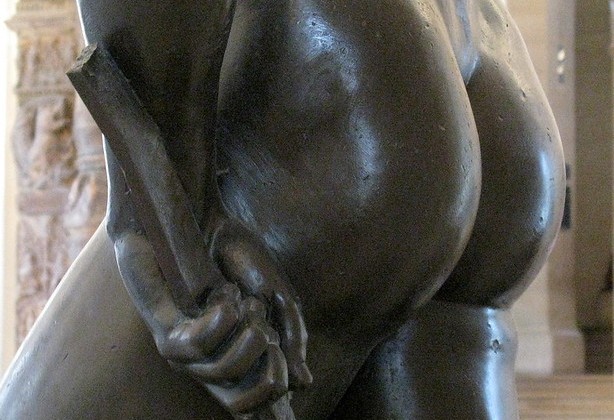 There are many ways to talk about the human behind in France. From loaf to firecracker, the French language has a long list of alternatives to the more common fesses (buttocks) or cul (arse).

However, cul also features in several common expressions that have nothing to do with human anatomy.

You won’t learn these in school – some of them are pretty coarse – but they do play an important role in le français populaire (common French).

Here’s a look at some of the most common ones.

The sister expressions avoir du bol or avoir du pot both mean ‘to be lucky’ and both refer to the ‘anus’, according to French online dictionary l’Internaute. (Bol and pot are slang words for ‘anus’.)

So there’s no doubt about it, avoir du cul in French is something you want.

Now here’s a golden one for nights of wine and gossip. Une histoire de cul translates as ‘a story of arse’, which it is too – kind of. It is a ‘dirty story’, which means there’s often elaborate sexual details involved. It’s very colloquial, so save it for close friends.

If you’re telling une histoire de cul, you might want to talk about your plan cul (ass plan).

Plan cul is a more crude version of un coup d’un soir (a one-night stand) or the old school (and poetic) une aventure sans lendemain (an adventure without a tomorrow).

It’s possible to have a plan cul régulier, which is French for ‘friend with benefits’ or ‘fuck-buddy’.

There’s a very sweet 2-minute French series explaining that better than we can here:

Faux-cul translates as ‘fake-arse’, which is what French people call someone who is a ‘hypocrite’ or a ‘phoney’.

Faux-cul originally referred to the actual fake behinds women used to put under their dresses to dramatically enhance their silhouette, known in English as a bustle.

Mon cul in France means ‘sure’ or ‘right’, but dripping with sarcasm, the same way English uses ‘yeah, my arse’. If you say mon cul, you’re really saying: “I don’t believe a single word of what you just said.”

It’s pretty vulgar, never use it in front of your French in-laws.

The full expression is actually mon cul, c’est du poulet, which means ‘my arse, it’s a chicken’. (read more about how it came about here.)

Now, what you really don’t want to be in French is a lèche-cul.

This is a very strange expression. Comme cul et chemise directly translates as ‘like ass and shirt’, but it means that two things are similar or fit perfectly together.

It is the French version of the English expression ‘like two peas in a pod’:

On sait tous que ces deux-là sont comme cul et chemise. – We all know that those two are like two peas in a pod.

Faire cul sec directly translates as ‘to do dry bottom’. Here the bottom refers to the bottom of your glass, while sec (dry) is what it will be once you’ve downed your drink.

Faire cul sec is the French version of ‘downing’ or ‘chugging’ a drink – emptying the glass in one go. Another version is boire cul sec – to drink dry bottom.

This is a great expression for all of those interested in French politics.

This is an expression often used about politicians whose reputation is plagued by scandals, which will follow them whenever they make public appearances. It’s roughly the equivalent of ‘having skeletons in the closet’.

To make it less inelegant, commentators sometimes shorten it to just avoir des casseroles, though the cul is of course implied.

Cul dans les ronces translates to ‘arse in the brambles’. It sounds like a pretty unpleasant experience, and it is.

You really don’t want your cul dans les ronces, because, depending on the context, it means something along the lines us ‘the danger isn’t over’, that ‘there’s still work left to do’, or that you’re ‘not done yet’.

It’s similar to ‘not out of the woods yet’ in English. In other words, the work isn’t done, it’s not over yet.

Another thing you don’t want is to l’avoir dans le cul – to have it in the arse. L’Internaute describes this as a “vulgar expression” that originated in the 20th century as an alternative to être baisé – to be fucked.

READ ALSO: What’s the worst possible insult you can use in French?

An alternative is l’avoir dans l’os, ‘to have it in the bone’, which sounds less vulgar, but refers to the same thing. While we don’t necessarily recommend you use either of these two French expressions, it’s always good to know what people are talking about.

Avoir le cul entre deux chaises translates as ‘to have one’s arse between two chairs’. It describes that situation when you’re ‘caught in the middle’ or ‘stuck on the fence’. It’s not a good place to be. If you’re not careful, you might just fall through the gap between the two chairs and land flat on your cul.

If you were torn between going to your friend’s birthday or a work dinner, you could say j’ai le cul entre deux chaises.

Next up, cul-de-sac, which directly translates to bottom-of-the-bag, but you rarely hear it used about an actual purse or backpack.

Generally French people use cul-de-sac to describe a ‘blind alley’ or ‘dead end’, the cul here being the ‘end’ – either literally (a closed street) or metaphorically (a dead end task).