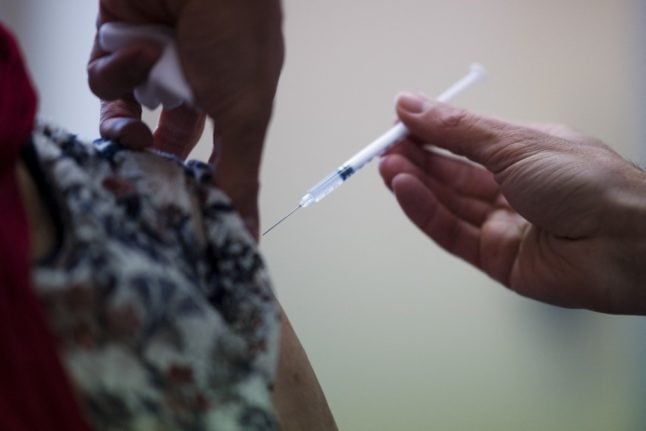 Prime Minister Jean Castex announced on Thursday afternoon that the 10 million target – set for mid April – had been reached.

“The pace has picked up for good,” added French government spokesman Gabriel Attal.

He was speaking just after the weekly Defence Council meeting, where President Emmanuel Macron and a selection of ministers discuss which measures, if any, to take to stem the spread of Covid-19.

The government has taken plenty of criticism for France’s slow start in the vaccination programme, but the rollout has sped up significantly over the past few weeks.

On Wednesday, the total number of injections – first and second doses combined – neared 400,000. A total of 9,797,957 people had received at least one dose since the scheme started.

Overall 3,362,472 people have received both doses and are therefore fully vaccinated.

Almost 400,000 vaccinations in France today. Overall, they are now only 200,000 short of the target of 10m first injections by 15 April. Barring earthquakes they should exceed the target tomorrow, 7 days early. https://t.co/OY38fHPV4o

In order to vaccinate the entire adult population (52 million people) by August, as the government has said it hopes to do, the daily number of injections needs to reach an average of 576,266, according to the Vaccine Tracker website.

EXPLAINED: How to sign up for spare Covid vaccine doses in France

On March 4th, Prime Minister Jean Castex said the government’s target was to vaccinate 10 million people by mid April, 20 million by mid May and 30 million before the summer.

“The vaccine is our direct path to liberty,” Attal said.

The scheme would accelerate further in the coming weeks, he said, with the arrival of new doses and the recent opening of some 30 mass-vaccination centres spread out across the mainland.

READ ALSO When will you be eligible for the Covid vaccine in France?

This week there will be no government announcement, as it is too early days for the new rules to have had an effect.

However “the measures seem to be working,” Attal said, referring to “encouraging early signs” from the 16 areas that imposed the partial lockdown in mid March.

But, “the virus continues to spread quickly,” he added, saying the situation remained highly worrisome in the country’s strained hospitals.

On Wednesday, hospital intensive care units counted 5,746 Covid-patients in total, up 102 from the day before.

Attal said the total intensive care capacity had risen to 8,000 beds and would reach 10,000 if necessary, by postponing and rescheduling non-Covid procedures. The hospital community have previously warned that this comes at the cost of other patients.