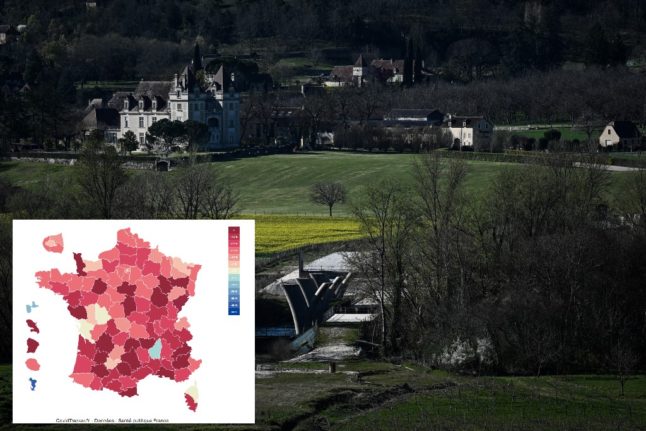 Photo: Philippe LOPEZ / AFP / Covid Tracker
French President Emmanuel Macron’s decision to extend the partial lockdown to the entire country, announced in a live broadcast on Wednesday, was prompted in part by a rapid rise of Covid-19 rates across the whole of France, not just in big cities like Paris.
Whilst the greater Paris region of Île-de-France and northern France remain the hardest hit areas with the highest pressure on hospitals, case rates are rising the fastest in less populated places (see map below) of rural France.
Largely spared during the first and second waves in 2020, départements such as Gers, Haute-Loire and Dordogne are now seeing a spike in Covid case rates.
In one week, their incidence rates – the number of daily cases per 100,000 inhabitants recorded on average over a seven day-period increased by between 63 and 87 percent, according to Covid Tracker.
In seven days the infection rate in the southern département of Gers shot up by 87percent, in Haute-Loire the increase was 81 percent and in Dordogne the infection rate rose by 63 percent.
In comparison, Paris’ incidence rates increased by 0.95 percent over the same period.
While hard-hit areas like the capital still have much higher incidence rates – Paris has 531 compared to Gers’ 163 – rural areas have low immunity levels because they were less hit last spring and autumn.
The départements where cases are rising the fastest:
The list below shows the name of the département and how much their Covid case numbers increased in the past week. The number in brackets is their overall incidence rate.
For example, in Gers, the first département on the list, the incidence rate is only 163, which is low compared the national average (379) and minimal when looking at the département of Seine-Saint-Denis, to the north and east of Paris, where the rate is 779.
However, Gers’ incidence rate skyrocketed by 87 percent in just one week, compared to a 9 percent increase in Seine-Saint-Denis.
Gers +87.36% (163)
Haute-Loire +81.53% (285)
Pyrénées-Orientales +72.44% (269)
Hautes-Alpes +68.09% (432)
Dordogne +63.73% (316)
Côte d’Or +61.87% (225)
Vosges +61.83% (301)
Cher +54.59% (303)
Haute-Marne +51.71% (311)
Cantal +51.49% (153)
Doubs +47.65% (409)
Lot-et-Garonne +47.33% (193)
Loiret +44.28% (290)
Sarthe +42.13% (334)
Vendé +41.85% (261)
Alpes-de-Haute-Provence +41.69% (435)
Manche +40.85% (200)
Bouches-du-Rhône +40.76% (480)
Aveyron +40.41% (271)
Tarn +40.31% (275)
This map shows how case numbers changed in different parts of France in one week, from March 24th to 31st.
The darker the red, the higher the increase. For an interactive version of this map you can visit Covid Tracker.
The map below, also from Covid Tracker shows a slightly different perspective. It reveals the overall incidence rates of départements around France, revealing how the Paris region, the north and the south east and the hardest hit.