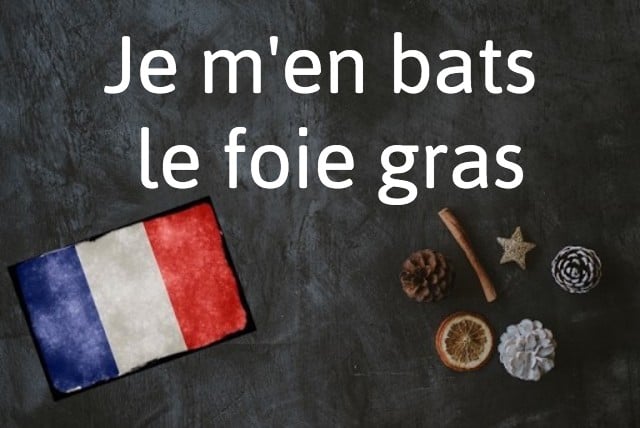 Why do I need to know je m’en bats le foie gras?

Because it’s a richly historic phrase but also one still in regular use that sums up a very French mood.

Literally translated, it means “I beat my foie gras” which sounds both pointless and a waste of lunch. But its real meaning sums up a particularly French tradition – defiance of the government, rules or in general people trying to tell you what to do.

Its use ranges from people out on demos to teenagers shouting at their parents that they have no intention of abiding by borderline-fascist expectations of tidying their room or doing their homework.

It’s not just a simple “I don’t want to” it’s a full expression of rage and defiance, more like “you can take your rule and stick it where the sun don’t shine”.

And its origin is a fittingly rebellious time – the French revolution – but maybe not in the way you would expect.

Once the monarchy was overthrown and the Revolutionaries in government, lots of major changes to everyday life were imposed – and not just relating to the height of certain aristocrats.

The revolutionaries brought in a new calendar, renamed the months of the year, made speaking French compulsory (many areas of France still spoke in local dialects) and attempted to ban the production of foie gras.

Perhaps surprisingly for a man whose lasting reputation is for chopping off heads left, right and centre, Robespierre was also a keen animal rights activist who regarded the production methods of foie gras as unspeakably cruel, leading him to ban the practice in 1793.

This went down extraordinarily badly in south west France, which remains to this day a leading producer of foie gras. Local farmers staged protests – some of which degenerated into riots – in which they waved blocks of illegal foie gras in defiance at government soldiers.

After Robespierre was overthrown and executed in 1794 the ban was quietly dropped and the phrase to “beat your foie gras at someone” moved into the language.

*Well done to the readers who spotted this reference to the poisson d’avril (April fish) otherwise known as an April Fool.
That’s right, beating your foie gras is not a real French phrase and if Robespierre did have any views on animal rights history has failed to record them.
If you want a similar but real phrase you could try je m’en bats les couilles – I beat my balls with that, which is a (vulgar) way to say that you just don’t care.