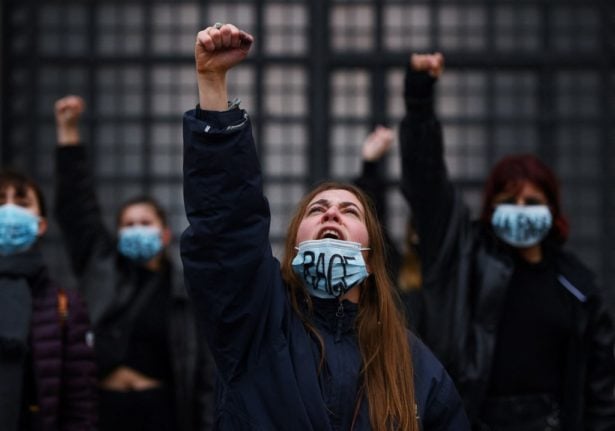 Women in France have been taking to the streets to protest sexual harassment and assault repeatedly in the years since the #Balancetonporc hashtag sparked a mass-movement in France. Photo: Christophe ARCHAMBAULT / AFP

In September 2019 she was ordered to pay €15,000 in damages to Brion, whom she accused on Twitter of making sexually lewd remarks at a party.

The trial court ruled she had provided no proof of her claims of sexual harassment.

Brion had admitted to making inappropriate remarks but claimed he had later apologised in a text message. His lawyers argued that the remarks did not constitute harassment which under French law must involve repeated or “serious” pressure. But the Paris Court of Appeal overturned the verdict on Wednesday, ruling that “even if Eric Brion suffered by being the first man denounced under #balancetonporc, Sandra Muller should be recognised as having acted in good faith.”

Muller’s lawyer Jade Dousselon hailed the verdict as a “historic” win for victims of sexual harassment and a “huge relief” for her client.

READ ALSO: ‘This time there will be change’: Has France’s Me Too moment finally arrived?

Muller made the claim against Brion on October 13th, 2017, at the height of the #MeToo movement, which began in the US over the rape and abuse allegations against film mogul Harvey Weinstein.

She launched the hashtag #balancetonporc as a call for French women to name and shame abusers and then shared her own account in a later tweet.

She accused Brion of humiliating her at a function in the city of Cannes in 2012, telling her: “You have big breasts. You are my type of woman. I will make you orgasm all night.”

Brion, the former head of TV channel Equidia, acknowledged making inappropriate remarks but said he had apologised by text message the day after.

But he argued that Muller’s post wrongly portrayed him as a sex offender and that the publicity around the incident had ruined his career.

“It was a heavy come-on, it was ugly but that does not mean he deserves to be pilloried with the title of workplace sex harasser,” his lawyer Nicolas Benoit had argued.

Muller, who denies having received an apology from Brion at the time, slammed her initial conviction as sending a message that women should “shut up” about sexual harassment and abuse.

She also revealed that her own career had also suffered from being associated with #balancetonporc but said she had no regrets about speaking out.