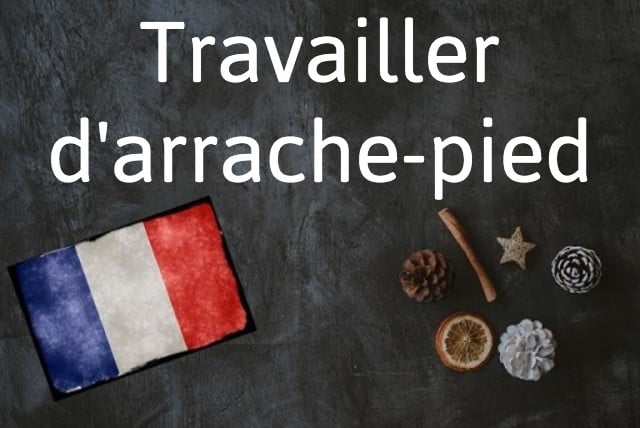 Why do I need to know travailler d’arrache-pied?

Because it is useful for times when you want to let people know how hard you are working on something.

The verb travailler means ‘to work’; arracher, also a verb, means to ‘snatch’, ‘rip off’ or ‘tear off’; and pied is French for ‘foot’.

Travailler d’arrache-pied directly translates as ‘to work of snatch-foot’, or ‘working so hard that you (figuratively) tear your foot off’.

This is not however about snatching your foot off your own body. French online dictionary l’Internaute specifies that the expression originated as a metaphor for “taking off”, in other words working so hard that you defy gravity and your feet lift off the ground.

Travailler d’arrache pied is something you do when you’re working intensely on something, putting a lot of effort into solving a particular task.

Lately it has appeared multiple times in French media coverage of the situation in the country’s hospitals, where health staff are said to be working d’arrache-pied to take care of the high number of new Covid patients.

French politicians often use this expression when they want to emphasise that they are doing everything they can to get something done. The current government has used it about the Covid-19 vaccination scheme, which came off to a slow start before speeding up.

French media reported that UK Prime Minister Boris Johnson had vowed to strive “d’arrache pied” to find a bilateral accord with each of the European Union’s 27 member states to let artists travel between the UK and the bloc without a visa (no such agreement has been forthcoming so far).

Johnson, who spoke in English, used the term “flat out”, which is a good English equivalent. It all depends on the context.

On a travaillé d’arrache-pied tout le week-end pour préparer le mariage. – We worked flat out all weekend to prepare for the wedding.