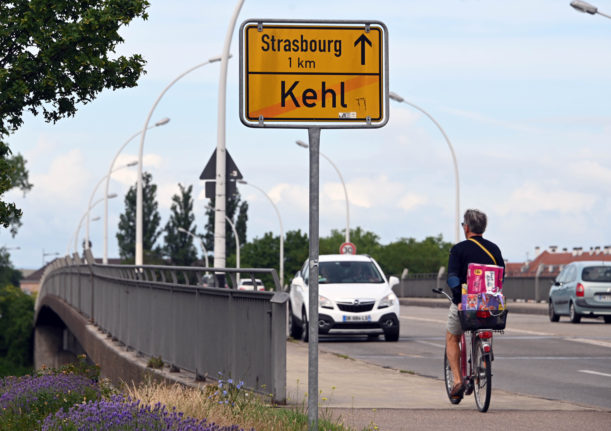 A cyclist crosses the French border in summer 2020. Photo: DPA

France, including all French overseas departments, are now considered “at particularly high risk of infection due to a particularly high number of cases”, Germany’s Robert Koch Institute for infectious diseases said.

Slovakia and the Czech Republic were meanwhile downgraded from the highest alert red list of “virus variants regions” to “high risk” areas.

French Foreign Minister Jean Yves Le Drian confirmed on Friday that a Covid test would be required at the border. Quarantine would not be obligatory for arrivals from France but it would be advised, he added.

The new measures came into force on Sunday – from then on, French travellers will have to show a negative Covid-19 test, taken no more than 48 hours before arriving in Germany.

“The explosion of the pandemic in Germany is quicker than they thought so they are going to reinforce saliva testing at the entry points to Germany,” Le Drian added.

He added that the tightened controls would cause problems for cross-border workers.

Covid-19 incidence rates, which measure the number of infections in every 100,000 people over the previous seven days, have crossed the threshold of 200 in numerous French regions.

In Ile-de-France, the area that encompasses the capital of Paris, the number has passed 600.

“While we see such a high incidence, it is simply a necessity… a practically automatic process,” Chancellor Merkel told a press conference in Berlin on Thursday as part of an EU summit, focused on the fight against Covid-19.

“It is not related to a political decision here but when we see the evolution of the incidence rate – as is the case here – exceed the threshold of 200 for a long time, that requires a classification as a zone of high risk,” she added.

Up until now, only France’s border area of Moselle had been classified by Germany as a high-risk zone.

The classification imposes several travel restrictions. As well as the requirement to obtain a negative test result before entering German territory, travellers need to observe 10 days’ quarantine and there are strict border controls too.

Berlin has also placed Austria’s Tyrol state and the Czech Republic in the same category. But Merkel hinted on Thursday that France could enjoy special treatment and avoid strict border controls, despite being classified as a high-risk area.

“There is a whole specific test procedure… that is in discussion with France,” she said.

The French secretary of state for European Affairs, Clement Beaune, “is negotiating the easing of terms… to avoid the border being closed”, AFP learned on Thursday from his entourage in Paris.