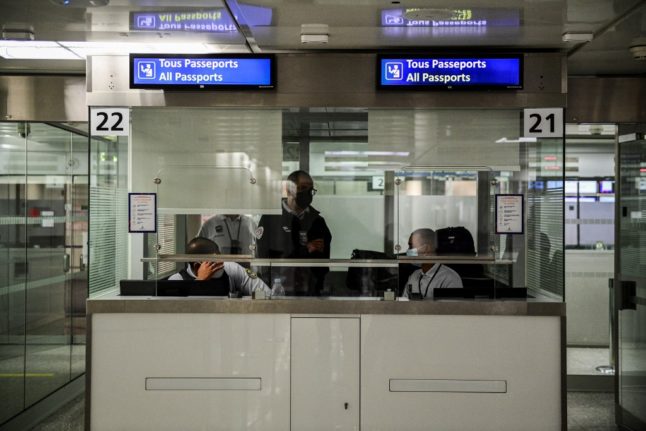 Quicker passport control is just one fof the advantages of having an EU passport. Photo: Martin Bureau/AFP

If you are living in France and manage to get French citizenship then your rights are the same as a born-and-bred Frenchman or Frenchwoman.

But what about people who have citizenship of another EU country – which includes many Brits who took Irish citizenship after the Brexit referendum – in order to keep their status as EU citizens?

Here’s a quick guide to the advantages:

This is the big one, having the passport of an EU or Schengen zone country means you have the right to move to any of the 27 EU members states and live, work, retire and generally settle there.

It doesn’t necessarily exempt you from getting a residency permit – most countries, with the exception of France, require foreign nationals to register after a certain length of time, but you are spared the complicated process of visas and fulfilling criteria including income requirements that is the lot of non-EU nationals.

While non-EU nationals can of course get residency in an EU country this only covers that country, if they want to move to another EU nation they have to start again from scratch with the residency process. Residency also has other limitations including a limit on the amount of time you can spend outside the country and the need to regularly renew it.

In most EU airports, ports and stations the EU queue is considerably shorter than the “other passports” queue and checks are limited to a quick passport scan, rather than the cumbersome checking of other travel documents like visas or stamping process that non-EU nationals face.

It’s not guaranteed though, you can still be unlucky and face an airport with only one working passport gate for all arrivals.

If you don’t want to move to the EU but just want to spend a significant amount of time there, having an EU passport will save you from nervously counting down 90 days.

Non-EU nationals from some countries, including India, need a visa for all trips but many others – including the UK, the USA, Canada and New Zealand – benefit from visa-free stays of 90 days in every 180. You need to be careful to keep an accurate count of days though, and for British second-home owners the days of spending long summers in France have been curtailed by the post-Brexit application of the 90-day rule.

READ ALSO How does the 90-day rule work in France?

Stays for EU passport holders aren’t totally unlimited, however, as after a certain amount of time you will be considered a resident for tax purposes.

France doesn’t require EU citizens to get a residency permit after three months as many other EU nations do, so it’s traditionally been a little easier for people to stay for long periods, but keep an eye on your tax status.

As well as being able to move to another country, you also have the right to bring a partner or spouse with you, or other family members.

If your partner or spouse is from a non-EU country, such as the UK, they don’t get to avoid the process for visas and residency. However, they are entitled to apply to a spouse visa, which doesn’t rely on them securing a job or being able to fulfil certain financial requirements, as many other visa types do.

EU citizens benefit from the EHIC – a mutual health insurance scheme that sees EU member states cover the health costs of visitors from other EU countries.

This is intended for holidaymakers and short stays so doesn’t cover everything – it’s really for unexpected or emergency health treatment while you are away from home and it also doesn’t cover the cost of repatriation so people are always advised to take out travel insurance as well.

If you’re living and working in one EU country and then move to another to work, your pension contributions in both countries will be assessed and paid out together when you come to retire. You apply to the pension system of the country where you are living when you retire and they calculate your pension based on your contribution in every EU country where you have worked.

It basically saves you the colossal hassle of claiming multiple pensions in different countries.

Different countries have different rules on this, but don’t assume that you will get to vote in your new home even if you are an EU citizen. In most places you will be able to vote in European elections while many countries also allow you to vote at a local level for town councils, regional authorities etc. However in most EU countries voting in national or presidential elections is reserved for citizens of that country.

In France EU citizens can vote at a European and local level and can also stand for office in local elections, but presidential elections are only for French citizens. If you want to become the president of France you do of course need to be French but you don’t need to have been born a French citizen.

Hopefully this won’t be a long-term issue, but the pandemic has lead numerous countries in Europe to either close their borders completely or severely limit travel over the past year.

In this case, possession of an EU passport has given holders no extra rights as countries have largely based their rules on where people are travelling from, not what passport they hold.

In most cases the citizens of that country are allowed in, and people who have their permanent residence there are allowed back, but for other EU passport holders it has been essential travel only for much of the year.

There has also been much freer travel inside the EU than from outside as the Bloc closed its external borders in March 2020 and is yet to reopen them.

Even for people who are allowed to travel under their country’s border rules, requirements such as testing and quarantine are in place for everyone and make no distinction between passports.

The upcoming ‘vaccine passports’ may prove to be the most valuable document in the months ahead, but no European country has so far implemented them.

While this might sound obvious, it’s important that you use your EU passport to travel if you want to benefit from EU benefits at the border.