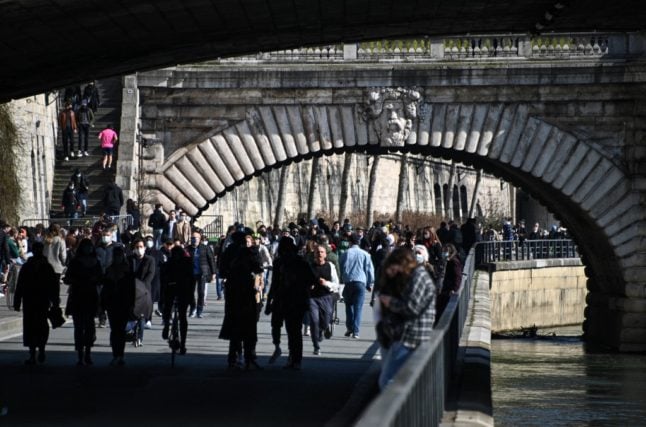 Parisians flocked to the Seine riverbanks on Saturday, March 20th, the first day of the lockdown 'light' in France. Photo by Anne-Christine POUJOULAT / AFP

Interior Minister Gérald Darmanin wants to put an end to scenes of large outdoor gatherings, and has told regional authorities to reinforce policing, according to a document seen by French media.

He has asked that “public gatherings of more than six people are subject to strict fines”. The crackdown is for the whole country and not just those areas recently placed under a new ‘lockdown light’.

France banned gatherings of more than six people in public during the second lockdown in October, but few are familiar with the rule and police rarely enforce it.

This will now change, as the interior minister in his note asked for reinforced policing of parks, gardens and riverbanks to prevent scenes as seen in Paris during the first weekend of the new restrictions, when scores of people gathered by the Seine to enjoy the sunny weather.

Breaking the rule could be punishable with a €135 fine, rising to €3,750 and six months in jail for repeat offenders.

The government has also asked that people living in areas free from lockdown measures limit their private gatherings to six people, but this is a guideline, not a rule.

MAP: Is your French département at risk of being placed under ‘lockdown light’?

In the 16 départements on lockdown, the government has asked that everyone stops inviting people from outside their household to their homes. Instead they should meet up with friends or extended family outside in public in small groups.

For full details on the Covid-19 rules and guidelines, click HERE.

This comes as Covid-19 rates continue to soar, with three additional départements set to be added to the list of areas currently on the new lockdown.

Health Minister Olivier Véran will hold a press conference on Thursday at 6pm to lay out the latest health situation. He is not expected to announce new measures for the 16 départements currently on tighter measures.

Despite cases rising among schools, leading to classes being sent home, the government has insisted closing them is still a last resort.