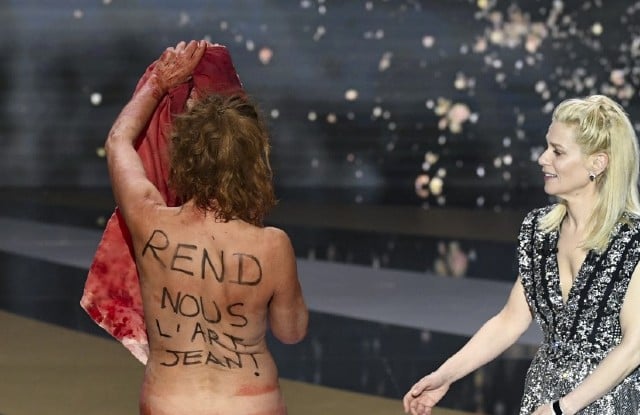 This year’s César movie awards, the French equivalent of the Oscars, took an unexpected turn when actress Corinne Masiero stepped onstage dressed in a blood-stained donkey’s costume, tampons dangling from her ears, and stripped naked.

“No culture, no future” read the scarlet letters written on the 57-year-old’s chest and stomach in an unequivocal denunciation of the government’s Covid-19 policies, which saw theatres, concert halls and cinemas close down over three months ago.

Her back was a personal address to Prime Minister Jean Castex: “Rends-nous l’art, Jean” (give us back the arts, Jean), a phrase with a phonetic spelling equal to rends-nous l’argent (give us our money back).

"No culture, no future."

It was an audacious performance that made headlines both at home and abroad, but it was hardly new in France.

For years, protesters in France have used nudity as a tool to capture the public’s attention on a wide range of issues. Women’s right activists, environmental groups, animal rights activists, local councillors and cyclists are just some of the groups that have stripped naked to make a point.

Last year, dentists across France published nude pictures of themselves alongside the hashtag dentistes à poil (naked dentists), to decry the lack of protective equipment during the pandemic.

Could it be as simple as standing out from the crowds, since protests in France are hardly a rarity?

“Nudity still shocks in France,” historian Sylvain Boulouque told The Local. “If you protest naked, you’re certain that the media will talk about you.”

France is a country with a firmly ingrained protest culture and street demonstrations are – in non-pandemic times – rife.

In the capital alone there are some 2,000 protests every year, according to the local police, which keeps count of the declared protests (not all protests are). In 2019 they counted 2,093 protests in Paris, down from 2,444 the year before and 2,974 a decade earlier, back in 2009.

With several protests taking place each week, activists need to stand out to capture the country’s attention. An environmental activist faces a riot policeman clearing a protest camp on a building site on September 9th, 2014 near Gaillac, in the Tarn region. Photo: REMY GABALDA / AFP

Boulouque specialises in the study of far-left movements and is the author of several books, one of which zoomed in on the ‘yellow vest’ protests that shook France in 2018 and 2019.

The ‘yellow vests’ movement was unique in its ability to rally the masses, gathering up to 1.5 million protesters across the country at the most, according to police estimates,  but most protests draw much smaller numbers.

“When you don’t have the numbers, nudity is a way of provoking public opinion,” said Boulouque. A woman protests topless at the International Day for the Elimination of Violence against Women in Bogota, Colombia on November 25th, 2020. Photo: DANIEL MUNOZ / AFP

Is it really just a French thing?

While it is quite widespread in France, the French are far from the only ones who strip off in order to make a point, with protests from Nigeria to Brazil to the UK using nakedness.

“(The protesters) are extremely varied,” Claude Guillaume, author of I chant the critical body: political usages of the body (2008), told Europe 1 in 2014. “We cannot reduce them, neither to a socio-professional category, nor to a region of the world.”

Sometimes the nudity is both a tool to draw attention to a cause and part of the cause itself.

The World Naked Bike Ride, which cycled through a French city for the first time last autumn after years of lobbying for permission, is an international movement that in France is organised by the French Naturist Movement, which lobbies for the general right to be naked in public. But nudity is also a way of showing vulnerability towards the “other”.

“Nakedness symbolises weakness in relation to someone who is much stronger than you,” Boulouque said. “When cyclists demonstrate naked, they are naked in relation to the cars.”

“When you care about nature, it’s better to be naked, you show your fragility,” one French cyclist participating in the naked ride told RFI in Rennes, western France, last year. The Ukrainian women’s rights groups Femen pioneered naked protests as a media strategy in France, but have been criticised for promoting a white-washed and model-like image of women’s bodies. Here they call on Muslim women to fight Sharia laws in Paris on March 31st, 2012. Photo: Kenzo TRIBOUILLARD / AFP

When did it begin in France?

While naked protesting already existed in France since at least the 1960s, it was the arrival of the Ukrainian women’s right’s group Femen in 2012 that “democratised the practice”, said Jallal Mesbah, a PhD student at the University of Angers who wrote his thesis on the group.

“Feminist groups use their bodies because they are aware of its sexualisation through the media,” Mesbah told The Local.

Infamous for its provocative protests against prostitution in Ukraine, Femen used the same strategies to make headlines in French media. By now, the topless images of women with placards in front of the Eiffel Tower and other symbolic places have become almost commonplace in France.

“The body becomes a tool. The more they use their bodies, the more they remove the stigma around them,” Mesbah said. A policeman detains a Polish protester with “fuck you” written on a chest. Photo: François DEVOS / AFP

However, critics say naked protests can reinforce stereotypes and stigma of women’s bodies, especially when it comes to Femen.

“In Femen’s media coverage, the nudity shown – and therefore considered “respectable” – is limited to certain bodies,” Marion Dalibert, a researcher at the University of Lille, told The Local.

The women present in the photos, are “the youngest, thinnest activists who meet current beauty standards,” she explained. “This nudity has been defined in the media as a symbol of female empowerment, but only for white women.” But is it effective?

When Masiero undressed at the César Awards, she knew that her naked 57-year-old body would shock her audience – it was what she intended it to do.

“If it bothers people, they have to ask themselves: why does it bother you?” the actress told French news website Mediapart.

“That a girl of my age doesn’t give a damn about being naked . . . with sagging butt cheeks and cellulite . . . unshaved, nothing at all. Oh my god!” she declared sarcastically.

Since Masiero’s protest, struggling artists have received renewed attention by French media, several of whom have paid a visit to one of the around 60 theatres currently occupied by protesters.

However, historian Sylvain Boulouque said the protest itself was unlikely to make the government reopen cultural establishments or bump up economic support to struggling artists.

“What we know makes protests impactful today, is either numbers or violence,” he said.

Still, the actress gave the artistic community renewed faith that individual action can spur a debate, which Mesbah said might pave the way for change further down the road.

“It’s important to not shut ourselves into a mentality of results, where the only question is ‘did she succeed or not’. There are results that we don’t see,” he said. “I think we can read it as one happening among several that can provoke change in the long run.”

“Controversy in itself is a way of changing things.”