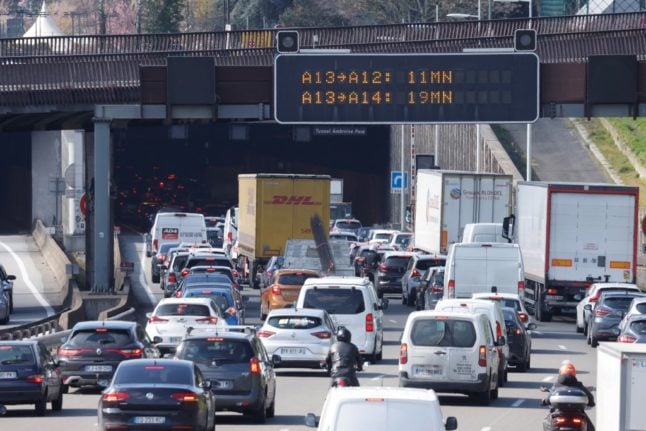 Traffic on the Paris ringroad leading to A13 highway in the direction of the west of France. Photo: Ludovic MARIN / AFP

The new restrictions, announced by Prime Minister Jean Castex late on Thursday, apply to around a third of the country’s population (around 21 million) affecting Paris and several other regions in the north and south.

The government has insisted that the new month-long lockdown will be less strict than the two imposed last year, with schools open and outdoor exercise allowed for an unlimited amount of time.

EXPLAINED: These are the rules in the areas of France back in lockdown

But the new curbs, to begin at midnight on Friday encouraged many to leave the notoriously cramped city for areas free from the restrictions, such as Brittany, the southwest Atlantic coast and Lyon in the southeast.

The high number of drivers headed out of Paris on Friday afternoon caused 396 kilometres of traffic jams, according to the public Sytadin traffic site, which said the level was “exceptional for this time”. A spokesperson for national rail operator SNCF told AFP that trains for the destinations unaffected by the lockdown measures were now fully booked after having a 60-70 percent level of occupancy on previous Fridays.

Trains leaving Montparnasse station in Paris – which serves destinations in Brittany and the southwest – were completely full after a rush of bookings late Thursday.

President Emmanuel Macron even insisted Friday that the word “lockdown” (confinement in French) was not appropriate to describe the government’s strategy.

“What we want is to put a brake on the virus without shutting ourselves in. This is not being locked down,” he said at a meeting at the Elysee Palace.

“Strictly speaking, the term lockdown is not right. What we are talking about are supplementary braking measures,” he said.

Maiwenn, a 19-year old student clutching a giant suitcase, said she had decided to leave Paris to spend the rest of the university year with her family in Saint-Brieuc in Brittany.

“I’m going to stay there until the end of the term,” scheduled for mid-April, she said. “It’s been roughly a year that our courses have been on distance learning so we’re starting to get used to it.”

MAP: These are the 16 parts of France under new lockdown The other regions affected by the new measures notably include the Hauts-de-France region of northeast France which covers the city of Lille, and the Alpes-Maritimes on the Mediterranean, as well as Seine-Maritime and the Eure in the north.

Health Minister Olivier Véran expressed hope that this regional lockdown would be the last, with the situation helped by the onset spring and the vaccination campaign.

According to a poll by Odoxa for Le Figaro and France Info just 56 percent of residents in the areas affected plan to abide by the new lockdown rules.