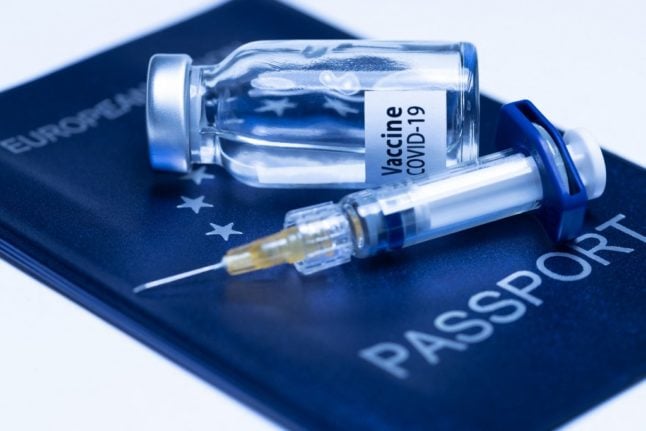 A picture taken on March 3, 2021 in Paris shows a vaccine vial reading "Covid-19 vaccine" and a syringe on an European passport. (Photo by JOEL SAGET / AFP)

But with patchy vaccine access around the world and mounting concerns over data privacy, questions are swirling about how the measures will work in practice.

EU has a plan

The European Union unveiled a plan Wednesday to set up a travel certificate to help restore freedom of movement within the bloc for citizens inoculated against the coronavirus.

“With this digital certificate we aim to help member states reinstate the freedom of movement in a safe, responsible and trusted manner,” European Commission president Ursula von der Leyen said.

It will show “whether the person has either been vaccinated, or has a recent negative test, or has recovered from Covid, and thus has antibodies.”

‘It’s not a vaccine passport’

The plan may however face stiff resistance from many members states, particularly over fears of discrimination against those still waiting for a vaccine.

According to EU commission spokesman Eric Mamer, “We don’t call it a vaccine passport we call it a green digital certificate.”

“It is a document that will describe the medical situation of the individuals who hold this certificate.”

READ ALSO: How are European countries comparing in the battle against Covid ‘third wave’? There’s an app for that?

Many programmes under development are geared towards facilitating travel and come in the form of smartphone apps with varying criteria for a clean bill of health.

Vaccine passports, for example, are a popular way to tackle proof of immunity with jab rollouts under way across the globe.

There are also apps that accept positive antibody tests as proof of immunity for those who have had the virus and recovered.

But the World Health Organization has warned that there is no evidence to show that recovered Covid sufferers with antibodies are protected from a second infection.

This would only be valid within France’s borders but would allow a fully vaccinated person to, for example, eat in restaurants and attend certain events.

What do certain countries think?

The idea has not been without its critics in France, who worry that it could amount to coercion in a notoriously vaccine-sceptic country – however a trial has begun on two Air France routes of a digital pass which includes options for travellers to provide either their vaccine status or a recent negative Covid test.

Austrian Chancellor Sebastian Kurz has been one of the major proponents of a vaccination certificate at EU level. Known in Austria as the ‘Green Pass’, Kurz on Wednesday promised that vaccination certificates enabling international travel will be available from April for anyone who has received both doses of the vaccine, tested negative or recovered from the virus.

The Swiss government is in favour of an Israeli-style immunity certificate which would provide access to international travel as well as domestic benefits such as visiting restaurants and attending events.

In Italy, where authorities are struggling to speed up vaccinations, the government isn’t discussing vaccine passports – probably because so few people would actually be eligible for them. But commentators have expressed concerns that the scheme would discriminate against younger, healthy people, that it could expose sensitive personal data, and that it would amount to making vaccination compulsory when the Italian health ministry insists it should be voluntary.

In Sweden, which has announced its own plans for a digital ‘vaccine pass’, the Digitalisation Minister on Wednesday said he was positive towards the EU proposals “in principle” but said he had questions about some aspects of the plan.

China this month launched a digital health certificate for its 1.3 billion citizens that shows the holder’s vaccine status and virus test results.

Greece and Cyprus have vaccination passports specifically for travel to and from Israel, which has fully vaccinated 44 percent of its population.

Is it an official travel document?

No, and there is currently no effort under way to establish a required document to travel between countries.

The Chinese health passport is an attempt to make it easier for its citizens to travel abroad, but without recognition from other countries it is of little use.

For the moment, the applications are meant to facilitate various health checks still in place at different borders, with airlines among major proponents.

Through several of its member carriers, the International Air Transport Association has been offering a digital pass allowing passengers to easily prove their health status before boarding.

Can we make it official?

Making health passports stricter or requiring them for travel could invite legal challenges.

A major worry is that banning unvaccinated people from travelling would exacerbate inequality since access to jabs is far from universal.

According to the latest count by AFP, only 3.5 percent of the European population has been fully vaccinated so far.

There are also concerns over how applications would access users’ personal data.

In France, there is already an official database of citizens who have been vaccinated against Covid-19, approved by the country’s privacy watchdog.

Another day of mobilisation is also planned for Saturday, February 11th, however according to reporting by AFP, it will not involve any strike action from French national rail services, meaning trains run by SNCF are expected to operate normally on Saturday.

READ ALSO: 6 ways to get around Paris without public transport

Services will be severely disrupted on the Paris metro system, and RATP has recommended that those who can telecommute to work do so.

As in previous strikes, metro lines 1 and 14 will run normally, though you can expect large crowds, particularly during rush hour. The metro line 3bis will run normally as well. Keep in mind that line 14 will close at 10pm, as it usually does on Tuesday’s due to ongoing works to upgrade the line.

On other Paris metro lines, half of trains will run on line 4, but others will run on reduced schedules, with some only operating during the morning and evening rush hours. Lines 8 and 13 will see portions of the line closed, as well.

Keep in mind that some metro stations on lines that are operating may be closed.

Traffic will run normally on the tramline.

RER A – half of trains will run throughout the day.

RER B – half of trains will run throughout the day. Keep in mind that connections may be disrupted at Gare du Nord.

RER C – one in three trains will run

RER D – one train in six will run

RER E – two trains out of five will run

Regional TER trains will run three out of 10 trains on average on Tuesday, and services will be heavily disrupted across all French regions, including those connecting with the capital.

The Eurostar has cancelled seven trains running on Tuesday and one running on Wednesday morning. You can see which journeys will be impacted here.

On average, the Eurostar service will run three trains out of four.

Representatives from SNCF said that they expect that French national rail services will be “heavily disrupted” on Tuesday due to strike action. Only half of France’s high-speed TGV trains will run normally on Tuesday February 7th, representing less disruption than the day of action on January 31st where only one in three TGV lines ran according to normal operating times.

As for low-cost Ouigo trains, two out of five trains will run across the country on Tuesday.

Intercity and regional TER trains operated by the SNCF will also see services disrupted on Tuesday.

As for daytime intercity trains – SNCF will run two return trips on the Paris-Limoges-Toulouse, Bordeaux-Marseille and Nantes-Lyon lines. It will run one return trip on the Paris-Clermont line. No trains will run on the Nantes-Bordeaux and Aubrac (Clermont-Béziers) lines.

Travellers can expect normal services on the Paris-Nice nighttime intercity line. However, no trains will run on the Paris-Briançon, Pyrenean (Paris-Lourdes/La Tour-de-Carol) and Occitan (Paris-Toulouse) nighttime lines.

Transilien services will run an average of two trains out of three.

You can check to see if your journey will be affected by strike action by going to the SNCF website here – updated information will be available at 5pm on Monday, February 6th.

French national rail services told BFMTV that they recommend that travellers either cancel or postpone their trips for Tuesday.

International rail services will also be impacted by Tuesday’s strike action. Lyria (which connects France to Switzerland) will see about half of services run as scheduled, and Thalys services will be “slightly disrupted”.

There will be some cancellations of flights, but only those travelling via the Paris Orly airport. Ahead of Tuesday’s strike action, France’s Civil Aviation Authority asked the Paris-Orly airport to cancel one out of five flights.

Many schools in the capital will be fully or partly closed for the day – the last one-day strike saw at least a quarter of teachers walk out.

One of the major unions representing teachers, SNUipp-FSU said they expect at least 60 schools in the Paris region to close on Tuesday due to walkouts, and they said that they expect about half of teachers to strike on February 7th.

The demonstration in Paris will begin at Place de la Bastille at 2pm and it will walk toward Place de l’Opéra. Roads will be closed along the route.