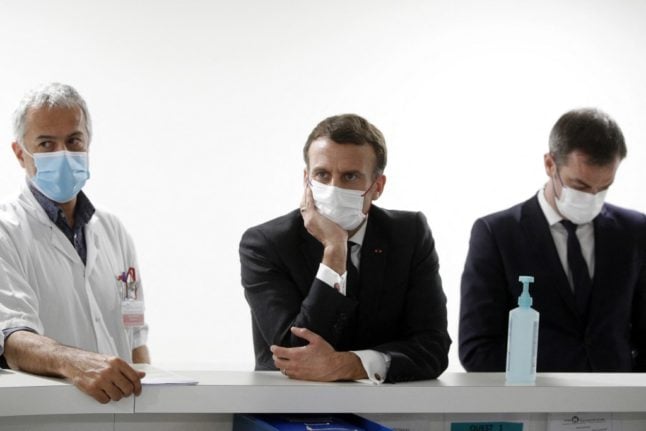 Macron met with staff working at the intensive care ward of the Poissy Saint-Germain-en-Laye hospital near Paris, where hospitals are struggling to cope with the high level of Covid-19 patients, on March 17th to decide on what measures to take in the region. Photo: Yoan VALAT / POOL / AFP

Prime Minister Jean Castex and Health Minister Olivier Véran will hold a joint press conference on Thursday at 7pm – which we will follow live here – the day after France recorded its highest number of daily Covid cases in four months.

The press conference is also expected to include the latest on France’s strategy for the AstraZeneca vaccine as the European Medicines Agency is due to hold a briefing on Thursday afternoon.

The government has been holding talks all week in order to decide what measures to take in order to slow down the epidemic spread and ease pressure on hospitals in hard-hit regions.

That same day Macron also met online with mayors from Île-de-France to discuss what form the looming new restrictions should take.

France recorded its highest daily number of coronavirus cases in nearly four months on Wednesday. In the past 24 hours, 38,501 new infections were registered, up from 29,975 the day before, and the highest number since November, the public health authority said.

The weekly average toll rose from 21,948 last week to has risen to over 25,000 this week, while the national incidence rate was at 250.1 new positive cases per 100,000 people on March 13th, the latest data available – more than the 250 “maximum alert” threshold set by the government.

The “positivity” rate – the proportion of positive results compared to the number of tests carried out overall – remained stable at 7.5 percent, but the number of people in intensive care declined slightly to 4,219, the data showed.

However the national figures hide wide disparities between regions with three areas – the northern Hauts-de-France region, Provence-Alpes-Côte d’Azur on the south coast and the greater Paris Île-de-France region – giving particular cause for concern with high case numbers and hospitals under severe pressure.

The Île-de-France region now has an incidence rate of 418 new cases per 100,000 people, above the 400 per 100,000 threshold that the prime minister set as the level for taking action in regions.

In total 4,239 Covid patients are in intensive care in France, the highest number since November 2020, and a quarter of those (1,177) are in Île-de-France. Hospitals in Paris have been forced to begin transferring some of the sickest patients to other regions and last week were ordered to begin cancelling non-emergency surgery to create more space in intensive care wards.

So what new restrictions are likely?

Parts of Hauts-de-France and Provence-Alpes-Côte d’Azur have already been placed under a weekend lockdown, but the Paris area has so far escaped.

All three of those areas, or at least some parts of them, face the prospect of tougher measures or the extension of measures already in place.

What is being proposed for Paris?

Speaking in a TV interview on Tuesday night, Castex said: “The moment has come to envisage measures for the Paris region.”

President Macron was reported as having said during the meeting with local officials that it would be “complicated” to impose a weekend lockdown in Île-de-France as “life is a bit different” there. According to French media the president was looking at “more tailored options” that would be in place “for a few weeks”, perhaps allowing for more outdoor activities.

“We have learned something since the first lockdown, and that is that being outside a quite good thing, if you don’t throw big parties,” the president was quoted as saying.

“Rather, we get infected in closed places when we eat, drink, sing and talk while removing the mask. But when you’re outside and can keep the distance, there’s a lot less risk. “

That could mean the government will avoid putting in place the 1 km rule restricting outings during the previous lockdowns, although all this remains to be confirmed by the prime minister Thursday evening.

“There is a significant probability that the Paris region will be locked down. Perhaps a weekday lockdown, with an 8pm curfew,” a senior government source is quoted as telling the French press.

Martin Hirsch, head of the AP-HP Paris hospitals group, told RTL radio: “If it is lockdown at the weekends only, it must be accompanied by very great vigilance during the week”, calling for greater use of remote working and extra testing in the area.

Paris City Hall initially proposed a complete three-week lockdown for the area, before backtracking and saying this was merely “a hypothesis”.

Case numbers vary between départements, with the highest numbers in Paris’ inner suburbs départements of Seine-Saint-Denis and Val-d’Oise, but Castex has previously said that measures would have to be imposed on a regional level, since the fluidity of the population – with many people working in Paris but living in the suburbs – would make restrictions on a département level ineffective.

What about the rest of France?

So far there has been little discussion of a return to national lockdown, with the government seemingly keen to continue with a regional strategy to contain the virus in problem areas while allowing more freedom for people in areas with low case numbers.

After Wednesday’s Defence Council meeting – where Macron and a group of ministers decide what Covid restrictions to take next – government spokesman Gabriel Attal seemed to confirm this, saying that “the localised strategy remains a good one”.

Attal also said: “We have decided to take supplementary measures in several areas.”

It is possible, however, that regional travel restrictions could return, in order to avoid the spread from high-risk to low-risk areas.

The high overall numbers mean the easing of restrictions such as the 6pm curfew or the closure of bars is at present very unlikely.

So far three areas of France have been placed under a weekend lockdown – Nice and a large stretch of the French Riviera, the northern town of Dunkirk and then the surrounding Pas-de-Calais département.

They were initially confined for two weekends, but all restrictions have now been extended. The weekend lockdown imposes a complete ‘stay home’ order at the weekend, with only essential trips out of the home allowed and attestations needed for all trips. This combines with the 6pm-6am curfew during the week.

READ ALSO What are the rules for the parts of France on weekend lockdown?

But are these measures actually effective? Especially as travel between regions is still allowed, leading to long traffic jams out of Nice on the Friday afternoon before the first weekend lockdown as people simply left the city.

It’s three and a half weeks since the first lockdown weekend, so it may be a little early to tell but initial indications are encouraging. The incidence rate in Dunkirk has dropped from 959 cases per 100,000 people to 673 and in Nice’s Alpes-Maritimes département from 528 to 460. In Pas-de-Calais, where the measure was imposed a week later, incidence rates continue to rise but more slowly than before the lockdown.

In hospitals, occupancy rates have so far shown no decrease, either rising or staying level to give ICU occupancy of 111 per cent, 100 percent and 120 percent for Alpes-Maritimes, Dunkirk and Pas-de-Calais.

In previous stages of the epidemic, the effect on hospital occupancy usually comes several weeks after case numbers begin to fall, so while the lockdown will hopefully shortly produce an effect on the situation in hospitals, it seems clear that this is not a ‘quick fix’ solution. 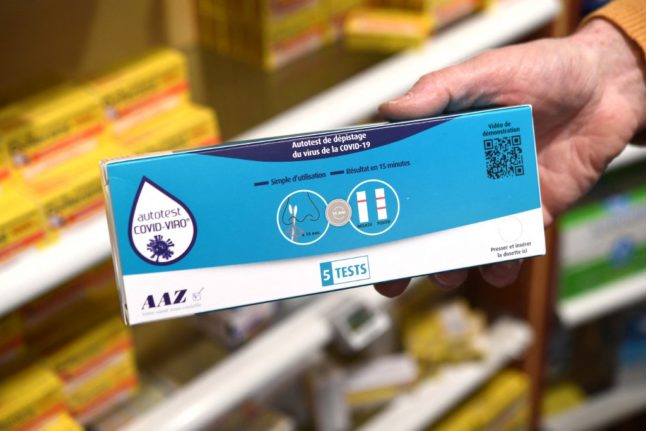 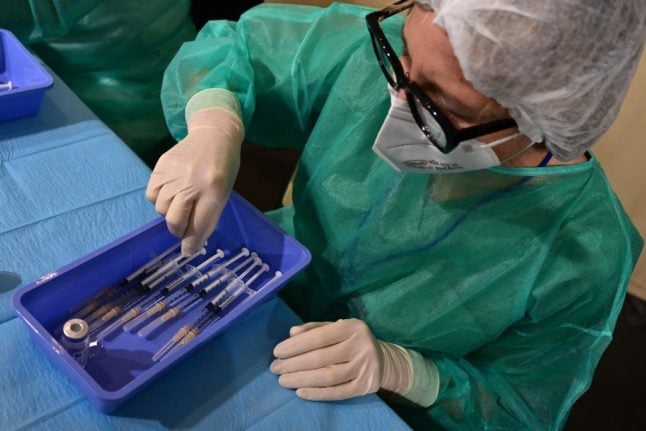