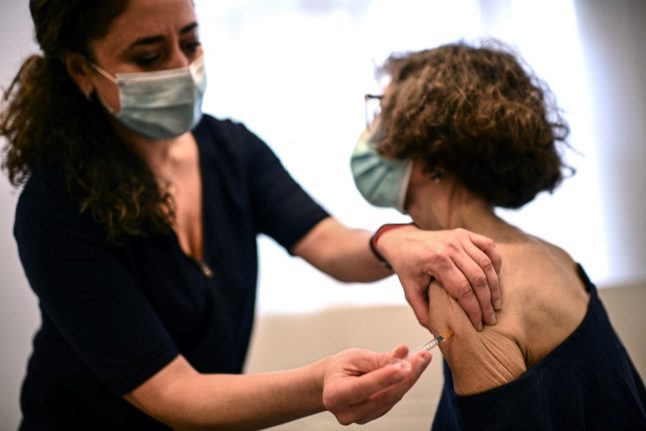 A doctor injects an AstraZeneca dose to a patient in Paris, on February 25th. Photo: Christophe ARCHAMBAULT / AFP

Alain Fischer, an immunologist who heads the government’s vaccination advisory board, said a higher number than normal of pulmonary embolism – blood clots in the lungs – had caused alarm at the weekend.

“It’s the fact that there were a few very unusual and troubling cases which justify this pause and the analysis,” Fischer told France Inter radio, adding that until the weekend there had been no increase in the number of embolism cases that are typically observed.

“It’s not lost time,” he said of the suspension. “It’s necessary time to carry out analysis.”

President Emmanuel Macron announced the suspension Monday as France followed the example of a host of other European countries including Germany, Ireland and Denmark to stop using the vaccine while regulators assess its safety.

UPDATE: Which countries in Europe have suspended AstraZeneca vaccinations?

“We are in a situation where there is a rational scientific doubt,” Fischer said.

“I hope that this doubt will be lifted by colleagues who are working on this issue… afterwards, obviously we will need to resume our work of teaching and explaining, which will not be easy, I’m aware of that.”

Prof. Alain Fischer, who is in charge of France's vaccine strategy, says there were not many clotting incidents after AZ vaccinations. "It's the fact there were a few atypical and troubling cases that justify this pause and analysis". https://t.co/HjRq32CGFa

Perceptions that the AstraZeneca vaccine is less effective than rivals from Pfizer and Moderna and has more significant side-effects, such as mild flu symptoms, meant that uptake of the jab had already been slow in France.

ANALYSIS: Why are French health workers so reluctant to get the Covid vaccine?

The health ministry revealed at the beginning of March that three in four jabs delivered by AstraZeneca had gone unused.

“Transparency is the first step in creating confidence. We’re in a situation where everything that is known is said, and all the doubts are raised,” Fischer said.

Experts at the World Health Organisation and European regulators are to meet Tuesday to assess the vaccine’s safety, with AstraZeneca and the British government insisting that the reports of blood clots should not be linked to the vaccine.