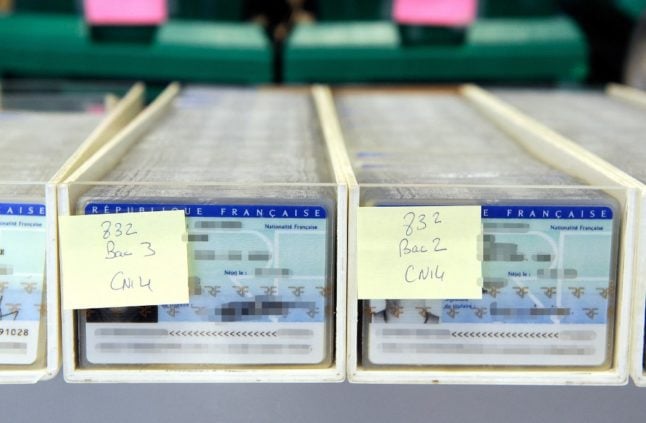 France's old ID cards will be gradually phased out and replaced with new ones. Photo by JEAN-PIERRE MULLER / AFP

The French government formally approved the new cards through a decree published on March 14th.

The département of Oise, to the north of Paris, will be the first to rollout the new ID cards from March 16th.

The new cards will then be progressively rolled out to other parts of the country, first to département Seine-Maritime from March 29th, French media reported.

From August 2nd officials across the whole of France will be able to distribute to the new cards to applicants, which means authorities will stop issuing the old ones.

The old form of the ID card will remain valid until 2031 so those who have one won’t need to do anything until it expires.

READ ALSO: What counts as an official form of ID in France?

🇫🇷 France finally joins the ranks of countries using a credit card-sized ID, which means we will at long last be able to carry our ID in a reasonably sized wallet 🤩
…
don't sneer, thanks. https://t.co/ODK3OUWUZu

How do the new cards work?

The new ID cards look similar to the old ones, but they are smaller and equipped with an electronic chip and a QR code.

The electronic chip will contain all the personal information that is stated on the physical card (name, date of birth, nationality etc), including the picture, in addition to two fingerprints (except for children under 12 years old). The QR code is a CEV, or cachet électronique visible, which is an electronic signature that works as an authenticity stamp. A cachet is called a ‘seal’ in English, and the QR code will allow access to certain data.

Citizenship Minister Marlène Schiappa said the new cards were a key step in fighting identity theft, as it would be easier to detect cases of fraud.

“It’s first and foremost a question of protecting everyone’s identity,” she said as she presented the new cards to French daily Le Parisien on Monday. “Every year, more than 30,000 people are victims of identity theft.”

The new cards will be valid for 10 years, shorter than the current 15 years.

Only French citizens can get an identity card in France, not residents.

It will be possible to travel within the European Union with the new cards but not to the UK from October 2021.

The EU had requested that all member states take their identity card schemes online in order to streamline rules across the bloc. France had until August 2nd 2021 to conform to the EU rules.

For a detailed breakdown of what the new cards look like, see Le Parisien’s article: HERE.