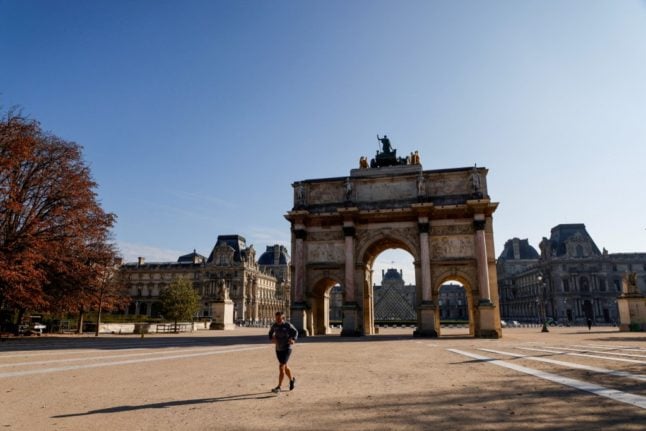 With two national lockdowns, a 6pm curfew and weekend lockdowns in place in some areas, life has been greatly restricted for much of the last year, with bans on international travel a particular hardship for foreigners in France unable to see loved ones in other countries.

But in among the worry, boredom, loneliness and financial hardship there have been some positive sides to the last year, and here our readers have shared some of the good things that have come out of this extraordinary period.

For most people life got a lot slower – international travel was largely out, for much of the year even a trip to the boulangerie required a permission form and for many people their daily commute shrank to a walk from the bedroom to the living room.

The lack of alternative activities has lead many to get to know their local area better, while people who live in areas usually busy with tourists have enjoyed the unaccustomed quiet.

Hedda Berander, who lives in Chamonix in the French Alps, said: “My most positive memory is getting to experience springtime in what’s normally an extremely busy ski resort, but last year became a stunning remote valley where you couldn’t do much else than take walks and watch the seasons change, snow give way to flowers, and (once the proper lockdown ended) go cycling on almost deserted Alpine roads.
“It was a change of pace I didn’t know I needed. And I will treasure that spring for the rest of my life, despite the weeks when I had Covid, and the financial struggles and uncertainty that came with everything shutting down.
“In fact, I’m feeling very torn because while I, like so many others, am relying on tourism to make ends meet, I think that this past year has been a true eye opener to me in terms of how wildly unsustainable mass tourism is, especially in environmentally fragile areas like the Alps.”

Her sentiments were echoed by Targuin who lives in the Vendee département on France’s west coast, usually a very popular spot with tourists, who said his favourite thing was “not having to put up with hordes of visitors in the area” before adding his recipe for lockdown happiness: “Have a glass of a decent Saunterne, a decent slice of foie gras and read a good book.”

Many Parisians also saw a new side of the usually bustling city.

Patricia Ziegler said: “I loved being able to take photographs of sites in Paris that are usually swarmed with tourists” while Frances Charteris said: “I loved walking through empty streets at any time of day, and taking photographs standing in the middle of car-less boulevards. I love the warmth and friendliness in familiar stores, and the wonderful jazz playing in Leemo Co-op, rue de Lancry.”

While there has been plenty of justified criticism of some aspects of the French response – particularly the slow vaccine rollout – many Local readers found that the dual perspective of being a foreign national in France gave them greater appreciation for the French system.

Jim Lockard, who lives in Lyon, said: “My admiration for the French healthcare system has only increased – just about everything is easier and less expensive than in the US.

“The willingness of our local shopkeepers and employees in Lyon to report for work and do their jobs so well, especially during the lockdowns, despite danger to themselves has been inspirational.”

Susanne D’Arcy, who lives in Vauclause added: “I feel that the government’s rules in lockdown have been very clear and concise with no ambiguity.”

Several people also commented on the fact that the French people have largely followed the strict rules for more than a year now.

Philip Edward in Hérault said: “The French people are very resilient. They are also obedient when it comes to a major health issue. The politeness is still there despite the lack of handshakes and kisses.”

Michael FitzGerald in the Deux Sevres département added: “The majority of locals have obeyed the lockdown rules in good heart.”

For people running a business through a year when many sectors closed almost completely, there was also much to be thankful for in the French government’s comparatively generous financial aid packages.

Jessica Hammer, living in Toulouse, said: “It hasn’t been perfect, but the assistance to small businesses struggling due to the crisis has been so much better in France than in other European countries.

“I’m in the tourism sector and I talk with colleagues in Spain, Italy, Germany, the UK, and more. Most of them haven’t received even a 10th of the financial support that France has given to small businesses here – and in some cases their government has made it even more difficult for them to put themselves into hibernate to wait out the crisis. If I have to live somewhere during Covid, I’m so thankful it’s France.”

Karen Jones in the Var département added: “Curfew is a very small inconvenience. France has managed a very effective lockdown – juggling giving people as much freedom as possible, balancing the economy and coping with medical pressures.

“We have gone a long period now with shops and schools open, which is quite amazing. Compared to UK months of schools, shops and work place closed and yet still highest country for deaths. It’s been wonderful to support our local businesses.”

Many people have also enjoyed the simple pleasures of spending time with family and taking long walks.

Haitham Karajay in Paris said: “It was a good chance to be close as a family, we got a puppy and that was amazing.”

Jim Lockard said: “We have spend time just about every day in parks and walking along the river in Lyon.”

Liz Watkins-Young in Dordogne said: “I think how lucky we are to be able to live in a rural area and enjoy much more space and freedom than we could in the UK.

“We appreciate the care shown by our neighbours and on the whole the way most people have respected Covid restrictions (even though they don’t like it much).”

Lockdown was a pretty extreme experience even for people who have been in France a long time, but for recent arrivals it was a real baptism of fire, but some readers managed to find the positives even in that.

Gill Reynolds of Haut-Vienne said: “We moved over permanently 18 months ago and during confinement, one of the few things we could do was walk the dog.

“As we were restricted at times to just 1km radius, I met and became friends with most of my fellow town dog walkers – both French and English – something that may not have happened if we were less restricted. Even now, I see quite a few of them before curfew around our town chateau. That has been a real positive. Also the fact that we had to stay put helped us settle in better.”

Robert Grindon moved to Mazamet in south west France during the second national lockdown. He said: “I had a very bumpy ride to get here, with my wife, eight-year-old son and small dog in tow, once we had moved into our rental in the hills and found the stillness they had to offer I think we all just stopped going at 100 miles an hour like it is back in the UK and smelt the coffee.

“We have an offer on a house and look forward to moving in around May time, we love it here and the people smile at us, and engage in conversation.

“I will not say it has not been tough, but I would not go back to life in the UK and just wish we had made the move years ago.”

Thank you to everyone who shared their experiences here. We know this has been a really tough year for a lot of people and we appreciate the time people have taken to share their positive moments with us.