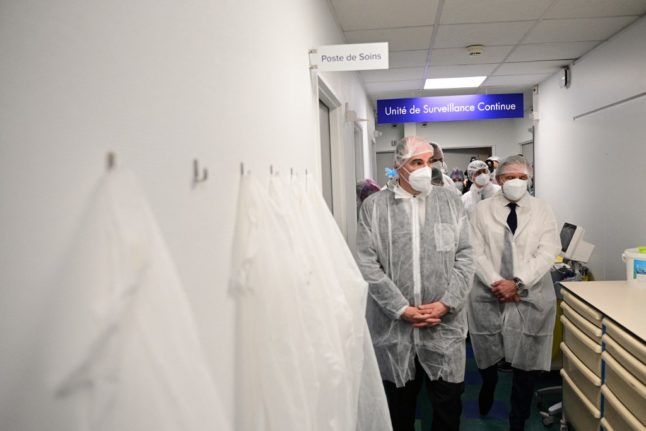 “I treat everyone the same way,” the prime minister said on Sunday, as he explained why the government had decided against imposing local lockdown in Paris and its suburbs, when it had done so in other areas with similar Covid numbers.

Castex justified their decision by saying they issued local lockdowns “when the (Covid) incidence rate was 400 per 100,000 inhabitants,” a threshold he said had not yet been reached in the Paris region as a whole.

“As long as the numbers have not been reached” in Île-de-France, Castex said, “we cannot take the same measures.”

Castex was speaking to Twitch, an online platform essentially dedicated to video games, but which gathered on average 5 million visitors per month in France in 2020, mainly young people.

While the prime minister’s office declined to confirm to French media that the 400 per 100,000 incidence rate mentioned was an official threshold for imposing a local lockdown, his comments indicated that this will be one of the key indicators examined during the upcoming Defence Council meeting on Wednesday, where the government will decide on what new Covid measures, if any, to take.

“We will without doubt have to take new decisions in the coming days,” French President Emmanuel Macron said Monday, during a state visit in the southwestern département Tarn-et-Garonne, where he also announced that France would suspend the use of the AstraZeneca Covid vaccine for 24 hours.

What is the current situation?

Macron has found himself in a squeeze following his February gamble that a third nationwide lockdown was avoidable, hoping that the accelerated vaccination campaign would allow it to keep the virus at a manageable level.

But in some regions Covid rates kept rising to the point that the government decided to impose local weekend lockdowns in the hardest-hit areas, including Nice and 62 other towns on the French Riviera and the entire northern département of Pas-de-Calais.

So far, Paris and its suburbs have been spared, despite Covid patients filling up the region’s hospitals to the point that authorities have begun emergency patient transfers to other parts of the country. But, as local Covid numbers worsen, this week the government will have to – once again – consider imposing lockdown measures in the Paris region this week.

What does the PM’s new threshold mean for Paris?

This number has grown in Paris for months, but the pace has quickened over the past few weeks and has now nearly reached 400 per 100,000 inhabitants for the region as a whole.

The graphic below shows how Île-de-France’s incidence rate (red) has developed since the beginning of the pandemic compared to that in France as a whole (blue). The gap separating the two has increased in size since mid February, which is when the new variant of the virus first discovered in the UK began to dominate the Paris region.

Breaking it down on a départemental level, several areas in the Paris region have already passed the threshold. The suburban départements of Seine-Saint-Denis, Val de Marne, Seine-et-Marne and Val-d’Oise all had incidence rates over 400 on March 11th.

The northern suburb of the capital Seine-Saint-Denis suffered the highest one, reporting 486.9 new cases per 100,000 inhabitants.

In comparison, Pas-de-Calais had an incidence rate of 421.7 per 100,000 inhabitants. As a result, three of the Paris region’s départements – Val-de-Marne, Val d’Oise and Seine-Saint-Denis – had surpassed the Covid case levels of the only French département with a weekend lockdown.

The map below shows France’s incidence rates broken down on a départemental level.

The reason for that is simple: it is difficult to differentiate between the départements in Île-de-France, due to the region’s highly integrated populations, many working in one département and living in another.

This is why both the government and local authorities have stressed that measures imposed in one Paris département must be taken in all the others, and why the region’s collective incidence rate could be crucial for the upcoming decision on whether or not to impose a weekend lockdown.

What about the hospitals?

Prior to Castex’s interview this weekend, the key indicator for whether a lockdown could be avoided or not was the hospital’s ability to cope with patient flows – the intensive care unit rate of critically ill patients.

Île-de-France reported an intensive care unit rate of 98.9 percent on March 14th, according to government data, which meant Covid patients had filled up all of the country’s intensive care wards. Authorities this week began an emergency patient transfer to other parts of the country.

With all this, why don’t they just lock down Paris?

With all this in mind, it can be difficult to understand why the government hasn’t already imposed a lockdown in Île-de-France, and French media have reported that Health Minister Olivier Véran argued in favour of doing so last week.

However, there are several possible reasons behind why Macron is postponing the decision.

The economic impact. Paris is the economic motor of France, representing some 30 percent of the national GDP. Locking down the capital again would further hinder the government’s attempt to get the country back on its feet financially following the two nationwide lockdowns in 2020, which left the economy reeling.

The social impact. Many Parisians live in small apartments without access to gardens or greenery. The 2020 lockdown saw severe mental health consequences for people across France, but the situation was especially difficult for those living in areas with high levels of poverty, such as the suburban département of Seine-Saint-Denis. Studies have shown that a lockdown amplifies a range of social problems such as domestic violence, alcoholism and depression. Above all, the government wants to avoid closing down schools like it did last spring, knowing that this had negative social consequences, both for children and parents (who had to juggle remote working and childcare), and especially for those in lower-income households.

Symbolism. It may be a local measure only, but locking down the capital would place severe political pressure on Macron, who publicly backed the gamble to avoid a third lockdown, especially as he faces heavy criticism for the country’s slow-paced vaccination campaign.

So what about vaccinating the Paris region?

The number of people having received their first dose of the vaccination in France reached 5 million this weekend. Of these, 2,220,608 had received both injections, meaning France had fully vaccinated 3.31 percent of its population out of the 60 percent required to achieve herd immunity.

Despite having given out the highest number of doses in France, Île-de-France lagged behind the rest of the country when corrected for population size, with only 6.17 percent of its population having received one injection by March 13th, the lowest on the mainland (see map below) – although the area’s comparatively young population may also be a factor since older groups are prioritised for the vaccine. Speeding up the Covid vaccination campaign in France’s most populous region is key, and the government promised to bulk up the stocks in Île-de-France, sending over 25,000 extra doses this weekend.

READ ALSO: Why have three quarters of France’s AstraZeneca vaccines not been used?

So will there be another lockdown in Paris?

The only thing that is certain right now is that nothing is certain. The government will likely make the decision on whether to take extra measures in the Paris region on Wednesday during the Defence Council meeting, and what shape these measures, if any, will be.

As the prime minister said Sunday during his interview with Twitch: “Imposing a lockdown is a very tough decision, and we can only take this measure when we have tried everything else.”