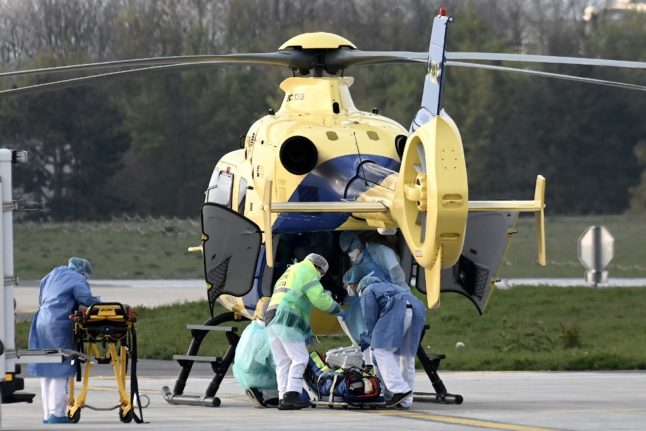 The region of Île-de-France is transferring intensive care patients to lesser-hit regions in an attempt to prevent a third lockdown. Photo: Philippe Lopez/AFP

The greater Paris region of Île-de-France has so far escaped a third lockdown, unlike other hard-hit areas like the French Riviera and the northern Pas de Calais département.

But a steep increase in intensive care patients in the region surrounding Paris is worrying authorities with intensive care units struggling to find beds for patients.

Under-pressure hospitals will now transfer patients to lesser hit regions, particularly in the west of the country, by air but also specially equipped TGV trains.

With the transfers, officials hope to avoid a new lockdown for the roughly 12 million people in and around the capital. Of the nearly 4,100 Covid patients currently in intensive care nationwide, around 1,100 are in Paris-area hospitals.

“By the end of this week, probably around 100 patients will have been evacuated from the Île-de-France region”, government spokesman Gabriel Attal said at Orly airport

On Saturday, the first three patients were transferred via helicopter from Île-de-France to hospitals in the western cities of Nantes, Angers and Le Mans.

According to BFMTV, three more transfers for patients in the Val-de-Marne département, south-east of Paris, were planned for Sunday. One will be taken to the Pays de la Loire region by helicopter, while the others will be taken to the south west Nouvelle-Aquitaine region

Later this week, two specially equipped trains will transfer “several dozens of patients to regions that today are under less strain” from the pandemic, Attal added.

Asked if Paris would avoid a new lockdown, Attal said “we are doing everything we can to not have to take more difficult, more restrictive measures.”

On Thursday, in the government’s weekly press briefing, health minister Olivier Véran said the number of patients in intensive care was worrying. One patient is admitted into intensive care “every 12 minutes” in île-de-France, he said.

These mass transfers, which would see patients taken to hospitals around France by train, require extremely careful logistics and preparation, Frédéric Adnet, medical director of SAMU in Seine-Saint-Denis, told BFMTV.

On Thursday, prime minister Jean Castex said “we should be ready to take additional measures at any moment”, but for now, the government was not considering a new weekend or total lockdown in Île-de-France.

The French Riviera around Nice and the norther coastal city of Dunkirk – two coronavirus hotspots – were placed under a weekend lockdown last month.

Paris Mayor Anne Hidalgo said she opposed the government’s proposal to impose a weekend lockdown in the French capital and its surrounding region, calling it ‘inhumane’.

A 6 pm curfew remains in place across France and restaurants, cafes, cinemas, theatres and large shopping centres have been shut, but the average daily number of new Covid cases has continued to climb steadily in recent weeks.