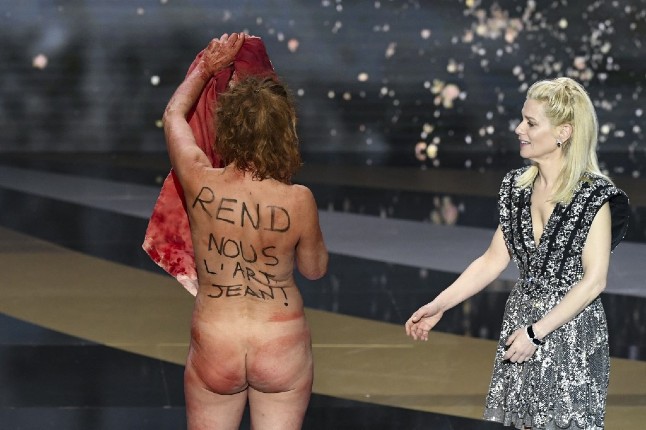 Dupontel’s comedy drama “Bye Bye Morons”, about a seriously ill woman searching for her child, was the big winner on the night, taking home seven awards.

There was a fiercely political air at France’s annual celebration of cinema,as frustrations were unleashed over the months-long shutdown of theatres.

The country has seen mounting protests in recent days over the closure of cultural sites, with several theatres occupied by activists and students.

That frustration was centre stage at Friday’s awards, with actress Corinne Masiero stripping naked with the words “No culture, no future” written across her front as she presented the costume award.

Others used the stage to confront the government over its decision to keep cinemas shut since October, even as most other businesses have reopened.

“My children can go to Zara but not the cinema… it’s incomprehensible,” said Stephane Demoustier as he picked up the Cesar for best screenplay for “The Girl With a Bracelet”.

The mood was set from the opening monologue, as mistress of ceremonies Marina Fois launched a scathing attack on Culture Minister Roselyne Bachelot.

“The minister hasn’t done nothing… Madame Bachelot, you released a book with your recipe for pasta and gorgonzola,” the actress joked, before striking a sad note to conclude: “What we miss is what unites us, the emotions that we
experience together.”

Also hanging heavy over the ceremony was the memory of last year’s disastrous event, in which the decision to award veteran Polish director Roman Polanski — accused of multiple sexual assaults and the statutory rape
of a 13-year-old girl — led to stars walking out and police teargassing protesters outside.

The entire Cesar academy board resigned in the build-up to the 2020 ceremony due to the uproar over Polanski’s nominations for his film “An Officer and a Spy”, which many saw as proof of the French industry’s failure
to respond to the #MeToo movement.

This year’s first awards signalled that the academy was keen to embrace calls for greater ethnic diversity, with the most promising actor and actress awards going to Jean-Pascal Zadi and Fathia Youssouf.

Zadi’s film, “Tout simplement noir”, plays on racist cliches about black people in France, while 14-year-old Youssouf won for her part in the controversial Netflix film “Mignonnes” about teenage girls caught between the pressures of Senegalese society and social media.

“The rules of the game are changing, not so that the game stops, but so that it can be played fairly this time,” said host Roschdy Zem at the start of the evening.

But the big winner on the night was “Bye Bye Morons”, a comedy drama about a seriously ill woman searching for her long-lost child, which took home seven awards including best film and best director for Albert Dupontel.

There were no major controversies to match Polanski’s inclusion last year, though some noted that much more work was needed on equality given the presence of only one woman in each of the best film and best director categories.

Much of the drama this year has been behind the scenes, as the academy scrambled to rebuild itself and its reputation with a new board under Veronique Cayla, former head of cultural channel Arte, and director Eric Toledano.