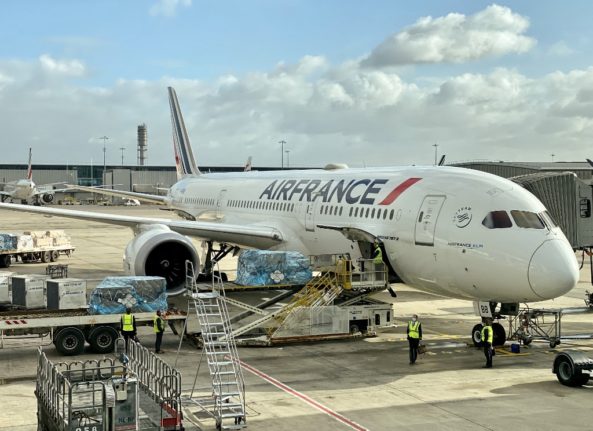 Will travel to France be opening up again? Photo: Daniel Slim/AFP

What is the trial?

The trial as announced on Thursday by transport minister Jean-Baptiste Djebbari is limited in its scope, so people shouldn’t get too excited just yet.

It’s a month-long trial and will be run by Air France on flights between France and the overseas territories of Gaudeloupe and Martinique.

Although these are long-haul flights they technically count as domestic travel within French territories, so this does not affect any international travel.

The rules on travel into France remain, for the moment, the same.

That is, travel from outside the EU remains almost entirely banned with only limited exemptions for essential travel – see HERE for the full list of reasons.

Travel from within the EU and Schengen zone into France is allowed for any reason, but requires a negative Covid test and extra paperwork at the border.

How does the pass work?

The pass being trialled is a phone app, onto which passengers will have to upload either a vaccination certificate or a recent Covid test.

At present in France there are several different ways to get a Covid test, not all of which offer digital proof, while there is also no vaccine app, so a lot of work needs to be done to ‘link’ proof of either vaccinated status or a negative Covid test to the app.

And that’s just for travel within France, adding tests or vaccine certificates from other countries will add further complications.

“The goal is to see if it works well in real-time” by reducing checks that are drastically slowing boarding and arrival procedures, Djebbari told RMC radio.

“It could offer a preview, or at least a large-scale test, of a future ‘travel pass’” that would “ensure against fraud and shorten waiting lines,” he said.

If it works, will France reopen its borders?

At present, France’s non-EU borders are closed ‘until further notice’ and there is no date for a review on border rules.

Things are unlikely to change in the short term as the health situation in France is still fragile, with 30,000 new cases recorded on Wednesday and some parts of the country being placed under weekend lockdown as hospitals struggle to cope.

Is this the same as the EU’s vaccine passport scheme?

The French trial is separate, but the app as described sounds similar to the EU’s proposed ‘green pass’ laid out by European Commission chief Ursula Von der Leyen earlier this month – it is digital and it has options to present either a vaccination certificate or a recent negative Covid test for those who either cannot be vaccinated or who have not been able to access a vaccine so far.

The EU Commission will examine legislation around this later in March and Von der Leyen’s statements suggest that it would be rolled out for travel within the EU and Schengen zone first, and then expanded to allow travel in and out of the Bloc.

The EU’s external borders have been closed since March 2020, with exemptions only for essential travel.

There is currently no timescale, but the EU has been talking about using the pass for travel in ‘the summer’.

And is France likely to approve this?

There has been some controversy in France over the idea of vaccine passports, with some fearing they amount to ‘coercion’ for people to be vaccinated and others saying they are unfair on those still waiting for a vaccine, but by adding an option for a Covid test instead, this app seems to bypass that problem.

Announcing it, Djebarri added that the pass was intended only for cross-border travel and does not foreshadow a broader Covid vaccination requirement for travel or other activities, such as going to restaurants or the cinema.